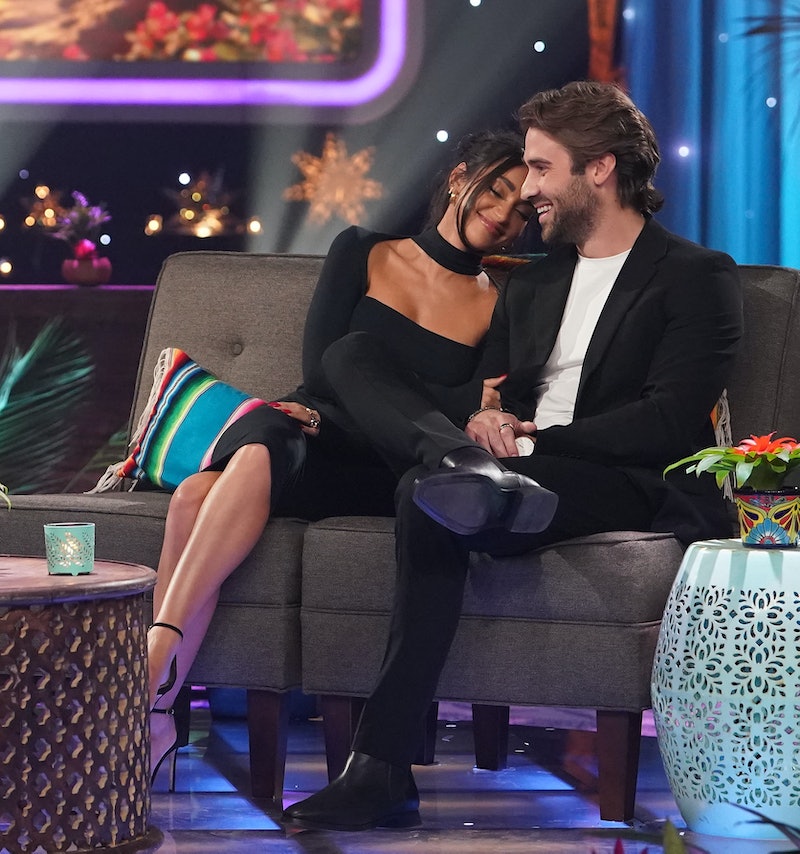 Despite getting engaged to Johnny DePhillipo on Bachelor in Paradise, Victoria Fuller started a relationship with Greg Grippo after her time on the show. Even though Victoria and Greg (an alum from Katie Thurston’s Bachelorette season) made their couple debut during the Paradise Season 8 reunion, several questions remained about their relationship: from cheating claims to those rumors regarding a thrown wine glass.

Victoria and Greg recently went on Nick Viall’s podcast to talk through it all — starting with her and Johnny’s breakup. After the beach, Victoria said, she “was trying not to be frustrated” by Johnny’s lack of career direction. He would pivot between rapping and real estate, for example, “which is fine, you’re just trying to figure it out,” Victoria added, “but that’s frustrating for somebody who thought that they were engaged to somebody who already had it figured out.”

Victoria said, “things [got] toxic so fast,” and explained the argument that led to her throwing a wine glass three weeks into their post-Paradise relationship. They were watching The Bachelorette, and she said Johnny made a comment about how he should’ve been the next Bachelor. Victoria told him that likely wouldn’t have happened, to which he reportedly replied, “yeah, coming from somebody who was known to be a homewrecker.” This hurt Victoria, and it led an argument where she threw a wine glass — not at him, specifically, though. “That was f*cked up of me to do,” she said.

She also said Johnny asked her, “why [she was] being such a f*cking c*nt,” and they went to therapy about it. But she knew there was “no going back,” and ended things.

Victoria and Greg connected at the end of September. While they first thought it wasn’t “good timing,” they decided to get together anyway. “It was weird hiding out,” Greg said, adding that their trip to Rome in October “changed everything.”

“I’m like, ‘let’s f*cking do this. Like, let’s get wigs if we actually notice people seeing us,’” Greg said. No one did until fans spotted the couple near the Colosseum.

During the podcast, Victoria also called out Tyler Norris for interjecting at the Paradise reunion: “It was none of his f*cking business ... Tyler, we weren’t in a three-way, OK buddy? So stay the f*ck out.” There was initially some reluctance about Greg appearing at the special at all. “We care about this relationship so much, and we wanted to protect it,” Greg said. “There was no question towards the end ... I just need to support her. No matter what, I’m going out there.”

Victoria and Greg revealed on the podcast that they’re officially in love — they told each other on Halloween — and will be moving in together in Nashville soon. “He just came home to Boston to meet my family,” Victoria said. “And they love him.”

More like this
Rachel Responded To 'Bachelor' Fan Theories About Her TikTok With Clayton
By Grace Wehniainen
Kaitlyn Bristowe Said Chris Harrison Ignored Her After Her 'Bachelorette' Hosting Gig
By Grace Wehniainen
Zach Addressed His "Boring Bachelor Energy" After His Group Date With Latto
By Grace Wehniainen
All The Clues Zach & Christina Are Together After 'The Bachelor'
By Grace Wehniainen
Get Even More From Bustle — Sign Up For The Newsletter
From hair trends to relationship advice, our daily newsletter has everything you need to sound like a person who’s on TikTok, even if you aren’t.