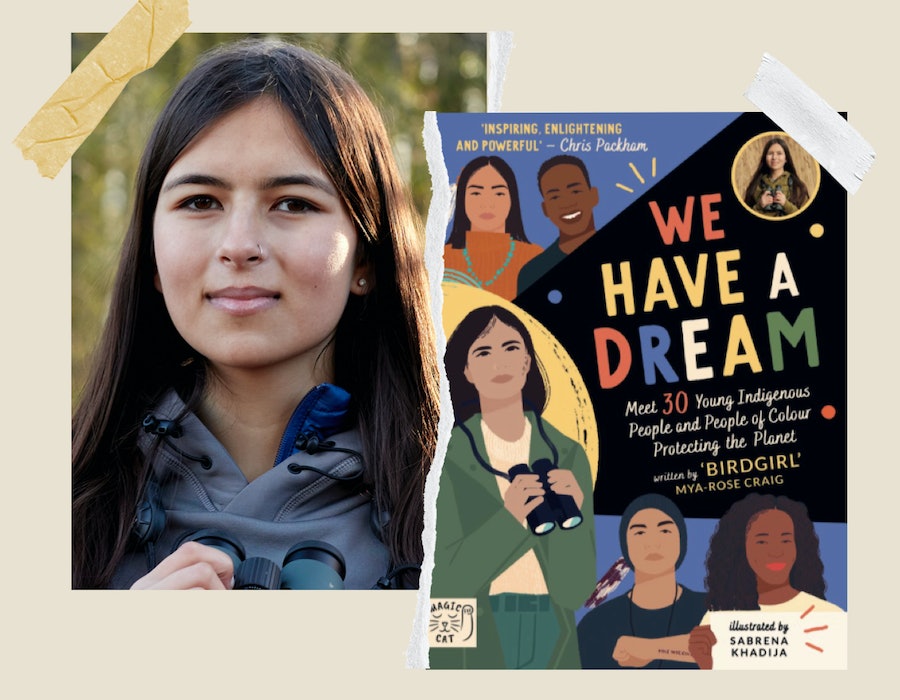 In a week that’s been overshadowed by the bleaknesses of the IPCC 2021 climate report, Mya-Rose Craig is one of those Gen Z-ers that really does give you hope for the future. At the age of 11, she began birdgirl, a blog where she documented her journey with ornithology. Now 19, she is thought to be the youngest person to have seen half of the world’s birds and has channelled her passion for birdwatching into world-changing climate activism.

At the core of Craig’s activism (which has seen her speak at a youth strike in Bristol, travel to the Arctic Circle to launch a climate protest, and earn an honorary doctorate degree before the age of 20) is a message about inclusivity and anti-racism. In 2015, she set up Black2Nature, a group that campaigns for equal access to nature and has run camps, activities, and conferences for more than 200 young people.

At the beginning of August 2021, Craig was able to add a new title to her CV: author. In her new book, the young activist continues her work fighting for inclusion and making sure marginalised voices are placed at the heart of the climate discussion.

For We Have A Dream, Craig spoke to 30 Indigenous people and people of colour from around the world to hear their experiences, and about being left out of global climate conversations which so often spotlights white European activists. Each individual shares insights into how their communities were disproportionately being affected by the climate catastrophe, the rising number of climate refugees in their region, and what their dreams are for the future of the planet. Each interviewee is a climate activist in their own right, with specific areas of focus of their own, including: wildlife conservation, clean water, air pollution, or plastic waste.

Below is an excerpt from We Have A Dream in which we hear from Craig herself as well as three of her interviewees: Autumn Peltier, an Anishinaabe Indigenous clean water advocate from the Wiikwemkoong First Nation on Manitoulin Island, Ontario, Canada; Vanessa Nakate, a Ugandan climate justice activist and UN youth sustainability leader; and Lesein Mutunkei, a deforestation activist from Kenya and founder of Trees For Goals.

'We Have A Dream' by Mya-Rose Craig
Bookshop.org

Excerpt from We Have A Dream by Dr Mya-Rose Craig

Indigenous people and People of Colour are disproportionately affected by climate change. And yet they are under-represented within the environmental movement. Not anymore.

I believe that to protect the environment is to leverage the input and contribution of as many people as possible. But it is not for me to speak for others.

The time has come for people to speak for themselves.

The COVID-19 pandemic has proved that governments are willing to act in extraordinary ways to protect the well-being of their citizens. The impending environmental crisis demands no less action. During lockdown, I spoke to thirty young campaigners from indigenous communities and communities of colour experiencing the stark reality of our changing planet. OUR conversations MADE CLEAR a united dream.

A dream for climate justice.

A dream for a healthy planet.

A dream for a fairer world, for all.

Autumn spent her childhood on the shores of Lake Huron, one of the largest freshwater lakes on Earth, and comes from the territory of Wikwemikong, a First Nations reserve on Manitoulin Island in Canada. Autumn realised the importance of clean water after taking part in a ceremony in a village that had no access to it. “People my age didn’t even know what a drinking water tap was. They had to boil water in big pots,” Autumn explains.

In the Global North (the richest and most industrialised countries), getting clean water is something that most people may not pay attention to, but this is not the case everywhere in the world. Canada is one of the world’s wealthiest countries, but there are First Nations communities who aren’t able to drink their water as it’s contaminated by pollution and oil pipelines. Autumn thought this was unacceptable.

Campaigning has been in Autumn’s family for a long time, and her great-aunt Josephine Mandamin was known as the ‘water walker’. Josephine was the Chief Water Commissioner for the Anishinabek Nation until she died in 2019. Autumn reveals, “Even though my great-aunt is not with us anymore, she’s still my biggest mentor.” Soon after, Autumn was appointed the Chief Water Commissioner and became known as the ‘water warrior’. Why? Because when addressing the United Nations General Assembly, Autumn told them to “Warrior up!”

Autumn lends her voice to the most vulnerable communities when speaking to people in positions of power. In 2016, she met Canadian Prime Minister Justin Trudeau and expressed her upset about his decision to allow an oil pipeline project to proceed. The Assembly of First Nations Youth Council was so inspired by Autumn’s bravery that it created a fund to help protect water for future generations.

Autumn thinks it’s important for people to speak up for the next generations, “as it can make a huge impact,” she says. This is a global issue, and Autumn encourages everyone to join the fight.

After graduating from university, Vanessa was surprised to learn that climate change was contributing to the poverty in her community in Uganda. Climate change and rising temperatures were causing periods of low rainfall which led to limited access to food and clean water.

So, Vanessa organised a strike against the government’s inaction on climate change. For several months she was the only protester standing outside shops, petrol stations and even the gates of Parliament. But not for long. Soon people responded to her calls on social media, and Vanessa founded Youth for Future Africa.

In January 2020, Vanessa attended a conference with other climate activists, including Greta Thunberg. When a photograph of the event was published, Vanessa had been cropped out and the picture only showed four white climate activists. In response, Vanessa tweeted: “You didn’t just erase a photo. You erased a continent. But I am stronger than ever.” She received messages of support from other climate activists who had similar experiences, but had lacked the courage to speak out. Ever since, Vanessa has felt a greater responsibility to amplify their voices because if they are not heard, climate justice cannot be achieved.

Vanessa is passionate about uplifting marginalised climate activists because, she says, “It is their communities that are suffering the most from climate change.” Countries in the Global North, such as the United States, are the biggest contributors to climate change, but they experience the effects of it the least. For the Global South, including countries like Uganda, it is a much greater problem for a lot of the people who live there. Many climate activists want to change the lives of the people in their communities, but this is not possible if they are not given the platform or resources to do that. Vanessa embraces everyone’s story, and uses shared experiences as a source of energy to keep pushing for climate action.

Did you know that in the time it takes to say ‘deforestation’, a section of forest the size of a football pitch is destroyed? Lesein was twelve years old when he found out that Kenya was losing 500 square kilometres of forest each year, the equivalent of 164 football pitches every day. Lesein loved to play football in the forests near his home, going almost every day, and realised they could disappear if nothing was done.

Planting trees is a great solution to the climate crisis as they absorb carbon dioxide in the air as they grow. Lesein started small and began planting trees at his grandmother’s house in Nairobi, the capital of Kenya. But soon he wanted to make a bigger impact, which meant a bigger commitment. He loved football and so for every goal he scored, he decided to plant a tree, calling his initiative Trees 4 Goals.

Then, Lesein thought, as every goal is a collaborative team effort, what if for every goal scored eleven trees were planted, one to represent each player on the team? His football team loved the idea, and his school adopted it in all of their sports teams. Soon, together they had planted almost 1,000 trees!

Lesein’s school was so impressed with his achievement that they nominated him to attend the first United Nations Youth Climate Summit. At fifteen years old, Lesein was one of the youngest people there, and when he returned, he planted a tree with the President of Kenya.

This experience gave Lesein the confidence to think even bigger. He is now passionate about the possibility of an eco-friendly society. “It is up to us to do the best we can to give the planet to our children so they can experience the beautiful nature we have,” he says. He plans to reach out to famous football players to help create a forest of Trees 4 Goals in each county in Kenya, then a forest of Trees 4 Goals in each country in Africa. Lesein believe that football can connect, engage and inspire young people to take action to achieve a greener future.

More like this
Gen Z Are Twice As Likely To Identify As Queer, According To New Data
By Sam Ramsden
The UK Government Is *Finally* Banning Conversion Therapy
By Sophie McEvoy
Here’s Where The NHS Nurses’ Strike Currently Stands
By Sophie McEvoy
'Brookside' Is Coming Back & Soap Opera Fans Are Going Wild
By Sam Ramsden
Get The Very Best Of Bustle/UK
Sign up for Bustle UK's twice-weekly newsletter, featuring the latest must-watch TV, moving personal stories, and expert advice on the hottest viral buys.