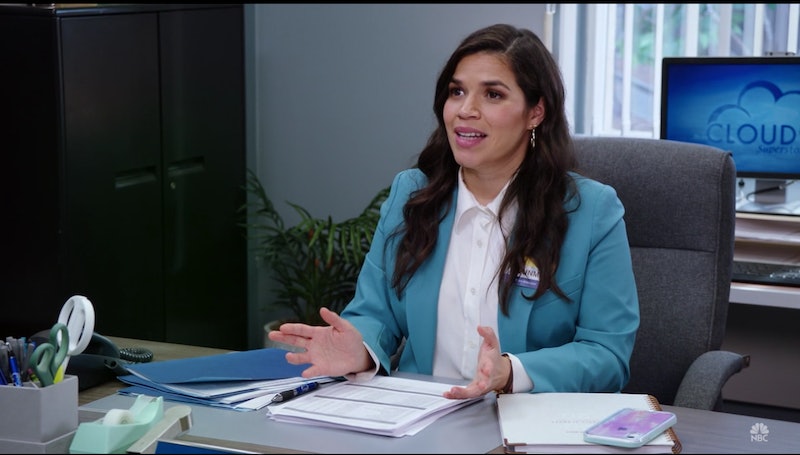 Attention shoppers! Amy Sosa is returning to Cloud 9 — a massive change of events following the announcement that Season 5 would be her last. The NBC Superstore Instagram announced the exciting news on March 10 and revealed that during the one-hour Superstore finale airing March 25, America Ferrera would make her way back to the store she and her character called home for many years. Hopefully, she’ll tie up some loose ends along the way, too.

In February of last year, NBC announced Ferrera would leave the show at the end of Season 5, despite having renewed the comedy for another season, according to EW. Ferrera, who played store manager Amy Sosa and served as an executive producer since 2015, initially left the show to focus on her family and the next phase of her career.

NBC announced Ferrera's departure early, but last March, the COVID-19 pandemic made it impossible to complete Superstore Season 5 as planned, with 21 of 22 episodes filmed. As a result, Ferrera appeared in not one but two episodes of the current season, including the sitcom's 100th episode, to wrap up her storyline. Superstore showrunners Jonathan Green and Gabe Miller also incorporated the coronavirus pandemic into Amy's departure, which was set into motion last season when she accepted a corporate job in California. The second episode of Season 6 focused on Amy's last day at Cloud 9, and according to Green and Miller, it served to "fully give her the sendoff she deserves." Despite the disruption caused by the pandemic in both the real world and the world of the show, they added that they wanted her storyline to end on a positive, hopeful note.

It remains to be seen if Amy will get back together with Jonah in the series finale, but her returning after only recently moving to California might suggest she’s had a change of heart. Amy’s return could also help set up the characters for the upcoming Bo and Cheyenne spinoff.

In February, Ferrera issued a statement about leaving the popular sitcom, calling the five years she spent working on the show "the most rewarding, enriching, and enjoyable years of my career," per EW. The star also thanked creator Justin Spitzer for inviting her to be a part of "the funny, smart and relevant world of Superstore." She added, "I wish only the best, and much continued success, to my beloved Superstore family."

More like this
A New 'And Just Like That' Table Read Pic Confirms A Key Character's Return
By Jack Irvin and Grace Wehniainen
Everything To Know About 'RHONJ' Season 13
By Brad Witter and Jake Viswanath
Nicola Coughlan Shared A Lady Whistledown Excerpt From ‘Bridgerton’ Season 3
By Grace Wehniainen, Alyssa Lapid and Sam Ramsden
The First 'Percy Jackson & The Olympians' Teaser Comes With An Ominous Warning
By Grace Wehniainen
Get Even More From Bustle — Sign Up For The Newsletter