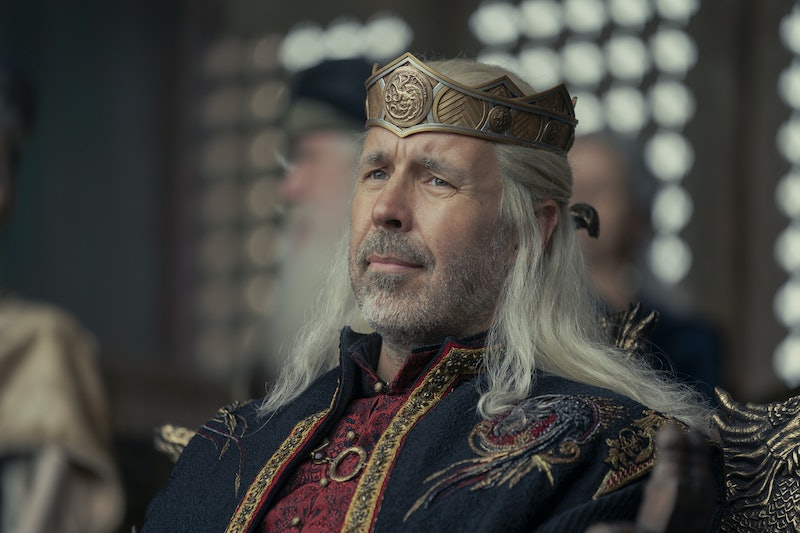 Spoilers ahead for the Fire & Blood book and House of the Dragon Episode 8. If you’ve been keeping up with House of the Dragon on HBO, you’ve probably been wondering when King Viserys would die. Not because you hate the guy (he’s actually OK, as far as Game of Thrones characters go), but because the event was always bound to kick off some pretty pivotal drama. Specifically, in the book, Viserys’ death catalyzes the Dance of the Dragons — the civil war over who will succeed him on the Iron Throne.

Finally, during Episode 8, Viserys died on House of the Dragon — and as director Geeta Patel confirmed to Entertainment Weekly, it’s a done deal. “I think the last scene of this episode was always a litmus test,” she said. “Every time we’d watch or think it through, when we got to that last scene, did we feel what we wanted to feel there? Did we feel the loss? Did we feel that Viserys has told his story? Did we feel that he loved his wife who passed away? Did he love Alicent? Did he love Rhaenyra? Did he regret anything? All the complicated layers of Viserys, did we feel it for better or worse?”

Now that you’ve seen it happen on screen, you may be wondering: what does Viserys’ death look like on the page? The king dies in 129 AC, at the age of 52 years old, by which point he was just about “elderly,” Inverse pointed out, due to the Targaryens’ average lifespan. The cause of death? Surprisingly, he simply dies in his sleep. According to Screen Rant, he does injure himself on the Iron Throne, like Viserys did on House of the Dragon, but that happens later in his life.

By contrast, House of the Dragon made Viserys’ death much more of a drawn-out event that loomed over the entire storyline (which, to be fair, does make for good TV). There were plenty of clues that Viserys was nearing his end, too — like Episode 6, for example, where a very fatigued Viserys was particularly preoccupied with a rat, an apparent symbol of his own inner decay.

As he watched the rodent scurry around, an off-screen monologue from Larys drove home the point: “What are children but a weakness? A folly? A futility? Through them, you imagine you cheat the great darkness of its victim. You will persist forever, in some form or another, as if they will keep you from the dust.”

Paddy Considine, who played the king, revealed on Entertainment Weekly’s West of Westeros podcast in September that Viserys’ illness was “a form of leprosy,” and suggested that the onscreen version of his character was a younger man facing death — not a wizened leader reaching the natural end.

“His like, body is deteriorating, his bones are deteriorating,” Considine explained during the Sept. 11 episode. “So he’s not actually old. He’s still a young man in there ... he’s just unfortunately got this thing that’s kind of taken over his body. And it becomes a metaphor for being king, and the stress and strain that it puts on you, you know? What it does to you physically, what it does to you mentally.”

So in the end, Viserys’ death wasn’t too different from what happened in Fire & Blood. Of course, if you’re into the business of fan theories, you know that this wasn’t always a given. In fact, as Esquire pointed out earlier this season, there were several other theories about how and when Viserys might die on the show — including a dragon killing him with fire, or tetanus caused by the Iron Throne.

More like this
'Bridgerton' S3 Teases Exciting Social Season For Penelope Featherington
By Bustle
Lib & Will’s Romance In 'The Wonder' Is Very Different From The Book
By Sam Ramsden
The First Trailer For 'That '90s Show' Includes So Many Nods To The Original Series
By Jack Irvin, Alyssa Lapid and Grace Wehniainen
Matt Smith Proves He's Daddy Daemon In This Viral 'House Of The Dragon' Video
By Marina Watts
Get Even More From Bustle — Sign Up For The Newsletter

This article was originally published on Sep. 18, 2022