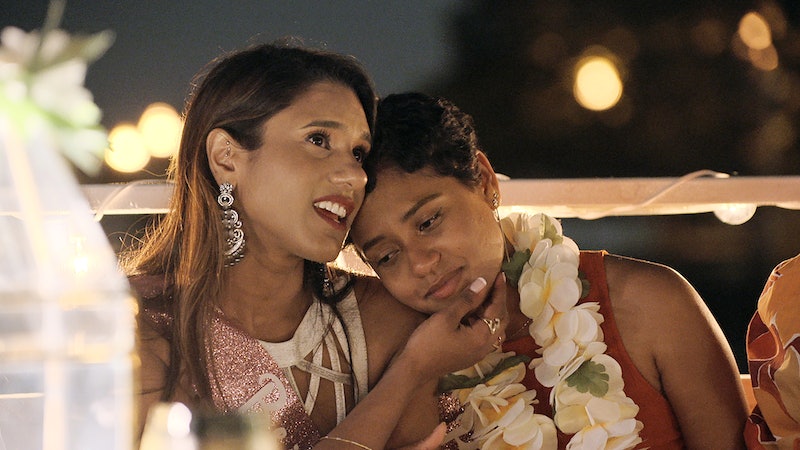 It’s been seven months since Love Is Blind Season 2 aired on Netflix, but there have been plenty of updates on the pod pairings since. Deepti Vempati and Kyle Abrams hinted at a possible relationship on social media — a welcome development for many fans. After not going through with their wedding, Shayne Jansen and Natalie Lee tried dating for a bit, but ended their relationship due in part to “flirtatious messages” Shayne had allegedly exchanged with other women, according to Natalie. Ultimately, both of the couples who did get married during Love Is Blind Season 2 — Jarrette Jones and Iyanna McNeely, and Nick Thompson and Danielle Ruhl — announced plans to get divorced this August.

It’s a lot to keep up with, and it’s made even more complicated by the mystery of when the Love Is Blind reunion filmed. A card at the end of After the Altar, which premiered Sept. 16, reads that the Love Is Blind divorces took place “since filming,” but that might be a little vague for viewers who want the specifics. Fortunately, there are a few clues that point to exactly when Season 2’s After the Altar filmed.

According to BuzzFeed, Love Is Blind Season 2 was filmed from April to June of 2021. During After the Altar, cast members make references to “the past year,” and there’s snow on the ground, suggesting that filming for After the Altar must have taken place sometime in late 2021 or early 2022.

The Love Is Blind alums’ social media posts offer up some other clues that narrow down the filming dates even further. Virtually everyone in After the Altar shared photos from what looks like the same winter destination around the weekend of March 11.

People reported at the time that the cast was gathering for Natalie’s birthday — which, of course, is also the occasion the pod alums were celebrating in After the Altar.

This is also around the time Page Six reported that Shaina Hurley and Christos Lardakis were engaged — which, of course, happens off-camera during the events of the reunion special. So if you do some math, it seems that about six months have passed between the events of After the Altar and its premiere Sept. 16.

If you’re wondering where After the Altar was filmed — maybe you want to take a cozy (but hopefully less dramatic) group vacation? — that appears to be a place called Apple Blossom Resort in Michigan.