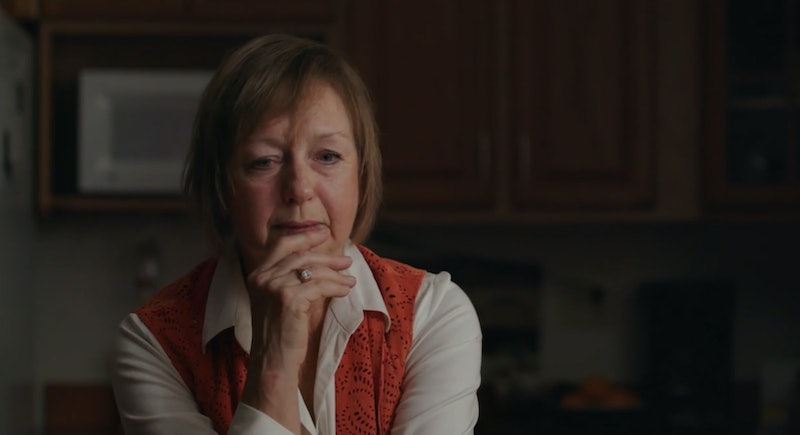 In the new HBO true crime docuseries Murder on Middle Beach, facts are gathered in an attempt to solve the murder of Barbara Hamburg. Barbara was the mother of series director Madison Hamburg, and she was brutally murdered in front of her Connecticut home in the morning hours of March 3, 2010. No one has ever been charged with the crime in the ten years since, and the documentary explores several theories while gathering evidence related to the murder. One of the more intriguing theories relates to the Gifting Tables, an alleged pyramid scheme to which Barbara belonged as a member. Barbara was introduced to the group by Jill Platt, who was her aunt by marriage. After Barbara's death, The Gifting Tables had an infamous downfall, so where is Platt now?

The Gifting Tables was a women-only "support group" that conducted secret meetings in its members' homes. As Bustle's previously reported, members joined by giving a "gift" of $5,000 to the table that they joined. These tables were made up of four levels. New members were on the bottom row, "the appetizers," which maxed out at four members. The second level, "soups and salads," consisted of three members. Row two, "entrees," had two members, and the top row — "dessert" — had one. Once a table reached eight new members, the "dessert" would earn $40,000 — the sum of the eight members' entry fees — and would leave for another table. The existing table would then split in two, with the two "entrees" now becoming the "desserts" of their own respective tables and all other members moving up accordingly, according to the U.S. Department of Justice.

During her appearance in Murder on Middle Beach, Platt shows little remorse for her role in the Gifting Tables and claims that she did nothing wrong. But the government disagreed. After an anonymous member reported the group to the Attorney General of Connecticut, authorities began investigating the Gifting Tables as a pyramid scheme, according to the doc. Ultimately, two high-ranking Gifting Tables members faced charges and were convicted of crimes: Donna Bello and Platt. Platt was arrested in 2012 and was convicted in 2013 on charges of wire fraud, filing false tax returns, and conspiring to defraud IRS, according to the New York Daily News. Platt was originally sentenced to 54 months of imprisonment and three years of supervised release, per the Justice Department. But in Dec. 2016, Platt had her sentence reduced to 30 months in prison.

At the time, she had mostly stayed out of prison due to court appeals, and had served just seven months of her initial sentence, according to the New Haven Register. With the paper reporting that Platt was to begin serving her 30-month sentence in Jan. 2017 and receiving credit for the seven months she already served, she hypothetically should have been released in Dec. 2018 after serving 23 additional months behind bars. But in the docuseries, Platt states that she was released from prison in May 2019, and returned to her Connecticut home in Nov. 2019.

Presumably, that's where Platt — who is now in her early 70s — remains today: back on the Connecticut shoreline. But her life is far different than it was back in her Gifting Tables days. Her husband passed away prior to her trial, and she claims in Murder on Middle Beach that she "lost all her family" because of her criminal conviction.

More like this
Lori Vallow Faces The Death Penalty For Allegedly Murdering 2 Of Her Children
By Brad Witter
Where Is Armie Hammer’s Ex-Wife Elizabeth Chambers Now After 'House Of Hammer'?
By Grace Wehniainen and Radhika Menon
This House of the Dragon Character Will Create Another Scandal For Rhaenyra
By Kadin Burnett
'House of The Dragon' Episode 6 Will Take Place A Decade After Episode 5
By Kadin Burnett
Get Even More From Bustle — Sign Up For The Newsletter