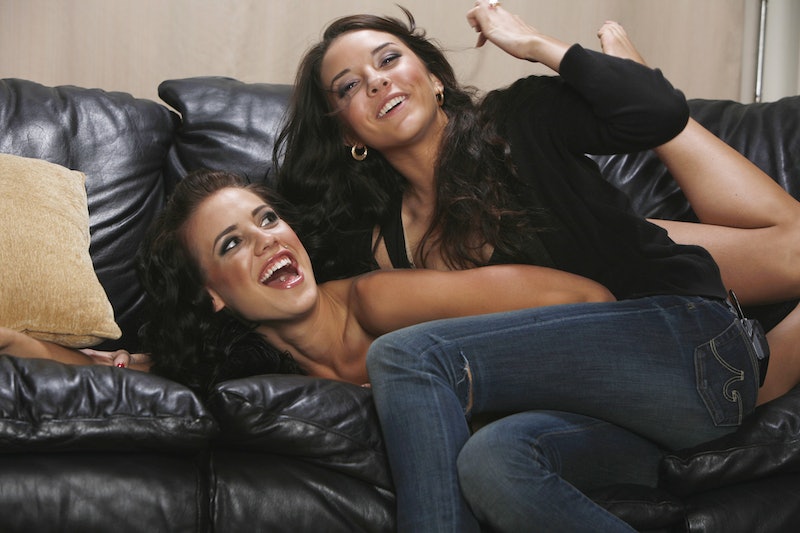 When the short-lived reality show Pretty Wild premiered E! in 2010, few could have imagined that people would still be talking about it in 2022. But when its stars became unexpectedly embroiled in — the “Bling Ring” — the series struck gold. Now, Netflix’s new reality docuseries, The Real Bling Ring: Hollywood Heist, has brought Pretty Wild and its stars, Tess Taylor and Alexis Neiers (now Alexis Haines), back into the cultural consciousness.

The Bling Ring has been endlessly documented, from Pretty Wild to journalist Nancy Jo Sales’ infamous Vanity Fair article about the heists to Sofia Coppola’s fictionalized film based on the article. Now, The Real Bling Ring returns to the subject almost a decade later. It also functions as a reunion of sorts for the cast of Pretty Wild, including Haines, her younger sister Gabrielle Neiers, and her mother Andrea Arlington. But Tess Taylor, Haines’ “adoptive” sister and a key cast member in Pretty Wild, chose not to appear in the show. Her absence raises obvious questions Taylor’s current whereabouts, and why she chose not to participate in the show.

So, where is Tess Taylor now? Below, what the former Pretty Wild star is up to in 2022.

Who is Tess Taylor, and how did she wind up on Pretty Wild?

Tess Taylor (née Adler) was a family friend and, eventually, foster sister of Alexis Neiers, a member of the Bling Ring. According to Sales’ Vanity Fair reporting, Neiers and Taylor met “in ballet class when they were toddlers.” Later, as teenagers, Taylor was “taken in” by Neiers’ family due to Taylor’s complicated family situation. (She told Sales that her mother “kinda fell off the face of the planet.”)

Alexis Haines told The Cut that neither of them was attending traditional high school by the time they were 16 years old, and that they were instead focusing on breaking into Hollywood while studying for the GED. In The Real Bling Ring, Alexis says that her mother, Andrea Arlington, encouraged her and Taylor to work as pin-up models at the age of 16, which Arlington denies. Regardless, the two girls did wind up taking dubious modeling gigs — as background actors in a Marilyn Manson music video, for instance — and spent much of their free time partying.

By the time Pretty Wild began shooting, Taylor was 19 and was auditioning for Playboy. Arlington had done the same earlier in her career.

What happened to Taylor after Pretty Wild, and where is she now?

Pretty Wild was short-lived, in part due to Haines’ involvement in the Bling Ring and subsequent criminal charges. The show ran for nine episodes before it was canceled.

In January of 2011, Taylor checked herself into a rehab facility in Malibu for opioid addiction. The following year, Taylor was arrested for drug possession and entered rehab once more. Happily, however, Taylor has remained sober for the past 10 years, ever since her second stint in rehab. In 2019, she appeared on Haines’ podcast, “Recovering from Reality,” along with the other cast members of Pretty Wild, in order to discuss her experience of addiction and sobriety. “I absolutely loved letting people know that deep, dark black hole recovery is possible,” she said. “We are living proof.”

Currently, Taylor goes by Tess Amber, and lives in Wisconsin along with her partner and their two young daughters, River and Meadow. Her relationship with Haines has changed over time. In 2019, Haines told E!, “She lives in Wisconsin now, she has a beautiful family. I'm so happy for her, like, the fact that she made it out too… that's a miracle. It’s just, sometimes, you have to realize that these relationships, dumping all my time is not serving either of us anymore… [But] I’ll always consider her family. And I’ll always love her very much.”

What does Tess Taylor think about The Real Bling Ring?

As mentioned above, unlike Alexis Haines, Gabrielle Neiers, and Andrea Arlington — as well as Bling Ring member Nick Prugo — Tess Taylor chose not to participate in Netflix’s show. Despite that decision, she features prominently in the series as a former cast member of Pretty Wild… and she’s not thrilled about it.

“Netflix, this is Tess calling,” she posted to her Instagram on September 22. “I’m calling to let you know how disappointed I am in your shitty documentary that I asked not to be a part of, but I’m somehow really a part of.”

She also posted about her frustrations with the show to her Instagram stories on the same day, writing, “You guys… I’m really not happy about how much I’m featured in this. As someone who was asked to be involved & DENIED that opportunity, i feel like i am wayyyy too involuntarily involved in this project. We all know they got big checks for this… i as usual, make nothing lol. And it’s not just about the money. But COME ON… If they planned to use me this much, i should be compensated. Am i wrong for feeling this way???? I’m kinda heated writing this, so maybe I’m wrong. But i don’t feel wrong.”

The next day, however, she’d decided to “drop it.” “I’ve said my piece,” she announced, before sharing another, final message: “Not doing them how they did you is what’s keeping your blessings coming.”