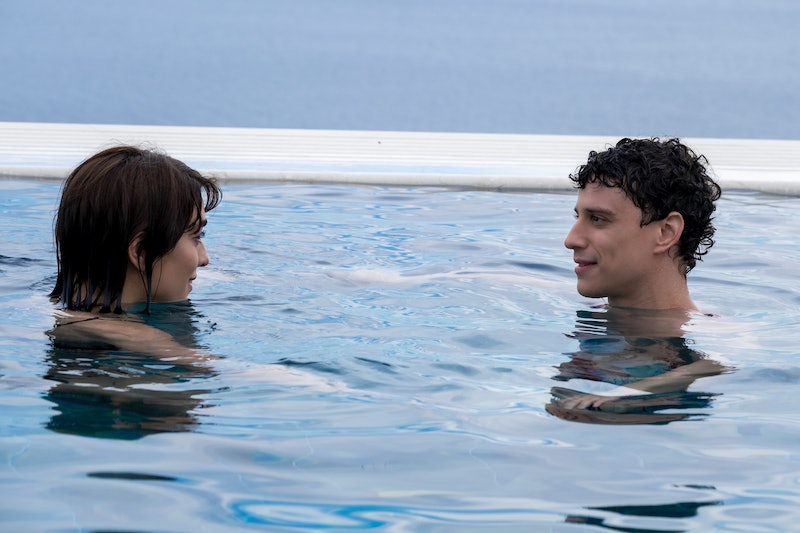 It’s impossible to predict every twist and turn on The White Lotus — like Episode 5’s very wild, uh, family bonding scene. But there’s one thing viewers can be certain of: a dead body (er, bodies?) by the end of this very messy vacation.

After Daphne finds a floating corpse in the first scene of Season 2, Valentina, the resort manager, is informed that “a few” additional dead guests have been discovered nearby. Since then, the question of who dies on The White Lotus Season 2 has naturally been the subject of plenty of fan theories.

Some have been debunked — like, for example, the suggestion that orange flourishes in characters’ costumes might predict who’s going to die. White Lotus costume designer Alex Bovaird recently assured Bustle that, no, “orange is just a very popular color in the stores right now!”

Of course, there’s much more speculation where that came from. Below, some of the top White Lotus Season 2 theories worth considering as we await the season finale on Dec. 11.

Remember the Testa di Moro bust we see when Cameron, Daphne, Ethan, and Harper first get to their rooms? As Rocco explains, it represents the story of a woman who beheaded a lover who didn’t tell her he had a wife and kids. And, well, Cameron has both of those things, and is also unfaithful! Granted, Daphne doesn’t seem to mind (it’s implied she has a lover of her own), but she doesn’t necessarily need to do the killing for the Testa di Moro’s prophecy to come true.

Or Is It Ethan?

Cameron has definitely been painted as the bad guy this season — but as we know from last season’s victim, being the worst person on vacation doesn’t necessarily mean you’re going to die for it. Wouldn’t it be a cruel twist if Ethan died instead? He is the one who first asked about the Testa di Moro sculpture, after all, and he did technically cheat on Harper. He didn’t go as far as having sex with anyone else (that we’ve seen, at least), but he kept a lot from Harper until she wrested the truth from him.

That’s Lucia Or Mia In The Water

Valentina’s first reaction when she hears about the dead body in the water is to shrug it off. “It’s fine, the ocean is not hotel property,” she says. This could just be her way of avoiding any liability from the get-go, of course. But it’s also similar to the dismissive way Valentina speaks to Lucia and Mia in the hotel, telling them “the hotel is for guests only.”

A smaller potential clue? As several viewers have pointed out, the body Daphne encounters in the water does seem to have smooth, shaved legs, like both of the women.

Fans have been worried about Albie’s “nice guy” nature all season long — and several posit that he might try to put on a brave act for Lucia and lose his life in the process.

Plus, as GQ observes, Albie is shown next to a painting that depicts a martyr who was killed for his beliefs, which definitely doesn’t bode well for the young traveler.

Tanya’s Husband Has A Dangerous Secret

As several viewers pointed out, the “cowboy” Quentin tells Tanya about could have been her husband, Greg — suggesting he wanted her out of the picture for her money (and her man).

That theory was seemingly proven true during the penultimate episode, with Tanya discovering an apparent photo of young Quentin and Greg together.

Creator Mike White did previously tease to Deadline that he’d like to take Tanya to different locations in future installments of The White Lotus, as he and Jennifer Coolidge are friends in real life. So her fate feels somewhat more secure than the other characters — but still, it’s not fun knowing that Tanya is being manipulated.

Portia Gets Caught In The Crosshairs

If not Tanya, then what about her travel companion, assistant, and (debated) style icon, Portia? Several users point out that her fate might be foreshadowed by The Godfather, which has been referenced several times this season — and whose plot involves a woman being killed in an attack meant for someone else.

More like this
'The Last Of Us' Video Game Revealed Tess’ Fate In The HBO Series
By Brad Witter
The 'Gossip Girl' Reboot Creator Is “Looking For A New Home” To Air A Potential Season 3
By Brad Witter
The 8 Best Aidan Shaw Moments On 'Sex And The City'
By Grace Wehniainen
'The Last Of Us' Star Bella Ramsey Almost Didn’t Take The Role Of Ellie
By Grace Wehniainen
Get Even More From Bustle — Sign Up For The Newsletter
From hair trends to relationship advice, our daily newsletter has everything you need to sound like a person who’s on TikTok, even if you aren’t.

This article was originally published on Dec. 3, 2022