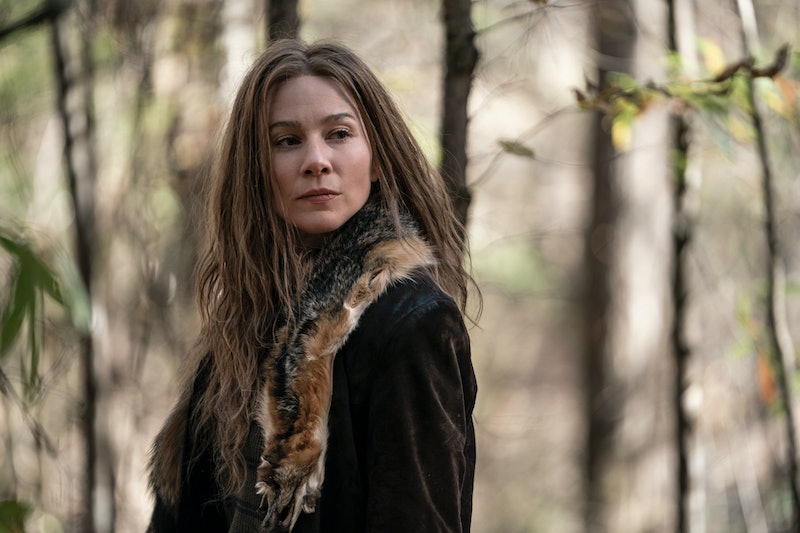 Spoilers ahead for The Walking Dead Season 10, Episode 18. The Walking Dead fans already knew that Daryl spent years living on his own after Rick's apparent death, but in Episode 18, "Find Me," we finally got a chance to see what he was up to all that time. The episode, largely told through flashback segments, was partially an origin story for Dog and partially a tale of... woodsy, star-crossed romance?

Yes, Daryl finally found himself an apocalypse fling with a stranger named Leah (Lynn Collins). While on his own, he stumbled upon her cabin and a puppy we now know to be Dog (named, surprisingly, not by Daryl but by Leah). We learn that she'd been fending for herself after losing her family, including an adopted son, and generally preferred the solitude until Daryl came along. However, one day Daryl came back to the cabin to find her gone — she couldn't deal with his reluctance to commit, apparently — and left a note for her to come "find me."

It's a surprising first for Daryl, who's never been romantically linked to anyone on the show despite having close friendships with Carol, Beth, and most recently Connie. The woodsy backdrop and tragic love story lent a Virgin River feel to the episode, and it all would have been very sweet and romantic if not for the fact that we still don't really know: who is Leah?

Though we learned a few small details about the mysterious woman in the woods, Leah doesn't seem to have a counterpart in The Walking Dead comics and Daryl doesn't even exist in them. That could make their relationship exciting, but it will likely disappoint fans who hope Daryl will end up with Connie, his good friend who has been missing since earlier in Season 10, or even Carol.

To be fair, Daryl didn't know Connie before starting a relationship with Leah — remember, this all took place in the recent past — so their reuniting and getting together is absolutely still a possibility. But the open-endedness of his note to Leah to "find me" seems to suggest their time together isn't over.

Unfortunately for Daryl, the mere act of remembering Leah is bringing him down. Even though he and Carol made up last season, things seem to be more tense than ever between the besties. In a tearful fight, Carol tells Daryl that he should have let her stay on that boat... and, heartbreakingly, he agrees. Though the Leah situation is precariously up in the air, and Carol and Daryl don't seem to be doing great, we can at least rest assured that they'll have to sort things out somehow. They have a spinoff to get to!