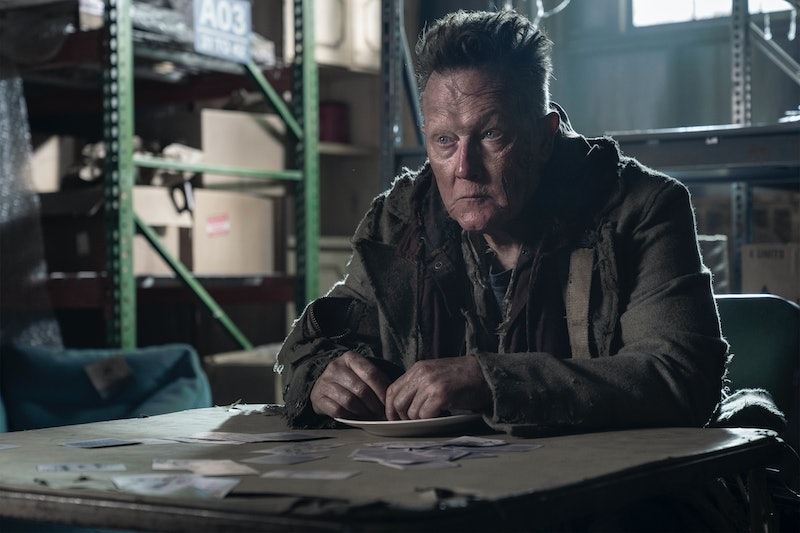 Spoilers ahead for The Walking Dead Season 10, Episode 19. On an otherwise fruitless supply run, Aaron and Gabriel get some surprise bonding time when they run into a boar (turned delicious dinner) in The Walking Dead Season 10, Episode 19. But when they decide to push their luck and scout for supplies “one more” time, their fun is interrupted by a mysterious man named Mays (Robert Patrick) who puts them through a twisted game of Russian roulette.

Though Mays winds up dead by the end of the episode (thanks to a sudden, ruthless bludgeoning by Gabriel), his presence is sure to linger over the survivors. Not only did he push each character to their emotional limits, forcing them to reckon with what they would do (or not do) for each other and their loved ones, but it’s possible he’s connected to a greater threat, like the recently introduced Reapers.

Just like the Reaper we met in Season 10C’s premiere episode, “Home Sweet Home,” Mays displayed some seriously violent behavior. He was heavily armed and dressed in bulky, camo-like gear not much different from the guy who blew himself up in front of Maggie and crew. We also met Mays’ brother at the very end of the episode. And just like that first Reaper, he chose to die rather than be taken in by the survivors.

Another possible tie between Mays and the Reapers are the religious motifs that appeared in the episode. Aaron and Gabriel had an insightful conversation about priesthood the night before Mays attacked, and later Mays told Gabriel that he uses the Bible as toilet paper and doesn’t believe there are good people in the world anymore. Viewers might remember that the Reaper from two episodes ago told Maggie, “Pope marked you” before blowing himself up. So even though the exact religious views of the Reapers are unclear (is theirs a hybrid, apocalyptic amalgamation of spiritual beliefs that upholds violence and vengeance above all?), the fact that religious topics are popping up could point toward some kind of connection.

If Mays does turn out to be a Reaper, it’s possible that the entirety of Season 10C is working up to a major conflict with the mysterious group. Several fans already think Leah is a Reaper (or is at least connected to the group in some way), so we’ll see in the next few weeks how much of a problem the Reapers become.