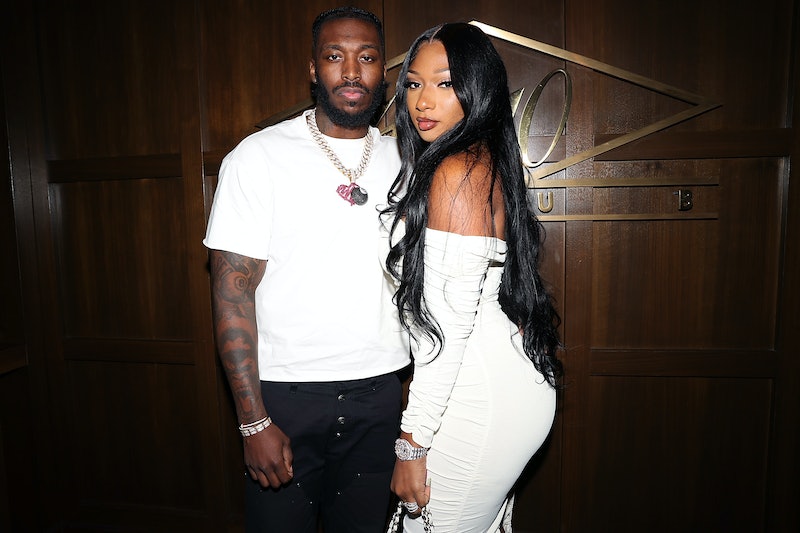 Megan Thee Stallion is having another hot girl year. In March, the rapper took home three trophies at the 2021 Grammys in the Best New Artist, Best Rap Song, and Best Rap Performance categories. More recently, she earned a whopping six nominations at the 2021 MTV Video Music Awards, including Video of the Year for “WAP.” However, Megan knows that there’s more to life than winning awards and selling records — like dating, for example. In February, Megan confirmed her relationship with fellow rapper Pardison Fontaine during an Instagram Live. And now, the happy couple is celebrating their first anniversary.

On Monday, Oct. 18, the 26-year-old artist shared a carousel of photos with her boyfriend on Instagram. In one shot, Fontaine is drinking out of a glass that Megan is holding up with her behind; in another, she’s jumping on his back outside of a private jet. The slideshow also includes a variety of mirror selfies and pictures of the couple dressed up for high-profile events. “1year of fun with you,” Megan captioned the post alongside an orange heart emoji.

Fontaine also paid homage to the first year of their relationship in a video set to the tune of John Legend’s “All of Me.” “I love you because, you know, your presence is a gift all in itself,” the 31-year-old musician says as photos and videos of the couple flash across the screen. In one clip, Megan shouts lyrics into her boyfriend’s face; in another, less glamorous video, she brushes her teeth. “This is how she got me right here,” he jokes. “I seen her brush her teeth one time.” By the end of the tribute, Fontaine admits that he loves Megan before the words “forever to go” appear on the screen.

The pair’s first anniversary comes just a few months after they made their red carpet debut. In May, Meg cozied up to her man while posing for photos at the iHeartRadio Music Awards. The love birds showed up to the event in matching outfits, proving that they were going strong after several months together. Fontaine attended the event to show support for his girlfriend, who won Best Collaboration for “Savage” featuring Beyoncé. Then, in June, he was by her side at the BET Awards, where Megan went on to win several awards, including Best Female Hip Hop Artist.

It’s important to note that in this relationship, the support goes both ways. When Megan first revealed that she and Fontaine were dating in February, the “WAP” rapper was actually defending him from online haters. “I don’t be liking some of the stuff on the internet,” she said during the livestream. “I didn’t like what they was trying to say about Pardi ’cause he is so calm and so sweet. ... That’s my boo, and I really like him.”

Megan went on to further confirm the romance. “Y’all not about to play with my man,” she told viewers. “He don’t even be doing nothing to nobody. Yeah, he my boyfriend.” The “Body” rapper’s announcement came only a few weeks after she hinted at being in a relationship on Twitter. “I’m healthy, I can take care of myself, my friends & family love me , my boo love me,” she tweeted on Feb. 15.

Fontaine, whose most recent album, Under8d, was released in 2019, also recently shared a glimpse at the couple’s Valentine’s Day celebrations on Instagram. The rapper posted photos of the flowers he bought, the dinner menu titled, “Pardi With a Hottie,” and what appears to be a getaway in a private jet. He captioned the post, “SOME TIMES YOU JUST GOTTA DO THE MOST.”

In July, Fontaine shared a sweet glimpse at the couple’s playful relationship — posting a full-on water balloon fight between the pair on Instagram.

In the past, Megan has largely kept her love life out of interviews, preferring instead to focus on her career, her health, and empowering other women through her work and activism. Her reluctance to go public with any kind of romance makes sense; in a February 2020 interview with Rolling Stone, she shared that she doesn’t like seeing all of the dating rumors in the press. “These are my immediate girlfriends, and we all have a lot of guy friends,” she said, adding that whenever she hangs out with someone, people assume they’re hooking up. “Why can’t I just be turnt up with my friend tonight?” she asked.

The rapper hasn’t kept all of her past relationships private, though. In July 2019, she made her romance with “All Dat” collaborator MoneyBagg Yo Instagram official, sharing photos of them and jumping on Instagram Live together. However, the two appeared to part ways shortly thereafter. In January, Moneybagg Yo confirmed that the split was mutual during an appearance on the podcast Rap Life Radio With Ebro Darden, saying it just “didn’t work,” but that he wishes her well.

Meanwhile, her career has continued to grow, with Megan becoming a major breakout artist in 2020. She was featured on Cardi B’s “WAP,” which came out in August 2020 and debuted at No. 1 on the Billboard Hot 100 charts. “WAP” was the second No. 1 song for Megan after “Savage” topped the charts in May. On Nov. 20, she released her debut album, Good News, along with a star-studded music video for her single “Body.” Megan has also won numerous awards, including a BET Award for Album of the Year, a Powerhouse Award at the Billboard Women in Music Awards, and two MTV VMAs — Best Hip Hop Video for “Savage” and the Power Anthem Award for “Hot Girl Summer.”

This article was originally published on Aug. 30, 2020