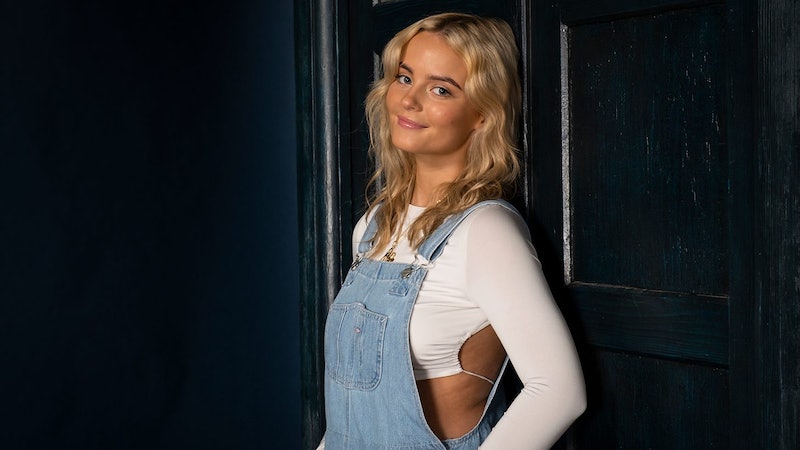 Ever since Ncuti Gatwa was revealed as the Fifteenth Doctor earlier this year, Whovians have been waiting with baited breath for the Doctor’s companion to also be unveiled. Following in the footsteps of Billie Piper, Catherine Tate, Freema Agyeman, and Mandip Gill, 18-year-old actor Millie Gibson joins the Doctor Who cast as Ruby Sunday. “I can’t believe it myself,” the Coronation Street star admitted during Children In Need, adding that she’s glad she no longer has to keep it all secret. “It’s insane. I mean, I’m so honoured that I was even considered for an audition... I just hope I can make you all happy, and, like, fill the boots of the other companions.” With the spotlight firmly on the young actor, what else do we know about Millie Gibson?

Hailing from Oldham, Manchester, Gibson was spotted by a local talent agency in a drama class at Oldham Theatre Workshop at a very young age and has been in the acting world ever since. Best known for playing Kelly Neelan in Coronation Street, Gibson started out acting on CBBC playing Indira in the series, Jamie Johnson, and went on to appear in other dramas such as Butterfly and Love, Lies, And Records. She joined the Coronation Street cast in 2019 and her performance as Kelly earned her the Best Young Performer award at The British Soap Awards in 2022. In August 2022, the actor revealed she would be leaving the soap, with the Doctor Who announcement now making a lot more sense for her Corrie departure.

Over on Instagram (@milliegibbo), Gibson shared her joy of her new Doctor Who role to her 190,000 followers and also regularly posts her fave outfit looks, holidays, and nights out with pals. The young actor is also a big fan of TikTok (@milliegibbo3) with her funny and wholesome videos regularly being watched by millions.

On Gibson’s latest role, Doctor Who showrunner Russell T Davies said, “It's the great honour of my job to find the next generation of talent, and Millie shines like a star already.” He added that the actor is “brilliant, dynamic, clever and a wonderful actor. As a Coronation Street fan, I've seen Millie survive chases, guns and sieges, but that's nothing compared to what lies ahead for Ruby Sunday.”

More like this
Turns Out George Clooney Is A Huge Fan Of This Classic British Game Show
By El Hunt
Michaela Coel Has Some *Thoughts* About The Nepo Baby Discourse
By Maxine Harrison
Everything To Know About The 'Daisy Jones & The Six' TV Series
By Maxine Harrison and Brad Witter
Twitter Is Burning As Phoebe Dynevor Reveals Daphne’s 'Bridgerton' Exit
By Sophie McEvoy
Get The Very Best Of Bustle/UK
Sign up for Bustle UK's twice-weekly newsletter, featuring the latest must-watch TV, moving personal stories, and expert advice on the hottest viral buys.