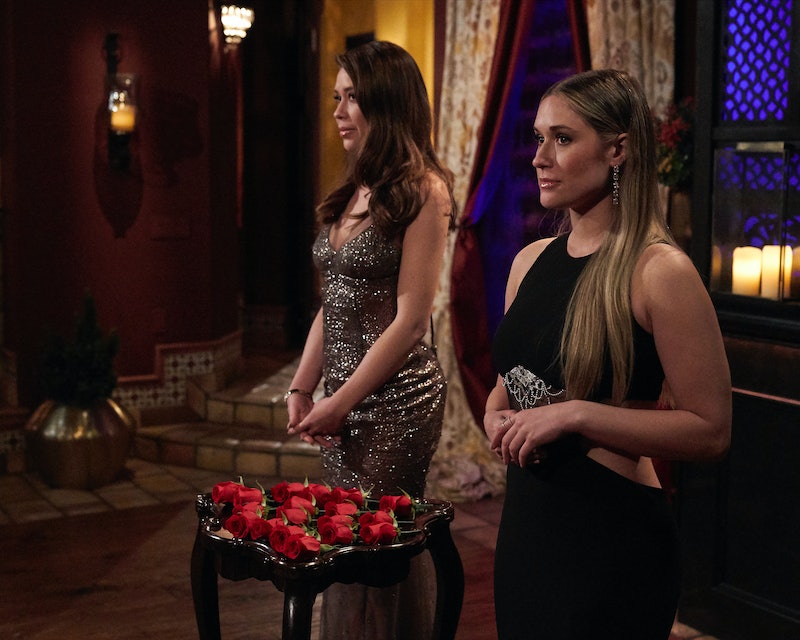 Bachelorettes Gabby Windey and Rachel Recchia sent their first few men home on the second episode of The Bachelorette — including Chris, who riled up the entire Bachelor Nation Twitter when he started talking about Fantasy Suites.

After the group date involving stripping down to Speedos, Chris, a mentality coach from California, brought up the Fantasy Suites in conversation with some of the guys. He said that if Gabby or Rachel ended up sleeping with other contestants, he would leave. “For me, it'd be a dealbreaker if we got down to the Final Four, which I plan to be in, and if we go in the Fantasy Suite and we have this sexual experience, and then the person who I'm most interested in decides that she's going to have sex with multiple people and feel it out,” he said. The rest of the guys found it disrespectful and Nate called Chris out for what he said — to no end.

Unsatisfied with the lack of resolution or apology, Quincy, Jordan, and Hayden pulled Rachel aside right before the Rose Ceremony to let her know what had happened with Chris. Rachel was rattled by the information. “So people are talking about Fantasy Suites,” Rachel said. “I don’t even know why sex is being brought up.” The former Bachelor contestant alluded to her time on Clayton Echard’s season and the twisty controversy that led to heartbreak when both her and Gabby found out he had slept with other contestants. Rachel added that she didn’t want to be seen as someone who was taken to Fantasy Suites and “sexualized” — especially before even having a conversation with someone.

Gabby reacted the same way when Rachel told her what had happened. “I’ve never even had a conversation with Chris,” Gabby said. “It seems very controlling and I think it’s disrespectful of our journey and our process.”

Together, the women pulled Chris aside and that didn’t go so well. “Do you feel like it’s appropriate to be talking about Fantasy Suites this early?” Gabby confronted him. “I think it’s an appropriate thought,” he responded, later saying, “I’m not taking away anybody else’s reaction and that’s not something I want to do to a female.”

Gabby was quick to point out that they’ve only been on the show for four days. “Your very calculated thoughts about Fantasy Suites are very inappropriate at this time,” she told him. “If you’ve seen our journey, you’d respect our place as women.” Rachel quickly added that instead of taking the “opportunity to apologize,” Chris was still talking to them in “a condescending way.” At that point, Gabby asked him to leave — a decision Rachel seconded. They even escorted him out.

He didn’t take kindly to being sent home though and minutes later, he stormed back into the house to confront some of the men, asking them which one ratted him out. When the women saw the commotion, Rachel immediately called him out saying, “Can we interrupt you guys? We did ask you to leave.” She said in a confessional after, “I don’t know if it’s because Gabby and I are women, but it’s our decision.”

“That was so condescending,” Rachel told Gabby as they watched him leave, before commending her co-star. “You handled that beautifully.”

While the ladies seemed to move on from the situation and even continued to their first-ever Rose Ceremony, the Internet found the entire confrontation super awkward.

Bachelor Nation was satisfied with the confrontation though, wanting more of Gabby and Rachel going in on Chris.

Audiences already didn’t love his group date performance to begin with when he adlibbed a song.

But even more were immediately turned off after his presumptuous comments about making it to the Fantasy Suites, finding them a tad premature. One user tweeted, “I’m sorry did he just say FANTASY SUITES?! Homie it’s like day two.”

Some even caught the tinge of toxic masculinity in the language that was used. “When a man calls a woman ‘the female,’” user @adultingiguess wrote, noticing that Chris used the term “female” several times. Even former Bachelor host Kaitlyn Bristowe called Chris a red flag.

More like this
Bachelorette Gabby Kissed Her New Fiancé On 'Dancing With The Stars'
By Jake Viswanath
Here's Exactly When Rachel & Tino's Fight Happened After 'The Bachelorette'
By Grace Wehniainen
Where Is Former Bachelor Host Chris Harrison Now & What Is His Net Worth?
By Hugh McIntyre
Here's What Happened After Rachel & Aven Left The 'After The Final Rose' Stage
By Grace Wehniainen
Get Even More From Bustle — Sign Up For The Newsletter