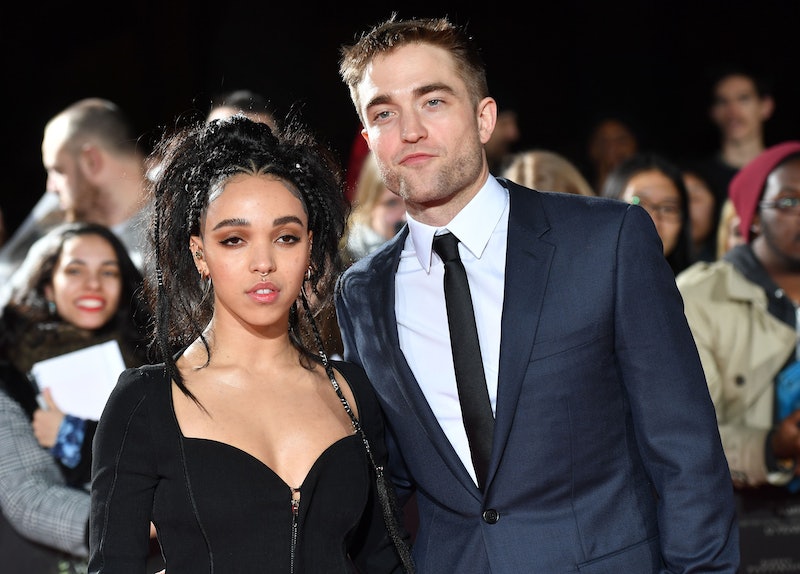 Yet another celeb couple has called it quits in 2017. According to multiple reports, Robert Pattinson and FKA Twigs have broken up after being together for almost three years. The Sun first reported that the pair ended their engagement on Oct. 11 and other reports that the couple are over have now followed. Bustle reached out to a manager for Pattinson for comment, but didn't not receive a response at the time of publication; a rep for Twigs had no comment.

The two reportedly met through a mutual friend in 2014 and got engaged shortly after in April 2015, according to E! News. But, things reportedly weren't going smoothly in the couple's relationship for some time. A source told JustJared that Pattinson and Twigs (who's real name is Tahliah Barnett) split up "several months ago". According to E! News, the couple both had busy travel schedules and that partly led to the split. The source said, "Their travel schedules took a big toll on the relationship. Robert is the one who ended it." The source also said that the couple had previously taken another relationship milestone when the two bought a house together: "They bought a house together but then it was just not working out between them." The source said that Twigs was the one to move out of the couple's shared pad.

Unfortunately, it seemed like the writing was on the wall in terms of their breakup. The couple hadn't been see out together since May 2017 during the Cannes Film Festival. It's not like Pattinson's been shying away from the spotlight either. He's been busy recently promoting his new movie Good Time, yet his fiancée hasn't been seen by his side. In one of his most recent appearances Pattinson went solo during the NYC premiere of Good Time.

The couple was also plagued with rumors about a possible split before it even happened. In August 2017, it seemed like Pattinson and Twigs had broken up. She was seen out and about with model Brieuc Breitenstein in Ibiza. In turn, Pattinson was seen out with Katy Perry and rumors circulated that the two were an item. (However, Pattinson and Perry have been friends for years, according to E! News.) The couple wasn't immune to other breakup rumors as it was also said that the couple split in July 2016 and in October 2015, although those reports were never substantiated.

More like this
Everything To Remember About Lace Morris Before 'Bachelor In Paradise' Season 8
By Grace Wehniainen
Dixie D’Amelio & Noah Beck “Love Each Other” Despite Breakup Rumors
By Julia Emmanuele, Jordyn Tilchen and Grace Wehniainen
Hailey Bieber Just Responded To *That* Viral Met Gala Moment
By Radhika Menon and Sam Ramsden
Khloé Kardashian Is Reportedly Dating A Private Equity Investor She Met Through Kim
By Jordyn Tilchen and Jake Viswanath
Get Even More From Bustle — Sign Up For The Newsletter

This article was originally published on Oct. 17, 2017