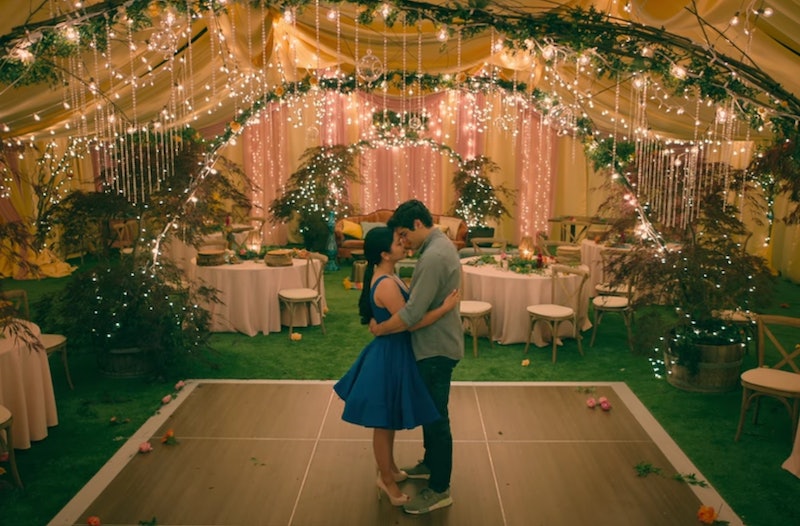 To All the Boys I’ve Loved Before is a franchise rooted in grand gestures. Be it Lara Jean (Lana Condor) sprinting to the lacrosse field to profess her feelings to Peter (Noah Centineo) or the two going on a perfect first date as a couple and ending it by releasing a paper lantern into the sky with their initials on it. Not to mention Peter showing up in the last moments of the second film to sweep Lara Jean off her feet in the snow.

Lara Jean is a true romantic, and To All The Boys isn't afraid to celebrate it. “Lara Jean leads with love every day, and she doesn’t know anything else,” Condor tells Bustle. “That’s one of my favorite parts of her: She’s in love with love.” While romantic female protagonists are a dime a dozen in pop culture, what's always made the series an anomaly is that Peter reciprocates Lara Jean’s overtures with equally romantic ones of his own. The series is refreshingly devoid of the typical mocking or ridicule often reserved for women who unabashedly and unfailingly believe in love. In a world where toxic masculinity appears at every turn, watching a seemingly one-dimensional lacrosse bro like Peter turn out to be a not-so-secret romantic who respects the woman he loves is still a thrilling fantasy. (Warning: Light spoilers for the To All The Boys trilogy ahead.)

But where To All the Boys: Always and Forever shines especially bright compared to its predecessors is in its emphasis on how the pair showcases their love in the quiet, more intimate moments. “One of the most beautiful parts of Lara Jean and Peter’s relationship, and it’s similar to how Noah and I interact in our friendship, is that they can sit together in silence and it not be uncomfortable,” Condor says. “I think that’s a testament to true friendship and true love: You can sit with someone and not need to fill the space with noise and chatter.”

"One of the most beautiful parts of Lara Jean and Peter’s relationship... is that they can sit together in silence and it not be uncomfortable."

Condor’s favorite moment from the film perfectly encapsulates the understated side of their love: It's when Lara Jean and Peter stay up past their curfew time watching a movie and accidentally drift off. “Did you know that you smile when you’re sleeping?” Peter asks Lara Jean when she wakes up. It’s not a scene that would necessarily stand out as a Big Relationship Moment, but it showcases the warm familiarity that can only exist between two people — both the characters and the actors playing them — who know each other so well.

But the film’s grandest gesture by far is Peter Kavinsky’s new “contract,” for the pair (a throwback to the first film) that he writes in Lara Jean’s yearbook: that he promises to love her always and forever. Shortly thereafter, the two finally have sex for the first time. But unlike many teen films, the sex (and particularly losing one's virginity) is not a major plot point. It’s short, sweet, and intimate. There are no rose petals or candles or sexy shots; it’s just two people who care deeply for one another and are mature enough to just let that love breathe. Because the most over-the-top romantic thing Peter and Lara Jean can do for one another is just truly love each other, no grand gestures necessary.

More like this
Lindsay Lohan & Jonathan Bennett Celebrated Mean Girls Day Very Differently
By Jake Viswanath
What’s New On Netflix: Ana De Armas’ 'Blonde' & A Nick Kroll Special
By Arya Roshanian
Here’s Everything Coming To & Leaving Netflix In October
By Jake Viswanath
Everything To Know About The Long-Awaited ‘Community’ Movie
By Stephanie Topacio Long
Get Even More From Bustle — Sign Up For The Newsletter