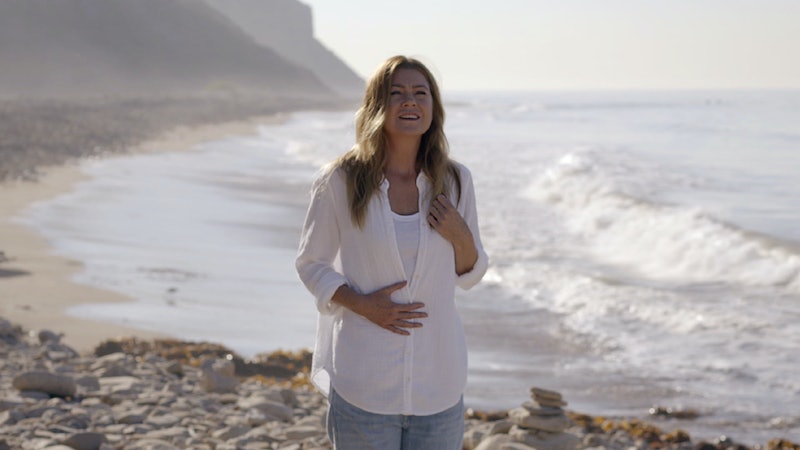 Spoilers ahead for the Grey's Anatomy Season 17 midseason premiere.

OK, wow. It’s going to take some time to recover from that surprisingly heartbreaking midseason premiere in which Andrew DeLuca died via a stab wound — the first major character death in a while at Grey Sloan Memorial. There’s a lot to digest about his death, how it will affect the hospital, and what the implications are for Meredith back on the beach. (In a trailer for next week’s episode, she sees Derek again.) Fortunately, showrunner Krista Vernoff is trying to help viewers make sense of it all and tweeted after the episode that despite the death of Giacomo Gianniotti’s character, we “will see him again. As actor and as director.”

Her initial reassurance was a bit vague regarding how exactly we’ll see the definitely-dead DeLuca again. But in an interview with Deadline, Vernoff offered more clarity. Spoiler Alert: He’s not coming back to the beach. But in a season in which Meredith’s dreamy death beach has served as a catch-all for long-gone favorites, the fact that he’s not reappearing there is certainly interesting.

“There was some discussion of bringing him back to the beach, but we all felt like his exit with his mom was so profound and so powerful,” Vernoff explained. “I cried harder watching that than I’ve cried watching anything on our show in years, and so, we didn’t want to see him come back to the beach. You will see him again. He does appear in more episodes this season, but I don’t want to spoil what those are.”

In a season so defined by uncertainty (neither Vernoff nor Ellen Pompeo knows if this will be the show’s last), Vernoff said DeLuca’s death was “the most vivid story” she had when approaching this season. The showrunner and Gianniotti both talked to The Hollywood Reporter for a March 11 report, and they were proud that DeLuca’s death was a heroic one and that “he'd been through a mental health crisis and he'd come through it.” Gianniotti echoed the idea, saying that “it was an honor and privilege to tell that story.” For now, he offered some theories as to what his departure could mean for Mer down the line.

“It's tough to say because you think of the dream and what happened at the end of the episode and wonder if Meredith would correlate that with the metaphor,” he wondered. He continued, “Maybe that would translate to her waking up? Who knows? Or it will be a massive surprise when she wakes up.” Perhaps we will see sweet flashback moments of Meredith and DeLuca in simpler times as they, unfortunately, didn’t get to say goodbye because Meredith was unconscious when he flatlined in surgery.

And as Vernoff mentioned, Gianniotti will direct at least one upcoming episode: “Sorry Doesn’t Always Make It Right.” He previously teased this on Instagram, writing that he was “living out my dreams, doing what I love every day.” So at least we can find solace in the fact that Gianniotti is happy and still an essential part of Grey’s. Based on the snippet Gianniotti shared, his directing debut will happen two episodes from now.

More like this
A New 'And Just Like That' Table Read Pic Confirms A Key Character's Return
By Jack Irvin and Grace Wehniainen
Nicola Coughlan Shared A Lady Whistledown Excerpt From ‘Bridgerton’ Season 3
By Grace Wehniainen, Alyssa Lapid and Sam Ramsden
Everything To Know About 'RHONJ' Season 13
By Brad Witter and Jake Viswanath
You’ll Definitely Recognise Both Of Ty Tennant’s Parents
By Maxine Harrison
Get Even More From Bustle — Sign Up For The Newsletter