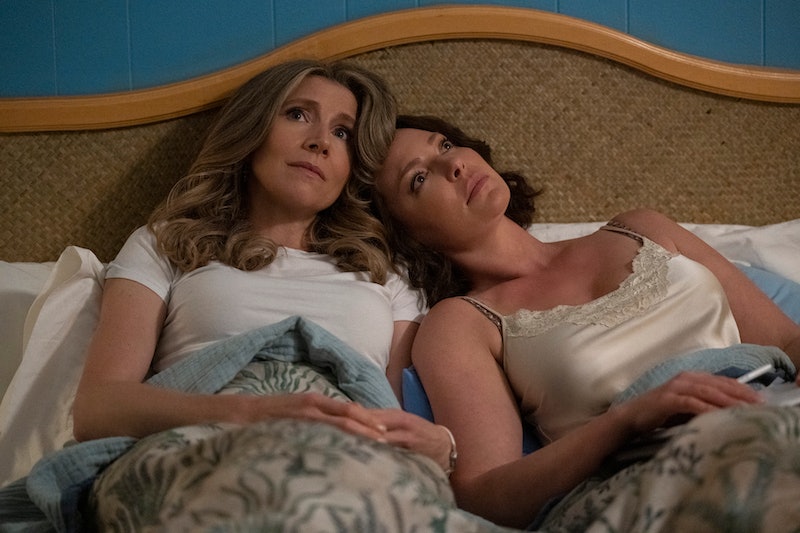 Spoilers for Firefly Lane, including possible spoilers for the Netflix series' second season, follow. Has that cliffhanger ending got you itching to know whether Firefly Lane will return for Season 2? Fans of Netflix’s hit series are in luck because a second season is on the way — and soon. Firefly Lane’s main stars, Katherine Heigl and Sarah Chalke, first announced the show’s return in a Zoom video last year and answered some questions from fans. (For instance, Chalke confirms that the “issue between Tully and Kate ... is family-related and has nothing to do with Johnny,” in case you were wondering.)

Chalke and Heigl did not reveal a release date or trailer at the time — but more than a year later, we finally have some answers. On Oct. 4, Netflix announced the details of Firefly Lane Season 2. Sadly, the show will be ending with the next installment, but there’s a positive twist. Firefly Lane Season 2 will have 16 episodes releasing in two parts, à la Stranger Things Season 4.

Clocking in at nearly 500 pages, Kristin Hannah's 2008 novel, Firefly Lane, centers on Tully Hart and Kate Mularkey: two junior-high-schoolers who fall quickly into kinship over the course of one fateful summer. Beginning with the girls' 1974 meet-cute — after which point they become known as "TullyandKate" — Firefly Lane spools out the next 30 years of their lives, watching their friendship end when one of them publicly humiliates the other, as well as their eventual reconciliation.

The Netflix series finale only hints at why Tully and Kate's long friendship comes to an end, but fans of Hannah's novel have some idea of what to expect from the much-anticipated Firefly Lane Season 2. It's worthwhile to note, however, that the Netflix series has already deviated from the novel's events in a few major ways, so Tully and Kate's story might change in the transition from page to screen. Here's how it all goes down in the book — plus, everything we know about Season 2:

After a 30-year-long friendship, Tully and Kate have a major falling out when Tully embarrasses Kate, live on national television. Fearing that Kate's fraying bond with her 14-year-old daughter, Marah, is on the verge of self-destruction, Tully invites them to appear on her talk show to talk about their relationship. When they accept, Tully pulls a switcheroo and changes the subject of Kate and Marah's segment to: "overprotective mothers and the teenage daughters who hate them."

It's a betrayal Kate cannot forgive. She ends their friendship right then and there, and the two women don't speak again for several years. Unfortunately, by the time they make amends, one of them is on her deathbed. We won't spoil the Firefly Lane book ending for you here, but expect some of this to play out in Season 2 with Heigl and Chalke returning.

What else can you expect from the show? According to the official Netflix synopsis:

Kate grapples with the painful aftermath of Johnny's ill-fated trip to Iraq, while Tully faces a lawsuit after walking away from her talk show, and must start her career over from the bottom. This leads her to search for answers about who she is and where she comes from -- including a quest to find the father she never met, against the wishes of her secretive hippie mother, Cloud. In the '80s, we see Kate and Johnny first fall in love, creating more than a little drama in the newsroom where they work, as Tully's career rises and she spars (and flirts!) with cocky sportscaster Danny Diaz. She just might have met her match — that is, if they can stop arguing for five minutes. While in the '70s, teenage Kate and Tully struggle to keep their friendship together as Cloud goes to jail for dealing drugs and Tully goes to live with her grandmother, far away from Firefly Lane.

The Firefly Lane Season 2 release date was announced on Oct. 4 — at least, the release date for Part 1 of the show’s final season. The first nine episodes will start streaming on Dec. 2, and the rest will follow in 2023.

There’s no Firefly Lane Season 2 trailer yet, but Netflix did release several photos from the upcoming installment.

This post will be updated with the trailer and additional plot and cast details as more information on Firefly Lane Season 2 becomes available. Netflix's Firefly Lane is streaming now.

More like this
The 'Firefly Lane' Book Ending Teases Way More Tears To Come In 2023
By K.W. Colyard
'Bridgerton' S3 Teases Exciting Social Season For Penelope Featherington
By Bustle
The 'Ginny & Georgia' Season 2 Release Date Is Only A Few Weeks Away
By Martha Sorren
The First Trailer For 'That '90s Show' Includes So Many Nods To The Original Series
By Jack Irvin, Alyssa Lapid and Grace Wehniainen
Get Even More From Bustle — Sign Up For The Newsletter

This article was originally published on Feb. 7, 2021