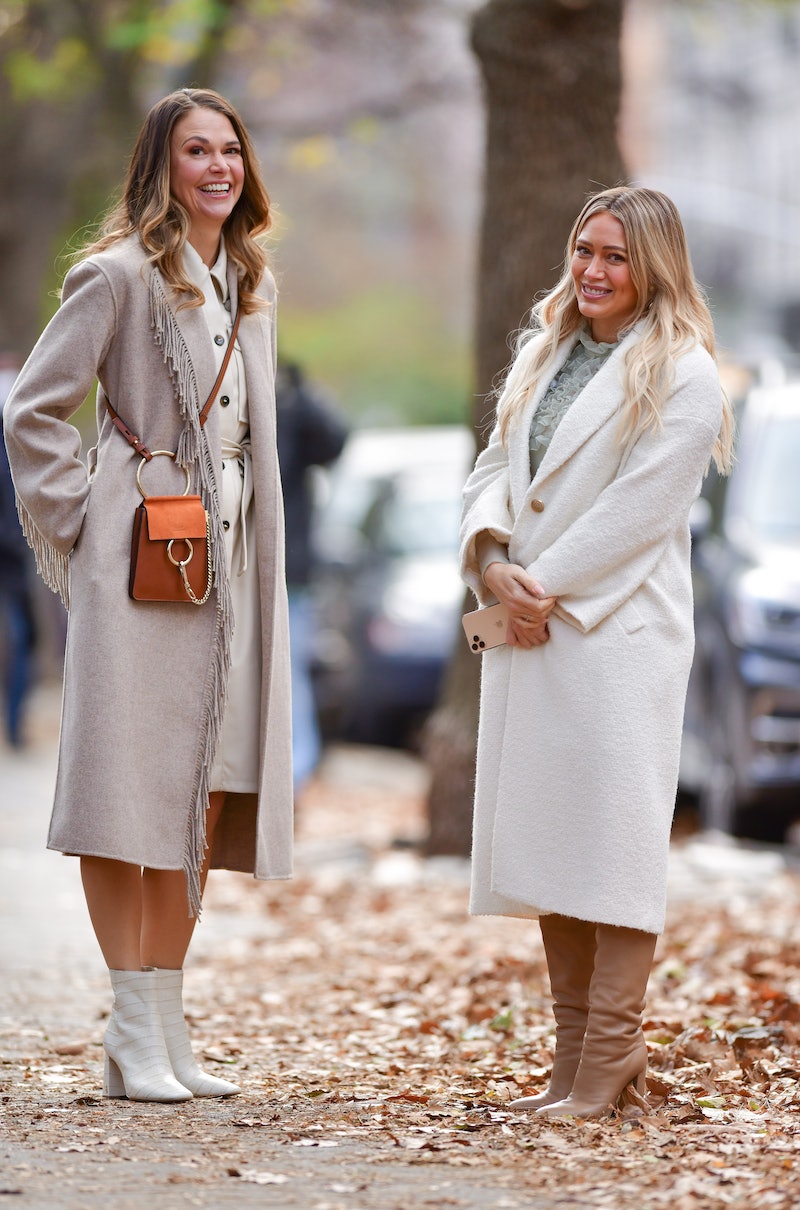 Get ready to dip a stiletto-ed foot back into New York City’s publishing scene one last time. The seventh and final season of Younger has a premiere date and fresh look at what’s to come for Liza and co. Sutton Foster is returning as Liza Miller, a 40-something woman who tells a white lie about her age in order to get a gig at Empirical Press. For six years, fans have watched her dodge age-related questions and juggle between two relationships. Now, creator, executive producer, and writer Darren Star (Sex and the City, Emily in Paris) is ending Younger after several major season 6 cliffhangers.

The show’s seventh and final season emerges after the COVID-19 pandemic delayed New York City filming. According to The Hollywood Reporter, Younger was meant to shoot in early 2020 but didn’t wrap production until earlier this year. The first order of business now that filming is completed: clarifying Liza’s love triangle once and for all.

Ahead, everything we know about Younger Season 7, including which characters we’ll be seeing less of in the final episodes.

When is the seventh season of Younger coming out?

It was announced that the next season of Younger would premiere on Thursday, April 15. Four episodes of the season will be available to stream immediately, while the eight final episodes are set to drop on each of the following Thursdays. The seventh season will first air on Paramount+ (more on that later) and be available on TV Land, the show’s original home, later this year.

Who is returning for Younger Season 7?

“The only thing I can really say is the show picks up exactly where we left off. We start at Diana’s wedding,” Foster told StyleCaster in October 2020. As a quick refresher, Liza seemed to be on the brink of rekindling things with former flame Josh (Nico Tortorella) when she got a proposal from current boyfriend Charles (Peter Hermann). Meanwhile, Kelsey (Hilary Duff) is back as head of Millennial after contemplating a solo career, but her on-off boyfriend Zane (Charles Michael Davis) has been secretly recruited for Charles’ competing publishing house.

It goes without saying that Foster, Duff, Hermann, and Tortorella will return for the seventh season. However, Davis will only appear as a recurring character, as opposed to series regular, as reported by TVLine. Also returning to the show in a limited capacity is Miriam Shor as the statement necklace-wearing Diana Trout, according to the outlet. “Due to scheduling and COVID-related matters, Miriam Shor and Charles Michael Davis were unable to be season seven cast regulars,” Star told TVLine in a statement. “However, they will always be a much-loved and integral part of the Younger family and have added so much heart and soul to the series.”’

But fret not, Younger hive. Debi Mazar will reprise her role as the artistic Maggie Amato, while Molly Bernard is back as the scheming publicist Lauren Heller. Also returning for a few scenes? Bridgerton’s Phoebe Dynevor, who plays Clare, the mother of Josh’s baby.

Is there a trailer yet?

So far, viewers have three opportunities to see the Younger cast back in action, including a newly released trailer on March 30. On March 17, Paramount+ unveiled “Forever Younger,” a montage of the show’s greatest moments over the last six years and tease of what’s to come.

Prior to that, a sneak peek promised “one last rollercoaster ride” of a final season. Several quick clips were shown, including Kelsey and Liza screaming in a wine cellar and Josh wishing his ex nothing but happiness. “Accept the past, embrace the present, and keep moving forward,” Liza says at one point, previewing her character’s new life mantra.

Here’s an official synopsis of Younger Season 7, according to a press release:

“Liza Miller (Foster), a talented editor navigating the highly competitive world of publishing while juggling the complications of mixing business with pleasure, and facing the lie she created about her age to land her dream job. In the final season, Liza’s personal life is on shaky ground as she tries to stay true to herself. After a setback at work, Kelsey (Duff) doubts her career decisions and discovers a new creative outlet. Maggie (Mazar) gets cancelled.”

Finally, on March 30, the new Younger trailer provided some added clarity and context for the show’s last season and how it addresses the developments from Diana’s wedding.

Where can I watch the final season of Younger?

Younger’s final season will debut on a new home — Paramount+. The Viacom-owned streaming service (formerly CBS All Access) went through a rebrand and launched on March 4. Those wanting to try Paramount+ can get a 30-day free trial with subscription plans starting at $5.99 per month. All of the show’s previous seasons are available to binge-watch on the platform, too. Otherwise, all 12 episodes of Younger Season 7 will be available on TV Land later this year.

Wait, is this actually the last season?

It was reported in February 2021 that the seventh season of Younger would indeed be its last, but don’t pour one out for the series just yet. A Younger spinoff starring Duff’s Kelsey was announced last May. That’s music to the ears of fans missing both the OG show and the now-defunct Lizzie McGuire revival.

More like this
A New 'And Just Like That' Table Read Pic Confirms A Key Character's Return
By Jack Irvin and Grace Wehniainen
Nicola Coughlan Shared A Lady Whistledown Excerpt From ‘Bridgerton’ Season 3
By Grace Wehniainen, Alyssa Lapid and Sam Ramsden
Devi Is Going To Meet A “Smoldering Bad Boy” In ‘Never Have I Ever’ Season 4
By Jack Irvin and Gabrielle Bondi
Everything To Know About 'RHONJ' Season 13
By Brad Witter and Jake Viswanath
Get Even More From Bustle — Sign Up For The Newsletter

This article was originally published on March 17, 2021