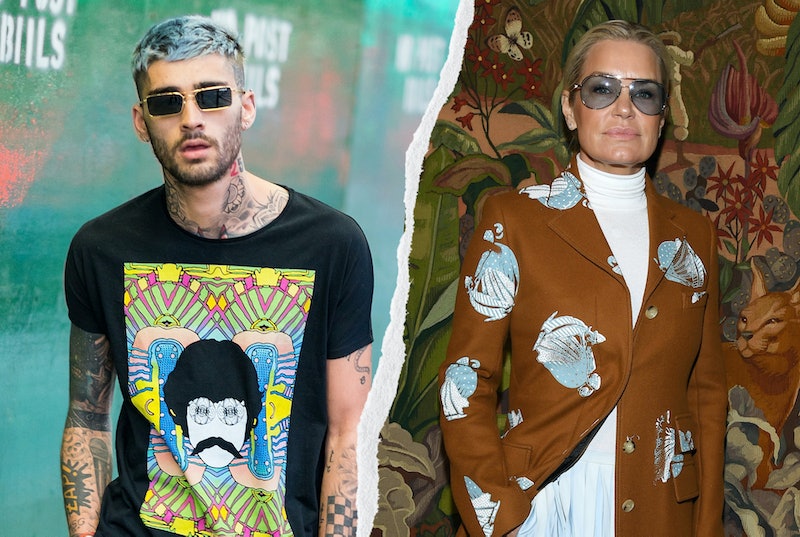 In the span of a day, singer Zayn Malik was accused of an act of physical violence against his partner’s mother, denied the allegation, and released his own statement about the incident.

Early on Thursday, Oct. 28, Gigi Hadid’s mother, Yolanda Hadid, reportedly accused the former One Direction star of striking her. According to TMZ, she claims the incident occurred last week and is considering pressing charges. Not long after those allegations were made public, Zayn attempted to simultaneously clear the air and keep things private.

In a statement given to TMZ mid-afternoon, Zayn said, "I adamantly deny striking Yolanda Hadid. And for the sake of my daughter, I decline to give any further details.” He continued, “I hope that Yolanda will reconsider her false allegations and move towards healing these family issues in private.” Bustle has reached out to representatives for both Zayn and Yolanda but had not heard back by the time of publication.

The R&B/pop musician took to Twitter shortly before going directly to TMZ to share a screenshotted note that demands privacy, primarily for his daughter, Khai, whom he shares with Gigi. The statement reads:

“As you all know I am a private person and I very much want to create a safe and private space for my daughter to grow up in. A place where private family matters aren’t thrown on the world stage for all to poke and pick apart. In an effort to protect that space for her, I agreed to not contest claims arising from an argument I had with a family member of my partner’s who entered our home while my partner was away several weeks ago. This was and still should be a private matter but it seems for now there is divisiveness and despite my efforts to restore us to a peaceful family environment that will allow for me to coparent my daughter in a manner in which she deserves, this has been ‘leaked’ to the press. I am hopeful though for healing for all involved with the hard words shared. More importantly I remain vigilant to protect Khai and give her the privacy she deserves.”

By Thursday evening, it was still not completely clear what happened between Zayn and Yolanda. At that point, Gigi’s rep had released a statement to E! News, saying, “Gigi is solely focused on the best for Khai. She asks for privacy during this time.” Not long after, People reported Zayn and Gigi officially broke up. The outlet cited multiple sources, including a Hadid family friend. “They are not together right now. They are both good parents, though,” the source said. “They co-parent. Yolanda is of course very protective of Gigi. She wants the best for her daughter and grandchild.”

Shortly after the breakup news circulated, more details about the family’s alleged altercation emerged. According to an Oct. 29 report from Page Six, Zayn pleaded no contest on Oct. 27 to four counts of harassment from an argument in September. The outlet cited court documents, alleging Zayn had called Yolanda a “f*cking Dutch slut” and demanded she “stay away from [his] f*cking daughter.” Zayn “also mentioned ‘the f*cking sperm that came out of [his] f*cking c*ck,’” Page Six continues, going on to reference documents that claim Zayn “‘grabbed and shoved [Yolanda] into a dresser, causing mental anguish and physical pain,’ though he denied making any physical contact.”

The report also alleged that Zayn yelled at Gigi, too: “Strap on some f*cking balls and defend your partner against your f*cking mother in my house,” he reportedly said, in addition to lashing out at a security guard who was present at the time. Finally, Page Six wrote, Zayn “was fined and ordered to 90 days of probation for each count for a total of 360 days.” He was also reportedly assigned an anger management class as well as a domestic violence supervision program. He can’t have contact with Yolanda or the guard he yelled at, either, per the report.

On Nov. 3, People magazine gave a status update, which reportedly came from a source close to the model. “Yolanda is very upset with Zayn, but Gigi has made it clear that her daughter needs her dad,” the insider revealed. “Gigi will do everything she can to make sure they co-parent in a civil way.” The source added that Yolanda is “very protective” of Gigi. “She wants the best for her daughter and grandchild,” they said. “She has had some issues with Zayn. He has a complicated personality, and she thinks he could treat Gigi better. It’s been hard at times for Gigi to live with him.”

Gigi and Zayn had been in an on-again, off-again relationship since 2015. During that time, they split at least twice, but they reconciled in very early 2020. The model later announced she was pregnant with the singer’s baby, and she gave birth to Khai in September 2020.

More like this
The Try Guys Cheating Scandal, Explained
By Grace Wehniainen
Confusion Reigns After Kanye Changes His Instagram Profile Pic To Kris Jenner
By Jake Viswanath
Kourtney Kardashian Claps Back At Pregnancy Speculation On Instagram
By Jake Viswanath
Adam Devine Hilariously Let Everyone Know He’s *Not* Accused Cheater Adam Levine
By Brad Witter
Get Even More From Bustle — Sign Up For The Newsletter

This article was originally published on Oct. 28, 2021