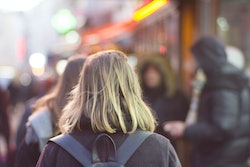 In theory, the brunch you’re at is going great — you’re surrounded by nice people, good food, hilarious conversation. But you’re still feeling alone, as though you’re a thousand miles away from everyone else emotionally. The tricky thing about feelings is that they're different for everyone: Some people, for example, are perfectly fine having few friends or enjoy spending a great deal of time alone. For other people, those same scenarios would create a deep sense of loneliness and isolation. Figuring out why you feel lonely even when you’re not alone can help you feel more in tune with the people around you — and with yourself.

“Being lonely is a feeling, whereas being alone is tangible and concrete,” says Sherese Ezelle, L.M.H.C., licensed behavioral therapist at One Medical. “When you feel alone you may feel disconnected from others although there are people that are available to you.” By contrast, feeling lonely when you’re around other people can be your body’s response to not getting your needs met, says Ezelle. “Sometimes sitting in a feeling of loneliness can illuminate things you would like to do to feel better.” Plus, being alone doesn’t necessarily mean feeling lonely — many people feel fulfilled by being alone. Loneliness is not mutually exclusive to being around others.

Loneliness has been on the rise in the United States since 2018, NPR reports. According to a survey released by health insurer Cigna in January 2020, three in five people in the U.S. feel lonely on a regular basis, especially folks who said they didn’t have close friendships that make them feel safe and loved. The events of the last couple of years largely made folks feel even more isolated, with 36% of Americans surveyed feeling lonely pretty much all the time, according to a study released in February 2021 by Harvard Graduate School of Education’s Making Caring Common Project. The same study also found that, while older people often feel more lonely, young adults have been the hardest hit by loneliness throughout lockdowns.

Richard Weissbourd, a psychologist and senior lecturer at the Harvard Graduate School of Education (HGSE) who helped lead the research, said: “I was surprised at the degree of loneliness among young people. If you look at other studies on the elderly, their rates of loneliness are high, but they don’t seem to be as high as they are for young people.” This could be due to many reasons–perhaps younger people are not used to these feelings or experienced sitting with loneliness, so the feelings have come as a shock. Young adults, according to Weissbourd, may be particularly susceptible as they transition from their “inherited families to their chosen families.”

As we transition back into being around people, the feelings of insecurity, loneliness, and anxiety that have percolated are likely to hang around. That’s all to say — if you’re thinking “Why do I feel so alone?” when you’re at a perfectly pleasant park hang, there are plenty of others in the same boat. And figuring out how to feel less lonely depends partly on why you feel lonely, to begin with. Check-in with yourself to see if any of these five reasons you feel alone resonate with you because the more you know about what’s going on when you’re lonesome, the more you can help yourself feel better.

You Feel Lonely Because You Crave Closeness

Relationship coach Kira Asatryn tells Bustle that loneliness is a complicated affair: it might actually mean you’re longing for connection, not just more people around you. "If my relationship with someone didn’t have that element of closeness, it tended to make me feel more isolated than just being alone,” she explains. In other words, if something in a friendship or romantic relationship isn’t clicking as you want it to, you might wind up feeling unfulfilled. “The desire to be relatable is what connects us to others and lessens our feelings of loneliness,” Ezelle says. It isn’t always enough to just be around someone if you aren’t connecting authentically. Try focusing on cultivating that closeness with others by setting intentional time to just be together — taking a walk with each other or going for coffee with no phones in sight. Still, it’s important to remember that even if you are open to developing good relationships, you can't expect everyone else to jump onto the same page with you, and not everyone will be open to delving into a closer bond — that’s why maintaining your existing friendships is so key.

You Feel Lonely Because You’re an Introvert

Introverts definitely can get a bad reputation for living in isolation, but that isn’t always the case. In reality, for a lot of introverts, too much socializing can simply be exhausting, especially with big groups of people, strangers, or environments where there's lots of networking. While it can be fun to catch up on a surface level, it doesn't necessarily make you feel closer to those around you. Introverts may need to charge their social battery before they can hang out, and after months of being alone, it might run out faster than ever. Make sure you’re recharging your social meter when you need to — choosing to stay in when you’re feeling down, for example — so that you’re not running your emotional battery low. That way, you might feel less lonely when surrounded by people, as you feel prepared to be around them.

You Need More Quality Relationships, Not A Higher Quantity Of Them

You can, theoretically, have a million friends, but if you don't invest time and energy into them, it's likely you'll continue feeling lonely. “We are given an opportunity to build trusting and lasting relationships when quality is the focus,” Ezelle says. “In order to truly feel connected to someone in a relationship you want to be able to be your most genuine self.” And, naturally, you probably can’t give your genuine self to a dozen people in the same way as you can to your two or three closest people — so try focusing on that squad to ensure those bonds are strong.

Of course, developing relationships is a two-way street: Becoming closer to a person doesn't mean you're dumping all of your problems on them, but that you're developing a connection and forming a bond that is mutually beneficial. Close friends can't solve your problems; they can only offer support. Furthermore, it's your job to support them when they need it, too.

You Feel Lonely Because You Have Your Guard Up

Ever feel like people don't really know you? It's possible that you're surrounded by people who are not emotionally available or who aren't looking for new friends or close relationships. It's also possible that you have your own guard up, and therefore aren't sending out clear messages that you're open for new bonds or connections. In a bigger group hang, it might be even harder to truly connect.

“Being genuine is one of the most important components of a healthy and sustainable relationship,” Ezelle tells Bustle. “When you have your guard up, you not only have challenges with authenticity, but you may also have challenges relating to what others may share with you.” Sharing yourself can be scary, but if you want to form a bond with others, it has to start somewhere.

No matter what narrative you’re trying to put up on your Instagram, Ezelle says that the desire to check your phone constantly often signals you want to check out of the present moment and into something else. In reality, we don't know what life is like for our peers behind the computer screen (unless we're actually, you know, there with them). Some studies also suggest that the lonelier a person is, the more time they're likely to spend on social media, thus contributing to the cycle. Social media can also give us the sense that we're with tons of other people, but because we're not gaining anything from face-to-face interaction, or actively experiencing their lives with them, it can further contribute to the sense that we're feeling isolated in a big group (even if that group is only virtual and perceived).

“More often than not you are looking at something from the past or wanting to take time addressing something in the future,” Ezelle explains. “In real-life social settings the importance of staying present shows the respect you are giving to the interaction you are having with others.” Plus, if you’re sitting at the dinner table on your phone, your present company might feel hurt that you’re checking out and struggle to connect with and include you. This will only exacerbate those feelings of loneliness.

If you’re feeling rusty in the in-person socializing department, Ezelle recommends deploying a few good active listening techniques. “Use physical non-verbal communication such as eye contact or nodding to show you are listening,” she suggests. Not sure what to say when it’s your turn? “Practice the use of reflective listening and asking open-ended questions to allow for further explanation and increased personal engagement.” The more you focus on that engagement, Ezelle says, the more you’ll be practicing the kind of openness that can help you make those connections you’re currently missing.

“Remember that you are the most important part of your relationship(s),” Ezelle adds, “and your ability to share your needs improves your personal connection with others.”

More like this
Why We Love Investigating Friendship Breakups
By Carolyn Steber
These 3 Signs Are Most Likely To Be In A Love Triangle — Here’s Why
By Kristine Fellizar
The 3 Zodiac Signs With Main Character Energy, According To An Astrologer
By Kristine Fellizar
How Ovulation Affects Your Sense Of Smell, Libido, & More
By JR Thorpe and Lexi Inks
Get Even More From Bustle — Sign Up For The Newsletter
From hair trends to relationship advice, our daily newsletter has everything you need to sound like a person who’s on TikTok, even if you aren’t.

This article was originally published on Feb. 12, 2016