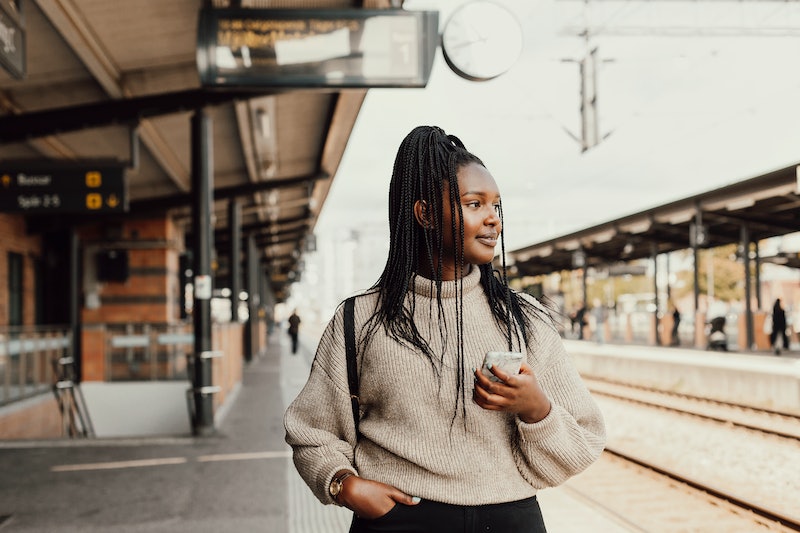 Seeing repetitive sequences of numbers while we go about our daily lives always feels a little uncanny or attention-grabbing. And if you constantly look at the clock at exactly 10:10 — or otherwise see the number 1010 — then you are probably wondering what the universe is trying to tell you. Also known as angel numbers, these oft-spotted numerical codes are thought to carry spiritual insights from the universe. If angel number 1010 is showing up frequently in your life, it’s helpful to break down the meaning of the number so you can make sense of its mystical message.

Some psychic mediums and spiritual healers believe the true meaning of angel numbers is channeled directly from angelic beings. However, the study of numerology can also be used to give meaning to the numbers that show up in our lives. In this ancient practice, each number has its own mystical symbolism and vibration. Numerologically, the number 10 is about universal truth, wholeness, and the great potential that lies within each individual. If you pick up on repeating sequences of the number 10, take it as a sign to trust in your ability to create limitless possibilities for yourself.

“Ten has always been the number of perfection — it combines the unity of 1 with the all-encompassing, never-ending zero,” master numerologist Josh Siegel tells Bustle. “The double manifestation [of] 1010 may symbolize that you were or are at a crossroads in which a powerful decision will be made to set you on your journey.”

Read on for more details on what it means if you’re seeing angel number 1010 on the regular.

The Meaning Of Angel Number 1010

The spiritual meaning of angel number 1010 can be more easily assessed by breaking it down into its core numbers, which are 1 and zero. Single-digit numbers comprise the foundation of numerology, and these two are particularly significant. “[Ten] holds the vibration of one, which is all about new beginnings, and that of zero, which is the infinite open space where miracles can literally generate out of thin air,” intuitive healer Laura Brown previously told Bustle. "When we work with this vibration, we essentially open our arms to all the juicy, wonderful, and divine goodies that we’ve long wanted." The independence and initiative of the number one blended with the infinite and universal potential of zero are what make 1010 a symbol of our limitless power. It relates to our ability to achieve whatever we dedicate our hearts, minds, and spirits toward.

This combination of energies also applies to the number 10, which is the repeating number sequence at the heart of angel number 1010’s meaning in numerology. Pythagoras — the ancient philosopher known as the founder of numerology — believed 10 to be a “perfect” number that symbolized the entire universe and everything within it. We are born with exactly 10 fingers and toes to count on, after all. So while nine in numerology is symbolic of completion, 10 is a vibration that carries us into a meaningful new cycle.

“In real practice, [seeing this number] symbolizes a major restart of life where one sets out to create a new future,” Siegel says. “It says to move forward with knowingness and faith of the 10 guiding you along your path — it’s time to be confident and believe in yourself.” The appearance of angel number 1010 may be a reminder that the future is in your own hands, and there’s no limit to the things you can create.

The meaning of angel number 1010 spiritually and numerologically is all about trusting in your power and the unlimited potential that the universe is offering you. Because it highlights individuality and initiatory abilities, seeing it often could be a reminder to maintain your sense of self-trust and not compromise your independence for a relationship. Focus your energy on becoming whole and empowered on your own before pouring yourself into someone else. "When you combine 10 [and] 10, what you have is double the luck and double the miracles,” Brown previously told Bustle. “The way in which these miracles enter our lives reminds us that we are not going through this journey alone." With 1010 energy on your side, trust that dedication to your own vision will naturally attract the right people into your life.

When it comes to love, seeing 1010 often may also indicate that it’s time to turn over a new leaf in your romantic life. Open your heart to relationships that encourage your highest potential rather than put a damper on it, and spend time with people who are in alignment with your greatest aspirations. Ultimately, seeing sequences of 10s is always a sign to come home to yourself and reconnect with your personal power source — but connecting with others who can inspire and encourage you can help you grow.

Anyone can connect with the numerological meaning of 1010 if it’s appearing to them frequently. That said, there are many different facets to the symbolism of this angel number, and thus there are different ways to interpret its presence in your consciousness. Here are a few things to consider if you notice it often.

According to Siegel, seeing 1010 can symbolize “a bit of an awakening that inspires you first, but then it’s all systems go.” So if 1010 is the angel number on your radar lately, then buckle up and brace yourself for a serious fresh start. As the first of the double-digit numbers, the all-knowing power of the number 10 represents the beginning of a new journey. Doubling that energy with 1010 could signify that you’re being ushered into a new chapter — so take charge of your future and grab the reins on the upcoming opportunities in your life.

Have Faith In Yourself & The Universe

Seeing angel number 1010 may be a reminder it’s time to stand tall in your confidence, embrace your independence, and level yourself up to ensure you’re ready for your life’s next big upgrade. "The symbolism of the number 10 is one of mastery, completion, and opening up to infinite possibilities," Brown previously told Bustle. "When we see things align so perfectly to provide us with exactly what we need or have wanted for ages, it’s impossible to see it as mere coincidence." Angel number 1010 may be showing up to pump up your personal sense of power — so if that’s your number, try to trust in your limitless potential.

As Always, Be Open To Your Own Interpretation

Digging into the numerology behind the number 10 gives us a helpful base for understanding the meaning of the angel number 1010. That said, there are no hard and fast rules when it comes to angel numbers. These mystical digits are fully open for unique interpretation, so if you have a personal connection with the number 1010, feel free to apply that to your delineation. Take note of how you feel, what you’re doing, or what’s on your mind when you see the number 1010 — as these observations can enhance the meaning that 1010 holds for you.