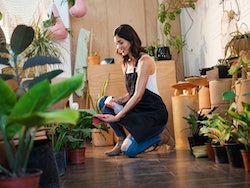 Around February 18 or 19 each year, the sun ingresses into the sign of Pisces after having spent 30 days in the sign of Aquarius. If you were born near the date of this solar transition, then it’s possible you think of yourself as an Aquarius-Pisces cusp sign, or identify with a combination of both Aquarius and Pisces traits. “Cusp signs” are generally considered to be an astrological myth — planets can only be in a single zodiac sign at a time, meaning that even if you were born during the last hour of Aquarius season, you’re still a full-blown Aquarius sun. However, it still makes sense that some people born near the Aquarius-Pisces cusp might feel like they embody the vibes of both signs.

Identifying with Aquarius-Pisces cusp traits can usually be chalked up to the fact that personal planets like Mercury and Venus stay within one or two signs from the sun as they move through the zodiac. This means that if you’re a Pisces, it’s likely that some of your significant planetary placements could fall into Aquarius, and vice versa. Having a lot of Aquarius and Pisces energy in your birth chart can easily manifest as having a blend of qualities from both signs.

Aquarius season marks the middle month of winter in the northern hemisphere, and its forward-thinking energy inspires us to reach out to our communities and look beyond the darkness of the present toward a more innovative and collaborative future. Once the sun ingresses into dreamy water sign Pisces, we’ve officially entered the final slice of winter, where spring is finally on the horizon. Pisces’ transcendental energy helps us emotionally process the internal growth we’ve experienced through the season and embrace the rebirth-oriented energy of spring. With each sign’s season following the next, the zodiac tells a story — so when we collectively hit the so-called Aquarius-Pisces cusp each year, we can all connect with that transitional energy.

Whether or not you were born on the cusp, you can still have a significant combination of Aquarius and Pisces zodiac energy present in your chart. Read on to learn more about the vibe of Aquarius-Pisces cusp traits.

Aquarius-Pisces Cusps Are Bursting With Creativity

What do you get when you blend an Aquarian’s visionary and inventive nature with Pisces’ dreamy and symbolic way of thinking about life? Someone who is bursting with a technicolor sense of creativity, that’s who! Aquarius is known for its endless stream of innovative ideas, while emotive Pisces has a talent for expressing feelings through artistic mediums. Together, this makes the Aquarius-Pisces cusp one of the most creatively inspired of them all.

Aquarius is the sign that rules community, so these natural humanitarians are always looking at the big picture and seeking solutions to collective issues. Meanwhile, idealistic Pisces are known for their boundless empathy — they truly feel that we’re “all one” and they can easily see themselves in others. Combined, the Aquarius-Pisces cusp is one that is truly dedicated to being altruistic and helping others.

Aquarius-Pisces Cusps Know How To Think Outside The Box

In modern astrology, Aquarius is ruled by Uranus, the unconventional planet of innovation and shocks. Sensitive Pisces, on the other hand, is ruled by Neptune — the illusive planet of dreams and intuition. The overlap of these two cosmic forces speaks to an otherworldly ability to step outside the confines of what’s considered “normal” and truly think outside the box. The spiritual influence of Neptune combined with the unpredictable ways of Uranus give Aquarius-Pisces cusp people a fresh and unusual perspective.

It’s easy to make friends as an Aquarius, as this collaborative air sign is highly social. Plus, they literally rule friendship in astrology, so being a significant part of a squad is basically their thing. Watery Pisces tend to be more solitary and introspective than their air sign siblings, but their near-psychic sensitivity and deep sense of compassion for others make them valuable friends, too — especially during an emotionally difficult time. This combination of energies makes people with Aquarius-Pisces traits extremely loving and intuitive friends who will always be there in a crisis to offer empathy, camaraderie, and a shoulder to cry on.

Aquarius-Pisces Cusps Have An Avant-Garde Sense Of Style

As the zodiac’s non-traditional rebel, Aquarians love to stand out from the crowd and make a controversial statement with their look. Creative Pisces, on the other hand, tend to be much more free-flowing about their aesthetic — their dreamy sense of style tends to blend their mood with their fantasies. That said, people with lots of Aquarius and Pisces energy in their chart might wind up with a cutting-edge sense of style. It’s part glamorous, part weird, but 100% unique to them.