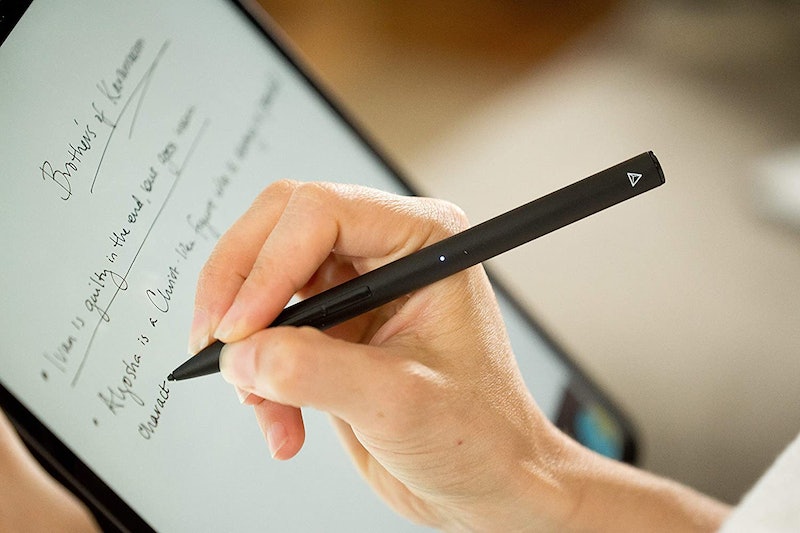 If you’re interested in a stylus for your Apple device and don’t already have a tablet with a stylus, there are numerous options beyond the Apple Pencil. The best Apple Pencil alternatives don’t just offer compatibility with your devices, but are also responsive, comfortable to hold, and designed to work well for the particular tasks for which you plan to use them. If you are looking for a stylus that’s as similar to an Apple Pencil as possible, you’ll want to keep an eye out for one that is pressure-sensitive (also known as active) and features a long (at least 10-hour) battery life, but there are many alternative styluses out there that can meet a variety of needs — and some are less than $10.

Pressure-sensitive styluses like the Apple Pencil use Bluetooth to communicate applied pressure, allowing you to create thicker lines or shading based on how firmly you press and angle the stylus on the screen while you’re writing or drawing on your tablet. These models often also offer a feature called palm rejection that lets you rest your hand on the screen without interference while you use the stylus. These are all good features, but they're not the only options.

Capacitive styluses are completely hardware-free and often resemble ink pens. Some even come with a cap and multiple physical tips to swap in and out, but note that 6 to 9 millimeter tips are best for general use iPads. These styluses are not digital devices, so you don’t have to worry about maintaining the battery (since there isn’t one). Most smart devices with touchscreens (including iPads) have capacitive touchscreens, which makes capacitive styluses compatible with most touchscreen devices. Capacitive varieties rely on pressure from the user, which means you might have to press harder than with a digital stylus to register touches, but that won’t change the thickness of what you draw or write. Ultimately, deciding between the two types of styluses could come down to personal preference, needs, and how much you want to spend.

While both types of styluses come in multiple shapes and sizes, they should always be easy to grip without being slippery or heavy. Thick crayon-style or triangular builds could feel more ergonomic for extended use, while thin, pen-like styluses with fine tips may feel more intuitive for sketching or note-taking on a tablet.

Whether you need it for doodling or list-making, for use with an iPad or iPad alternative, you’re sure to find an Apple Pencil alternative from this selection that’s perfect for you.

If you’re looking for a stylus with nearly all the same Apple Pencil technology, this Logitech pressure-sensitive stylus is one of the closest fits you can find. It’s compatible with iPads released in 2018 and later, supports palm rejection, and, like the Apple Pencil, it works well with apps such as Adobe Lightroom, Microsoft Excel, and Evernote. While the Logitech stylus does have tilt sensitivity like the Apple Pencil, it lacks pressure sensitivity, which makes it more of a general-use device than a super-accurate precision tool for illustrations. That said, it has a 4.5-star overall rating on Amazon after 4,000 and growing reviews, so most people seem to find it just fine for their uses. Several Amazon reviewers rave about the stylus' responsiveness, and one person even describes it as producing “effectively zero lag when writing on the screen.”

While the thick and flat silicone and aluminum design is more whimsical and a bit less sleek than the Apple Pencil, all the parts are replaceable (you can even use the Apple Pencil tip on this stylus), and it has a drop-proof rating from 4 feet off the ground. You can expect about 7.5 hours on a single charge — and in a pinch, 2 minutes of charging gives you 30 minutes of power.

Positive Amazon review: “This product is five stars all the way. I had an Apple Pencil and thought I wouldn’t find anything quite like it after my puppy ate it (yes, that happened). I couldn’t afford another one so I decide to go for this stylus since it had the best reviews. I work on procreate and. Sketches app on an iPad 12.9 — it is waaaay better than the Apple Pencil! I couldn’t believe it. It had amazing accuracy, no slip touch, no need to press when drawing, and just by tilting it, it adjusts thickness, like a real pencil. Awesome all the way. This one’s a keeper even though I’m a great Apple fan. No way am I changing back to Apple Pencil”

2. A Budget-Friendly Fan-Favorite Stylus For iPads

Savvy shoppers hoping to replicate the look and feel of the Apple Pencil without the price tag will find a happy alternative in this sleek stylus for iPads. With more than 68,000 reviews on Amazon and a 4.5-star rating overall, this fan-favorite delivers many of the same hallmarks of using the Apple Pencil (palm rejection and a long battery life of at least 20 hours) at a fraction of the price. Some Amazon reviewers who use this intermittently even report up to a week of battery longevity. The device supports iPads 2018 and later, excluding iPad Pro models, and offers automatic pairing just like the Apple Pencil.

The 1.5-millimeter tip is sensitive for very precise tasks, but it's worth noting that (unlike the Apple Pencil) this stylus does not offer pressure or tilt sensitivity and will not create thicker lines if you press harder or shade when held at an angle. Amazon reviewers still report great accuracy with tasks like writing and drawing diagrams, as well as a smooth user experience with virtually no lag. The stylus comes with two replacement tips, a USB charging cable, and a tip cover for protection when not in use.

Positive Amazon review: “I bought one of these to replace my Apple Pencil which would no longer take a charge. As this one costs less than a third as much as the Apple, I frankly did not expect much. But I was pleasantly surprised that it performs as well as the Apple, is very well made, is easier to charge, and does not have the stupid end cap like the Apple which always falls off and gets lost. All in all this one is by far the better product and the price is great”

3. A Cheap Capacitive Stylus With A Triangular Build

This stylish capacitive stylus (which can be had for less than $10) has a distinctive triangular build, which gives it some heft and prevents unwanted rolling off a desk or counter. If you’re looking for an alternative to smudging your smartphone or tablet touchscreen with your fingers, this could be an affordable and sleek solution you also don't have to worry about charging. Several Amazon reviewers recommend it for this purpose and appreciate that it feels substantial but also comfortable to hold. Unlike the Apple Pencil, it has a mesh fabric tip, which means you won’t hear any of the tapping noises that are associated with harder tips.

Performance-wise, most Amazon reviewers also report solid responsiveness when using this stylus on all kinds of devices, including Apple and Android tablets, touchscreen computers, and smartphones. You may have to press slightly harder than with a pressure-sensitive pen, but this should offer sufficient and enjoyable control for note-taking and some light doodling. Take your pick of a few different colors.

Positive Amazon review: “I bought this pen to replace my Apple Pen that I have lost/misplaced. Wasn't sure what I would get for $10 but I was more than surprised by the quality and ease of use. Definitely a good purchase!”

4. A Budget-Friendly 2-Pack Of Capacitive Styluses

At first glance, this universal capacitive stylus looks exactly like a standard pen. And it's almost priced like one too, coming in at under $15 for two pens. But while it features a stainless steel and aluminum body and even a rubber grip and pen cap like you’d find on ink pens, this product is actually made to write on any type of touchscreen. As an added bonus, this stylus comes in eight different color options, all of which come packaged in a convenient box for storing the stylus and accessories you’re not using. In addition to the tips provided on each of the two pens, you’ll receive two fiber tips and four plastic tips with a fine tip.

The disk-shaped plastic tips might seem strange when you start using them, but most Amazon reviewers, even those skeptical of this tip, report pleasantly responsive performance with this precision tip after taking some time to adjust to it. Others report success with the fiber tips and suggest that they're hardier and smoother than rubber tips they’ve used. If you’re still on the fence, the more than 20,000 reviews and overall 4.5-star rating on Amazon might sway you toward giving this versatile and affordable stylus a try for your Apple and non-Apple devices, all without needing to worry about a battery.

Positive Amazon review: “I have a number of sketch programs downloaded such as bamboo paper and graphite on both my Apple pro 9.7 and my surface pro 3. I have been using both the Apple and Microsoft pens [...] But neither can out perform the set of Meko high sensitive stylus that I recently purchased. The feel in the hand the ability to actually affect a piece I am drawing with a lighter or harder stroke. I am blown away by the quality and the sophisticated design. I am an artist and these pens are my got to pens when working digitally. Love em!”

This programmable stylus offers two desirable Apple Pencil traits (pressure sensitivity and programmable gestures) and levels up with a finer 1-millimeter tip. It also has a pressure-sensitivity rating of 2,048 levels. Apple hasn’t revealed the exact sensitivity of their stylus, but essentially this number means that you’ll enjoy a nearly pen-to-paper experience with the Adonit Note+, which could be ideal if you’re looking to draw with your iPad. The two programmable shortcut buttons on the stylus will also come in handy.

While the Note+ offers PDF annotation and works with numerous art-centric and productivity apps, you’ll be best served by this stylus if you do research before buying to note which apps you care about are compatible with button shortcuts and other features including palm rejection and tilt and pressure sensitivity. Not all programs support all of these traits, but certain programs such as Colored Pencil, ArtStudio Pro, Zenbrush 2, and Animation Desk, do. Amazon reviewers who use supported apps report a solid and enjoyable performance. While this stylus requires a USB-C cable to charge it, you should get a full 10 hours when it’s fully powered, and you can actively use it while you charge it if you’d like to keep working when the battery is low.

Positive Amazon review: “Very satisfied with my purchase. I'm an artist so I use programs like procreate and clip studio and works very well based on pressure sensitivity and it's very hard to find an apple pencil alternative with pressure sensitivity."

More like this
9 Bullet Journal Alternatives
By Megan Gray
The 10 Best Brooklinen Alternatives
By Lauren Moison
How To Hide Cords Under A Desk
By Jenny White
CASETiFY Vs. Otterbox Phone Cases: Which One Is Better?
By Lauren Moison
Get Even More From Bustle — Sign Up For The Newsletter
From hair trends to relationship advice, our daily newsletter has everything you need to sound like a person who’s on TikTok, even if you aren’t.

This article was originally published on Jan. 2, 2021