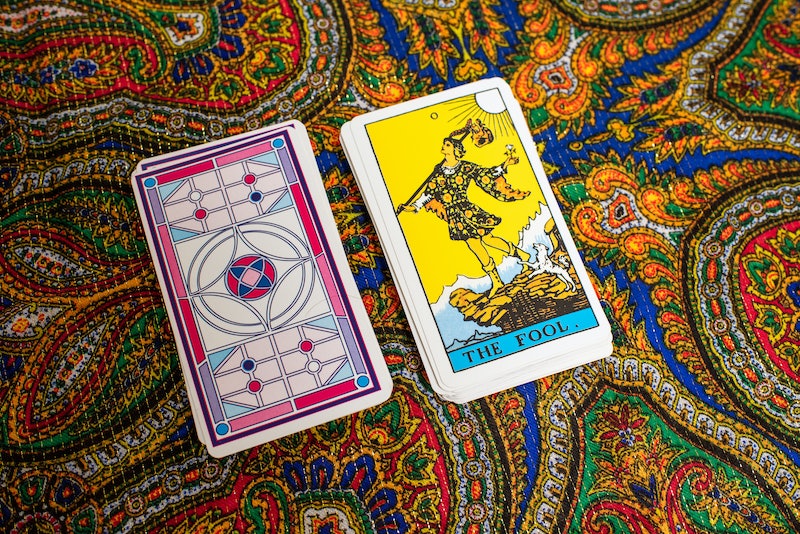 Tarot cards are so much more than just a witchy TikTok gimmick or must-have sleepover accessory. These symbolic cards have long been used as a tool for divination, self-reflection, and strengthening our intuition. One of the most well-known and significant characters in the tarot is the Fool. Whenever this iconic card makes an appearance in a tarot spread, it can indicate that some important new beginnings are afoot. If you’re interested in mastering the mystical art of tarot reading, you’ll want to be well-versed in the meaning of the Fool card.

For those who are new to the tarot, it helps to start with some basics. A deck is comprised of 78 cards, and it’s divided into two categories known as the major arcana and the minor arcana. The Fool is one of the 22 major arcana cards, all of which speak to larger themes and greater karmic lessons within our lives. Unlike the minor arcana — which include cards like the Two of Cups or the Nine of Pentacles — these cards do not have suits. Rather, each major arcana card depicts a classic archetype that corresponds with our soul’s overarching mission through life. In most modern tarot decks, the Fool is card zero, which is often considered the very first card in the ascension of the major arcana... something that can symbolize exciting things in the querent’s future.

Here’s everything to know about the the Fool in tarot and how to interpret its meaning in a tarot reading.

What Does The Fool Tarot Card Mean?

The Fool is an especially significant card within the tarot as it begets the start of a new journey. It represents spontaneity, possibility, and the endless potential and risk of every adventure. The Fool is carefree, youthful, and optimistic about the future — and this card can serve as a reminder to embrace these qualities within yourself as you make decisions and take a chance on new things.

This card also symbolizes beginner’s luck, so there’s an air of blissful ignorance to the energy of the Fool. It embodies the excitement of someone who has not yet been jaded by life’s setbacks or discouraged by failures and thus can move forward with a sprightly sense of idealism. The Fool archetype may not have the most wisdom or experience under its belt, but what this character lacks in foresight is made up for by its faith, as well as its positive and curious attitude.

The imagery on a tarot card is also very important in portraying its meaning. In the classic Rider-Waite-Smith deck — one of the most widely-recognizable and commonly-used today — the Fool card depicts a young person with a small dog at their side. They hold a small sack in one hand, illustrating that they’ve set off on a journey and packed lightly, and a white rose in the other hand, which symbolizes their youthful innocence and purity of heart. They’re looking cheerfully upwards toward the sky while approaching the edge of a cliff, seemingly unaware of the drop that lies just steps ahead — which represents both their naïveté as well as the power of the unknown that’s yet to come on their adventure. The sun is also shining, indicating that optimism and light are radiating upon the Fool’s journey.

What Does The Fool Card Mean When It’s Upright?

Some tarot readers take into consideration whether a card is pulled upright or reverse, in which case the card’s direction can indicate a variation in the meaning. When the Fool card appears in a tarot reading upright, then the more straightforward interpretation applies — or it can shift based on the other cards pulled.

Pulling the Fool upright indicates that it may be time to take a leap of faith and make the first steps on an exciting journey. It reminds you that no matter how much you prepare yourself, there is an element of embracing the unknown involved in any fresh start — so you should have faith in the limitless possibilities that lie ahead. This card’s optimistic energy can sometimes mean that luck is on your side.

The essence of the Fool card is generally about potential and beginnings, so it almost always corresponds with some sort of new adventure, endeavor, or opportunity taking place in your life. It highlights the power of being a dreamer and trusting in the universe. If the Fool card is pulled upright, the querent may also be faced with a choice or an opportunity — and moving forward may require them to have some faith and embrace potential rather than preparedness. They say fortune favors the foolish, and in the case of the Fool in tarot, that may be true.

What Does The Fool Card Reversed Mean?

If you pull the Fool card reversed (and choose to take reversals into consideration in your tarot practice), then its meaning is slightly altered. Typically, a reversal indicates either a blockage of the card’s energy or an inversion of its meaning. In the case of the Fool, a reversal can highlight the more “foolish” elements of this card. Naïveté, foolhardiness, and inexperience are all themes of the Fool in reverse, and it could indicate that decisions are being embarked on with thoughtlessness or without foresight — or serve as a warning against doing so.

A reversed Fool is also a sign that the querent should give proper thought and consideration to any new endeavors and beware of jumping into things too recklessly. Taking a risk may not result in the desired outcome — especially if it’s done with haste or while wearing rose-colored glasses. It could also mean that someone is being foolish or gullible about an opportunity and that some caution and discretion could be helpful in ensuring they don’t end up wandering right off a (metaphorical) cliff.