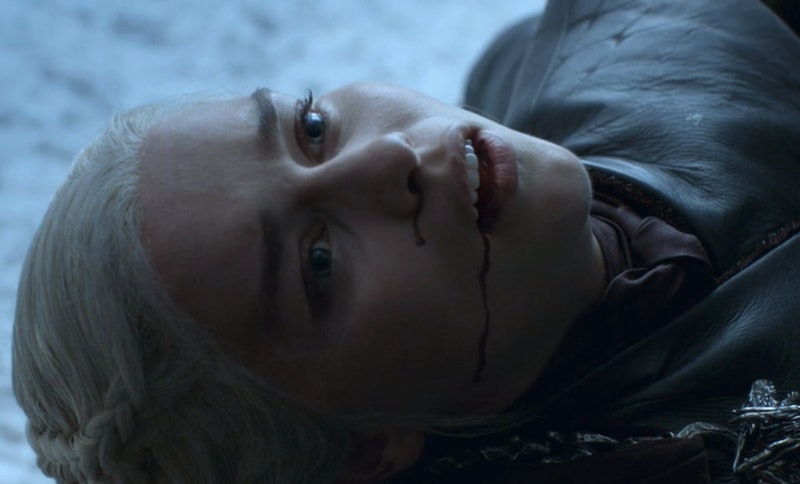 It’s been three years since HBO's Game of Thrones series ended. If you're a fan of the books, then you've still got some excitement to come — that is, if George R. R. Martin ever actually finishes the book series as planned. Plus, the spinoff prequel series House of Dragon premiered just last month in August 2022, so fans should be satiated for a while. But no matter where you stand in your GoT stan-dom, you can always keep the dream alive with a Game of Thrones Halloween costume idea. All your fellow GoT stans will appreciate a chance to be reminded of their favorite Sunday night pastime while also being impressed by your creativity.

There are tons of Game of Thrones Halloween costumes on the market, but Halloween is always a little more fun when you stray from the beaten path and put together costumes for smaller side characters or main characters from a specific scene. This can make for a more unique costume in a sea of store-bought GoT looks. While you're likely to see a whole bunch of blonde-wigged Daenerys Targaryens running around this Halloween, how many will we see with a knife stabbed through her heart by the hands of Jon Snow? You get the point.

Check out these six clever Game of Thrones Halloween costumes and get ready to bring back the excitement of the fan-favorite series.

At the end of Season 7, all hell broke loose as one of Daenerys' beloved fire-breathing dragons, Viserion, was struck down by the Night King and turned into a freeze-breathing Ice Dragon to be used by the Army of the Dead to destroy The Wall. So don't just dress up as a regular ol' GoT dragon — be an Ice Dragon! And a cute one, at that. Who doesn't want an excuse to cover their face with icy blue makeup?

Daenerys In Her Final Moments

There were many costume-worthy iterations of the Mother of Dragons throughout the series, but one of the most iconic is during her final few moments alive in the May 2019 series finale. During that episode, after which Dany proved herself to be the "Mad Queen" after all, Jon follows his heart by stabbing hers, resulting in her death. Recreate her look with her iconic black gown, some strategically-placed blood streaks, and the dagger of death.

Remember that one time at the beginning of Season 6 when Jon Snow was killed and was a dead body for a solid episode and a half? Then Melisandre used her mystical Red Priestess power to revive him? And Jon's sweet Direwolf Ghost wouldn't leave his corpse's side? It was tragic, and then Jon didn't say goodbye to him in Season 7 when he thought he would never see Ghost again. Yeah, true fans remember.

These canine cuties don't get nearly enough attention, so pay homage to one of the greatest by dressing up as Ghost. A wolf costume with red-colored contacts will do the trick, but commit to the details by getting a dog tag engraved with the name "Ghost.”

Our resident soothsaying Stark sibling, Bran, lived to become the King of the Seven (err, Six, since Winterfell remained independent) Kingdoms. Yup: Good ol' Bran is the King, because as Tyrion said, "who has a better story" than "Bran the broken"? (Lots of characters, but that's beside the point.)

Being a pseudo-goth punk in the 2000s was too much fun. With an embarrassing combination of screamo CDs, studded belts, and black eyeliner, it was an era to remember. No GoT character better encapsulated the emo/goth aesthetic than Euron Greyjoy, the notorious killer who did his darndest to court Cersei Lannister in the show's final seasons. Get in touch with your bad self and create a costume based on his essence.

We've covered King Bran, but how about his alter-ego? We stan a psychic avian animal avatar, so pay tribute to this mystical being by throwing together a super simple Three-Eyed Raven costume. It's just a regular raven costume, but with an extra eye thrown on and it's guaranteed to get some laughs for its simplicity and cleverness.

Adult Raven Crow Costume
Halloween Costumes
Jumbo Adhesive Wiggle Eye By Creatology
Michael's
More like this
35 Genius Secret Santa Gifts For Someone You Don’t Know Very Well
By Rebecca Deczynski and Lauren Grant
7 Joyful Alternatives To A Traditional Holiday Celebration
By Jessica Goodman
15 Gifts That Bring Your Faraway Loved Ones Closer During The Holidays
By Kaitlin Marks
69 Great Gifts For Guys No Matter What Their Hobbies Are
By Teresa Newsome, Mia Mercado and Brittany Leitner
Get Even More From Bustle — Sign Up For The Newsletter

This article was originally published on Oct. 23, 2019