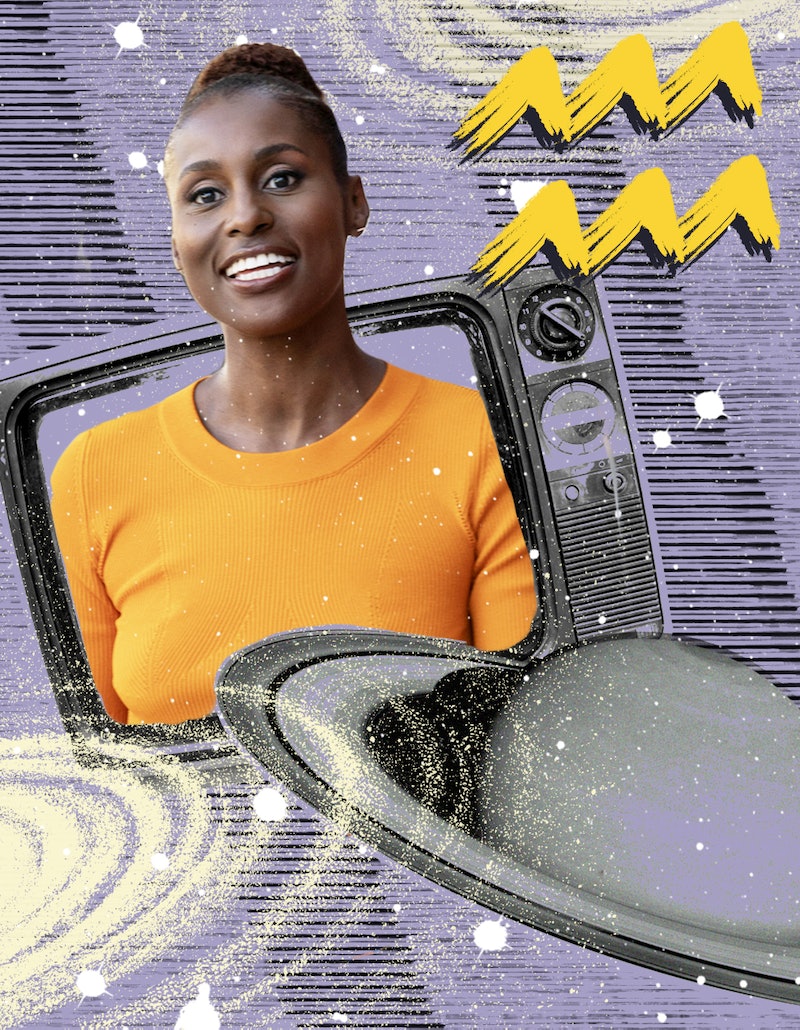 In Astrologically Speaking, astrologers make their case for your favorite character's zodiac sign, based on specific scenes, quotes, and even fashion choices. Here, astrologer Ryan Marquardt explains why Issa Dee from Insecure is most definitely an Aquarius.

Insecure started to wrap up its fifth and final season this month, leaving us glued to our screens as we watch main character Issa Dee (Issa Rae) embark on yet another collection of awkward mishaps in L.A., bathroom raps included. The series began in October 2016, with the pilot centering on Issa’s 29th birthday — suggesting that, if we followed the timing of the show to a tee, she would be a diplomatic and charming Libra. Others might argue that Issa Dee is probably an ambitious Capricorn, like the star and creator of the show Issa Rae on whom the character is based. But after some digging, and speaking to astrologer Ryan Marquardt, resident astrologer for The SoulUnity, we can confidently say that Issa Dee is actually an Aquarius.

For starters, the show is centered around a pivotal and ultra-uncomfortable time in astrology: the Saturn return. This phase of life happens around ages 27-29 and is all about shedding parts of our youth as we turn the page onto the next chapter of adulthood. “Issa Dee’s larger storyline has a theme of learning to let her freak flag fly, which is a very Aquarian trait,” Marquardt tells Bustle. “Issa is ambitious in her own right, but not as materialistic or money-driven as you’d expect from a Capricorn. What follows after Issa Dee’s 29th birthday is a series of awkward, bizarre, and hilariously unfortunate events and her mishaps are often more social rather than practical or career-oriented. That’s an Aquarian Saturn return if you ask me.”

Read on for a strong case for Issa Dee being a free-spirited and eccentric Aquarius.

1. Issa’s Friendships Are Her Anchors

Aside from awkward encounters and hazy relationship lines, a common subject throughout Insecure is Issa’s friendships. The meaning of friendship is a recurring theme of the show, revealing the ups and downs and eventually the falling out of close companions in your late twenties. The fourth season, which centers around the slow burn of her friendship with her best friend Molly, is quintessential to Issa’s development as we learn how important camaraderie is to her.

“Issa Dee frequently has vent sessions with her friends, especially Molly. In fact, Aquarius rules friends, and Issa Dee’s friendships are consistent anchors throughout every season of the show. Aquarians love getting their friends involved in all sorts of wild escapades and raucous activities,” says Marquardt.

2. She Has An Active Inner Monologue

Issa leans on her friendships through her vent sessions, but her mirror pep talks are the centerpiece of the show. Aquarians, as fixed air signs, are concerned with the betterment of society, but ironically can feel detached from others, which can explain why Issa turns to her routine sessions in front of her mirror to vent and air her grievances. Underneath it all, Aquarians can be pretty reserved with their emotions. She may be the queen of awkward encounters, but it’s Issa’s quirky ritual of rapping through the looking glass that earns her the badge of bizarreness. “Instead of using mirror affirmation to stroke her own ego, it’s more like she’s having random chats with herself and trying to hash out all the things she wants to express to other people in her life,” says Marquardt.

But even an emphasis on relationships couldn’t stop an Aquarius from feeling like the odd one out. “As the ‘outsider;’ air sign, Aquarius has an active inner monologue. Even though they have plenty of friends and social connections in their life, they require a lot of alone time to sort out their thoughts,” adds Marquardt.

Aquarius has earned the reputation of being the activists and humanitarians of the zodiac. They’re the water bearer, after all, giving life to the rest of the zodiac wheel. We see this key Aquarian trait illustrated with Issa’s work in We Got Y’all, a non-profit organization that aids underserved students of color through after-school programs, a job perfectly suited for an Aquarius. But it’s not long until Issa realizes the organization is a walking white savior complex where she’s the only Black person on the team, leaving her to make an important decision in order to stay true to her personal beliefs.

“An Aquarius has to learn that serving a cause and serving an organization are two very different things. Issa had the Aquarian courage and authenticity needed to leave such a disingenuous organization,” says Marquardt. “She’s since started her own event company, a career that oozes Aquarian energy by nature because great events professionals bring people together based on similar interests,” Marquardt adds.

Issa Dee is authentic, relatable, and odd in all the right ways. Her work in activism and need for camaraderie make a strong case for the quirky protagonist being a genuine Aquarius. Context clues may point to Issa Dee being a social-oriented Libra or a down-to-earth Capricorn, but her eccentricity along with the show’s plot centered around surviving painfully awkward situations in the quest to find her place in the world that asserts her as a true-to-form Aquarius.