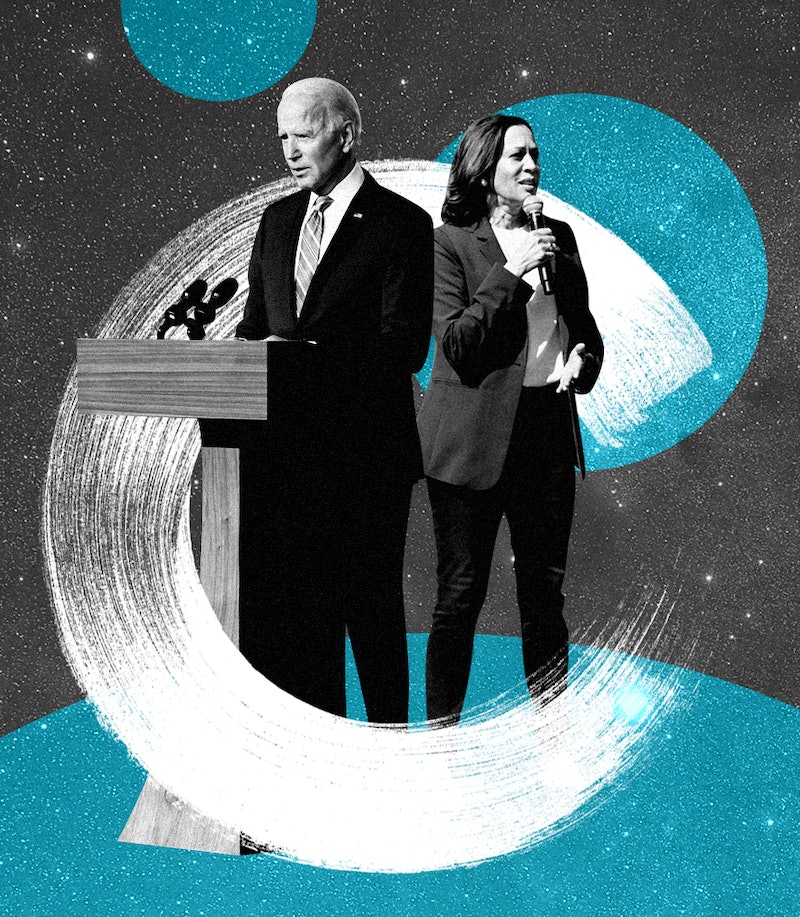 New year, new administration heading into the White House as of Jan. 2021. President Joe Biden and Vice President Kamala Harris will have a lot of pressing issues on their plates as they settle into their new roles. And while they've discussed their plans for working together as a team, there's always room to dig deeper by looking at the astrological compatibility between Joe Biden and Kamala Harris to see what the stars have to say about their chemistry.

When looking at their birth charts, Biden and Harris' connection appears strong. "This looks like a highly productive partnership," pop culture astrologer Kyle Thomas tells Bustle. While it takes a lot more than compatible zodiac signs to yield a successful term in the Oval Office, it can be fun to look at what the planets have to say about the triumphs and challenges that lie ahead for the future first- and second-in-command.

The astrology between Biden and Harris includes some powerful alignments — as well as some points of cosmic tension that could challenge one another. Here's the scoop on Biden and Harris' professional partnership, according to astrologers.

Biden (born Nov. 20, 1942) has his sun in passionate Scorpio, which makes him a powerful force to be reckoned with — and this is amplified by the fact that he also has Mercury, Venus, and Mars in Scorpio. Having so many personal planets clustered together in fixed water sign Scorpio gives Biden a sharp, stealthy, and calculating edge in the way he thinks and chases his goals. Harris (born Oct. 20, 1964), on the other hand, is a diplomatic Libra, gifting her with a strong sense of justice. Scorpio and Libra neighbor each other in the zodiac, which means it's easy for these two to recognize positive qualities in each other and offer opportunities for growth.

Next up, their moon signs. The moon in astrology represents private emotional matters. Biden has a grounded Taurus moon while Harris' is in headstrong Aries, which also happen to be neighboring signs. Despite the moon being in different signs, they're actually only three degrees apart in their charts, which creates a powerful conjunction aspect between them. Translation: Biden and Harris easily see eye to eye when it comes to personal issues and can relate to each other in a foundational way.

It's also interesting to note that both Biden and Harris were born under a full moon. On an astrological level, this indicates that both of them are especially relationship-oriented people who can handle the pressure of a crisis. "They feel comfortable together and they may even have a somewhat psychic bond," Thomas says of their moon zodiac sign connections. "They are receptive and open to one another and feel a strong loyalty."

Lastly, Biden and Harris both have communication planet Mercury in Scorpio, and this placement boosts their understanding of what the other wants to express and shows that they think through logistics in a similar way. Mercury in Scorpio gives people an investigative approach to communication, which means they're not afraid to go beneath the surface and face darkness in order to get to the truth of a matter.

Rising zodiac signs, aka ascendants, illustrate our surface-level personality and dictate the placement of the astrological houses in our birth charts. Biden and Harris' ascendants fall into opposing signs of the zodiac — Biden is a Sagittarius rising while Harris is a Gemini rising. This brings a spark of energy to their connection, for better and worse. Oppositions in astrology can indicate tension, so Biden and Harris may sometimes feel like they're in a tug-of-war when it comes to how they present themselves and interact with the world around them. Harris' Gemini rising is hyper-focused on facts and fine print, meaning she excels when it comes to examining every detail of a situation from up close. Biden's Sagittarius rising, on the other hand, shows he may prefer to step back and look at the big picture of a situation, taking things in from a broader and more philosophical perspective rather than zooming in on the smaller details. "This can add an element of frustration at times," astrologer Lisa Stardust tells Bustle. "They may have opposing views, but will try to work together to take a [unified] standpoint on situations."

With their rising signs in opposition to one another, Biden and Harris' surface-level differences may be highlighted — but this placement also precipitates growth, synergy, and a natural desire to find common ground. "[Having] their ascendants across the sky from one another denotes a balance to their union," Thomas says. "They have many similarities in their shared vision and ways of moving about the world." The polarity of their rising signs gives the relationship an exciting charge, but also leads to a natural symbiosis in the way they react to situations and present themselves. Opposites attract, after all.

The mutable signs of Gemini and Sagittarius are some of the most adaptable and open-minded energies of the zodiac, which bodes well for the intensity of the professional tasks they have ahead. "These signs are highly communicative, intellectual, and crave activity and knowledge," Thomas says. "Looking at the world from different perspectives is important to them both."

We can get even deeper into Biden and Harris' dynamic by examining some of the specific planetary aspects between their charts. The planets in Harris' chart make some significant connections to Biden's tenth house cusp, which is known as a Midheaven in astrology and represents career path, public image, and legacy. "Kamala’s Jupiter is also in a trine with Joe’s Midheaven, symbolizing a connection that will bring fortune, grace, wisdom, and growth to them both," Thomas says. "[Her] Venus is also conjunct Joe’s Midheaven, which shows that she helps him secure his career goals."

These planetary pair-ups bring growth opportunities, high aspirations, and optimism to their combined career endeavors, especially considering they involve Venus and Jupiter, which are considered to be the most fortunate and luck-bringing planets. "Joe provides more practical and real-world approaches, whereas Kamala brings grace, charm, and higher aspirations to the pairing," Thomas says.

There's also a sparkling connection in the way Biden and Harris' sun and moon, known as the luminaries in astrology, light up each other's zodiac charts. "Joe’s moon ignites Kamala’s eleventh house while Kamala’s sun and Mercury are radiating within Joe’s eleventh house, [indicating] their shared goals are emotional and synergistic," Thomas says. The eleventh house in astrology represents community, friendships, and the attainment of aspirations and wishes, so having such significants planets working within this area of each other's charts illustrates what a visionary pairing this could be.

According to Stardust, the positive planetary aspects between Biden and Harris' charts show that the pair shares a similar vision for the future — and they'll be able to manifest their common goals with clarity, energy, and excitement. "This partnership will inspire growth," Stardust says. "They see the whole truth and the bigger picture, and will be more open and honest than former presidencies."

Is This Partnership Meant To Be?

According to astrology, it appears that Biden and Harris' connection may actually be fated in the stars. "Kamala’s North Node of destiny falls within Joe’s seventh house [of partnerships], showing that they were meant to be partners in this lifetime," Thomas says. "It shows that Kamala is stepping toward her true purpose through knowing and [working] with Joe."

The Nodes of Destiny represent our true path and the things we need to overcome to reach our lifelong calling, and it just so happens that the North Node is currently in Gemini — exactly where it was when Harris was born. With the return of the North Node to Harris' natal placement, we can see that the events happening now are a fated part of her personal and professional journey, marking a turning point toward her future. In other words, this journey is only just beginning.

This article was originally published on Jan. 11, 2021