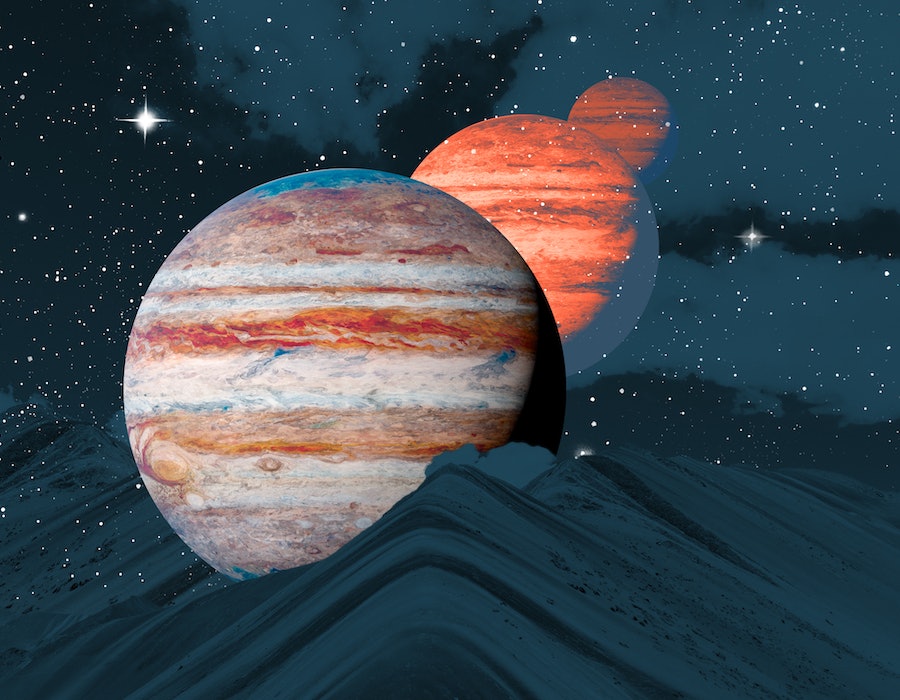 Welcome to the second half of 2022, star babes! As we flip our calendars over to the month of July and prepare for the dog days of summer, we’re also officially transitioning into the latter half of the year. The astrology of July 2022 brings some galactic growing pains, but it also serves up plenty of positive energy shifts that we can work with as we reflect on the past six months and make plans for the future. Having a heads up on the important astrological events in July can help us make the most of all the planetary activity.

The month kicks off with cosmic fireworks, as hotheaded Mars will be locked in a planetary power struggle with obsessive Pluto on July 1, causing ego clashes and edgy confrontations. This is the only square-off these two aggressive planets will make with each other all year, so try not to give into competitiveness or make rash moves. The full moon on July 13 will amplify our powerful Cancer season feelings, but also inspire us to channel our emotions into productive plans. Mental planet Mercury and romantic planet Venus will be entering Cancer this month, too, making us extra sentimental in the way we think and conduct relationships. Thankfully, once Leo season begins on June 22, we can dry our tears and embrace a confidence-boosting, hot-girl-summer attitude — and the fiery new moon in Leo at the end of the month gives us a chance to reconnect with our passions.

Additionally, all the influential personal planets will be ingressing into new zodiac signs this month. Expect to feel the vibes shifting when it comes to communication, love, and the way we take action. And speaking of cosmic changes, both growth-oriented planet Jupiter and wounded-healer comet Chiron kick off their annual retrogrades this month, too. Take these backspins as a sign to slow down, connect with yourself, and enjoy the magic of midsummer.

Here’s the full scoop on all the astrological events happening in July 2022.

We’ll still be deep in the waters of Cancer season 2022 through the first few weeks of the month, inspiring us to seek deeper emotional connections and comforts. During Cancer season, which runs until July 22, our sensitivities are supersized and our feelings come first, so make sure to honor your softer side and find ways to nurture your heart.

With Cancer energy at the helm, we may find ourselves feeling extra crabby, too. This is due in part to the fact that sun will be opposing the ever-extreme and power-hungry planet Pluto — an aspect that culminates with their July 19 face-off and builds up through the latter half of the season. We’ll also have a series of tough square aspects between some of the major planets throughout Cancer season, and these can bring up tensions and challenges in all different areas. In addition to the aforementioned squabble between Mars and Pluto, mental planet Mercury will be squaring both illusory Neptune and expansive Jupiter during the first third of July, making it difficult to think and communicate clearly or get a solid grip on reality. Mid-month, romantic Venus will square Neptune as well, which could trigger relationship insecurities or cloud our judgment in love.

Obviously, Cancer season is in full effect up through the final third of the month, but we’ll feel this emotional energy even more powerfully once communication planet Mercury joins the sun in Cancer on July 5. With Mercury in Cancer, we’ll have a greater desire to express our feelings and rely on our intuition, and we might be extra sensitive in the way we perceive information from others. While this two-week-long transit could make us a little defensive or passive aggressive, it’s great for facilitating heart-to-heart conversations and communicating with more gentleness.

Mercury isn’t the only personal planet making moves on July 5: Action-oriented Mars leaves its home sign of Aries and enters grounded earth sign Taurus territory on the very same day. When Mars is in sensible and stable Taurus, all zodiac signs will feel more deliberate and pragmatic about how they move toward their goals. Instead of rushing toward the finish line, we’ll favor a slow-but-steady approach to getting what we want — which is a helpful vibe as we approach the thick of the sweltering summer season.

Full Supermoon In Capricorn On June 13

We’ve got another powerful supermoon coming in hot! The July 2022 full moon on July 13 is rising in the hardworking and pragmatic sign of Capricorn, and it’s here to help us get serious about our goals. Also known as the Buck Moon, this is the first full moon of the summer — and thanks to its closer-than-usual proximity to the earth, it will appear larger than an average lunation. While this full moon is sure to bring our emotions to a climax, it’ll also inspire us to buckle down and channel these feelings into productivity. It’s a great opportunity to make progress on our career goals and build a solid foundation for the next half of 2022.

Calling all hopeless romantics: Venus enters Cancer on June 17, so the planet of love, luxury, and romance is about to get super sentimental. During the past month of Venus in Gemini, we’ve felt extra flirty, fun-loving, and casual about relationships. However, now that Venus is in sensitive and emotional Cancer, we’ll probably be a lot more protective of our hearts and attached to our feelings. We may begin to notice a desire to build more security and commitment into our summer flings, or find ourselves feeling nostalgic and wistful over past affairs. This is a great time to deepen a connection with a partner or treat yourself to lots of sweet solo self-care.

Turning Up The Heat With Big Leo Energy

Dry your Cancer season tears, because the sun enters glitzy and glamorous Leo on July 22 and officially turns up the heat on summer. This kicks off Leo season 2022, bringing all zodiac signs a sense of optimism and a big boost to our confidence levels. The sun is Leo’s ruling planet, after all, so it’s time to let our authenticity shine! Use this influx of Leo zodiac energy as an excuse to embrace your inner superstar and activate your hot girl summer mode.

The feisty Leo season flame will burn extra brightly during the July 2022 new moon on July 28, during which the sun and moon will align in this fire sign’s realm and kick off a fresh lunar cycle. The new moon in Leo is a beautiful time to start chasing after your passions, planting seeds for future creative endeavors, and putting yourself out there in a big way.

Last month, we added Saturn and Neptune to the current retrograde rotation — and July’s astrology is bringing more of the same. Sensitive Chiron, a minor planet, begins its annual retrograde on July 19 in Aries, where it’ll backspin through late December. Chiron is often referred to as the “wounded healer” in astrology, and its five-month-long retrograde periods help us to process our past pain and start facing old wounds.

During the final days of the month, on July 28, we’re also welcoming Jupiter retrograde, which lasts through late November. Jupiter is the planet of luck and abundance, so unlike some planetary retrogrades, its effects aren’t usually too troublesome. Instead, Jupiter’s backspin is a time where we can process our spiritual and philosophical growth, question our belief systems, and explore the bounds of our ideologies. While the retrograde begins in Aries, Jupiter will eventually moonwalk back into its traditional home sign of Pisces, giving us a few more months of the Jupiter in Pisces magic we experienced earlier this year.