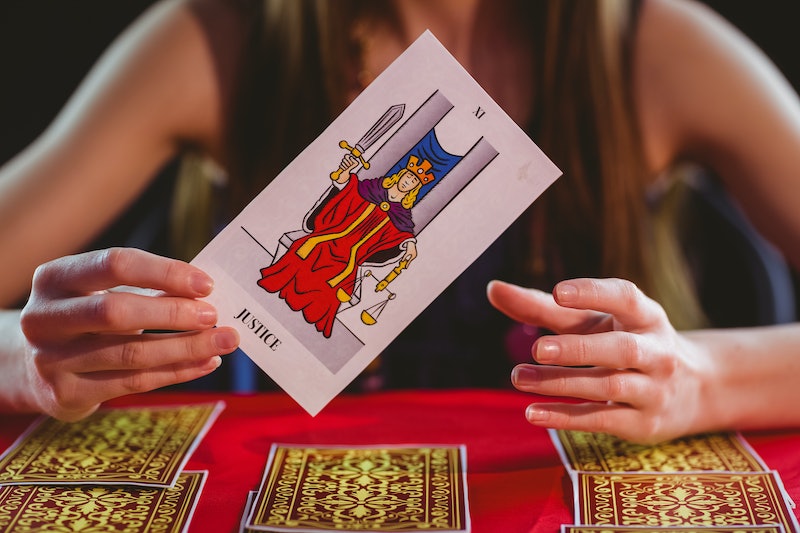 The Justice tarot card is one you can pull and immediately have an idea of what it means. After all, justice is all about getting what’s deserved. Naturally, it’s safe to assume that the Justice card is about getting what you deserve in the area of your life you’re asking about. While that’s definitely one way to interpret the card, there’s a lot more to it than that, and professional tarot readers share the meaning of the Justice card and how you can apply it to our life.

According to Davida Rappaport, spiritual counselor and tarot reader, Justice is an interesting card because its place in the major arcana is different in certain decks. “Depending upon whether you are looking at the Rider-Waite-Smith deck or the Marseille (and decks produced by Lo Scarebo), Justice will be either number 8 or 11 and is often switched with the Strength card,” Rappaport says. “I prefer it as 11, following the Wheel of Fortune and before the Hanged Man.”

Since the card follows the Wheel of Fortune, which is all about karma, Justice is your reminder that all actions have consequences. “You must be accountable for your actions,” Rappaport says. “Always do the right thing!”

What Does The Justice Tarot Card Mean?

The Justice card is associated with balance, truthfulness, seeking restitution, and faith in lawfulness. You can get a sense of that just by looking at the card. On the tarot card itself is an image of Lady Justice sitting on a throne holding scales in one hand and a sword in the other.

“When Justice comes out, we should pay attention to the scales that she holds in her left hand since this is our cue to weigh the pros and cons before making a decision that could influence the balance of our lives,” tarot reader Liz Simmons tells Bustle. “Justice wields the sword of truth in her right hand, suggesting that we may need to cut away the fluff to see something for what it is.” If there’s a decision that needs to be made, Justice brings the message to take a “more logical and reserved” approach.

In general, Justice is also tied to the law, so there may be a legal aspect to the question you’re asking about. There may be contracts that need to be signed as well. But on a more personal note, Simmons says Justice is a card that tells you when it’s time to own something in your life in order to live in your truth.

What Does The Justice Card Mean When It’s Upright?

Like every tarot card, there are many different ways to interpret it. Each reader will have their own opinion on what it means and how it applies to the situation being asked. So one way to interpret Justice pulled upright is it’s a reminder to be accountable for your actions. This can apply to any area of your life from work to relationships. According to Rappaport, it’s important to take the high road no matter what may come next. “Right course, right action,” she says. “If you are already taking the high road, you have been validated.”

Justice in the upright position can also mean you’ll be signing an agreement or a contract soon. This includes anything from purchasing a home to signing on to a new job. Any legal document can be represented by Justice, Rappaport says. Since it is part of the major arcana, you’ll be dealing with things that may affect your life in a big way.

Depending on the cards you pull with Justice, it may even indicate that marriage is in your future. “If Justice comes out with the Hierophant, Lovers, or 4 of Wands, it could quite literally refer to a marriage proposal,” Simmons says. It can also refer to the “lawful side” of relationships such as signing a lease together or combining your assets.

While Justice can symbolize big life events on the horizon, it’s a card about reflection as well. According to Simmons, you may need to “logically reflect” on the pros and cons of the situation at hand before signing and making anything official.

What Does The Justice Card Reversed Mean?

When the Justice tarot card is pulled in reverse, it may be in your best interest to exercise caution. That’s especially true if court cards or the Emperor or Empress are present in the reading as well. “Reversed, the Justice card can indicate a betrayal of trust, or that someone may be untrustworthy,” Rappaport says. “Be careful when dealing with questionable people and always be responsible and accountable for your own actions.”

The Justice card in reverse would also mean the end of a commitment. According to Simmons, a legal matter could be coming to an end, but one that may not go in your favor. It might also represent the end of a marriage. In your career, Justice in reverse may be your cue to cut ties with an employer if you feel like you aren’t getting what you’re worth.