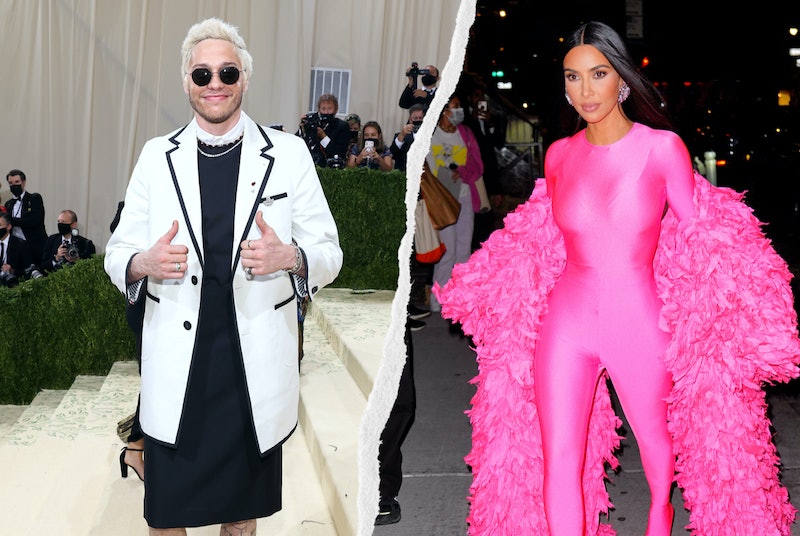 If you tuned in to Kim Kardashian’s SNL takeover in early October, you may remember her role as Princess Jasmine in a decidedly adult version of Aladdin, played by comedian Pete Davidson. In the skit, the two share a kiss, and up until recently, the idea of a blossoming romance between the pair was purely fictional. Since the episode aired on Oct. 9, rumors of a relationship between Kardashian and Davidson have been swirling.

The stars went viral over Halloween weekend, when photos surfaced of them holding hands on a rollercoaster ride. Since then, the two were spotted at a chic Manhattan restaurant, and Kardashian even made the trek out to Staten Island to have dinner with Davidson, who still lives in New York’s “forgotten borough.” While the two are definitely not officially dating — friend Chrissy Teigen told paparazzi she had “no idea” if they were together — it’s still worth leaning on the cosmos for an opinion on Kim K and Davidson’s astrological compatibility.

Both stars have been tight-lipped about the romance rumors, but an unconfirmed relationship hasn’t stopped our minds from wandering. Bustle spoke with Kirah Tabourn, co-founder and head astrologer for CUSP Astrology, an app focused on dating and relationships, to dig into their birth charts and get a celestial opinion on whether Kim Kardashian and Pete Davidson have any astrological compatibility.

Right off the bat, the pair are extremely dissimilar based on their sun sign alone. Kim Kardashian (born October 21, 1980) is a sociable and diplomatic Libra. These cardinal air signs are ruled by Venus, the planet of beauty and love, and they’re all about justice, balance, and lots of romance. Pete Davidson (born November 16, 1993), on the other hand, is an elusive and passionate Scorpio, a fixed water sign most famous for being super guarded with their emotions. Scorpios are ruled by Pluto, the planet of rebirth and transformation, which is probably a bit too intense for a free-flowing Libra. Libras are regarded as the socialite of the zodiac, appropriate for Kardashian’s social status, while Scorpios are typically recluses.

Water and air are bound to bring rainy showers, which is why this pairing isn’t typically the perfect match and one of the many reasons why the idea of them as a couple is so strange — I mean, besides the fact that it seems like the pair are from two totally different planets.

Their Earth & Water Moons Are A Balancing Act

When it comes to astrology compatibility, your moon sign is crucial since it reflects your inner self and represents your emotional responses. As if the pair’s compatibility couldn’t get stranger, Kardashian’s moon sign is in sensitive daydreamer Pisces, while Davidson’s moon sign is stationed in pragmatic and no-nonsense Capricorn. Pisces is ruled by the planet Neptune, which represents all things magic and mystical. This contrasts to Capricorn’s strict ruling planet, Saturn, which symbolizes discipline and restriction.

“Kim has a lot of mutable placements, including her Pisces moon,” explains Tabourn, “which implies she needs to always be on the go, constantly adapting and shifting and moving through the world.” With Davidson’s Capricorn moon embodying all things regulation and structure, this might cause a bit of friction. “[With her Pisces moon] she would be someone who rejects too much stability, for it would probably feel suffocating to her.”

As stark as these differences are, they work together, surprisingly. If the two get to a point of committing to being vulnerable with their emotions, they help balance the other out. Kardashian could soften Davidson to view his emotions less analytically, while Davidson could help Kardashian set boundaries with her feelings. (Pisces placements could learn a lot from this.)

Your Mars sign is important when it comes to astrological compatibility. Mars is the planet of aggression, intimacy, and determination. It’s basically how we assert our power and pursue our ambitions. Both Kardashian and Davidson share a Mars sign in the fiery Sagittarius, which implies the two are self-assured in their passions and aren’t afraid to be adventurous in the pursuit.

“One thing that stands out about their synastry (the compatibility between particular elements in their chart) is that their Mars’ are nearly exactly conjunct, or aligned,” explains Tabourn. “This means that Mars was in the same spot in the sky when they were both born, denoting a resonance between the two of them. When people have Mars synastry like this, they move and take action in very similar ways. If they are dating, it’s unlikely that either of them was shy about their interest in each other.”

Their Mercury Sign Suggests They Speak The Same Language

Despite their notable differences, Kardashian and Davidson have an undeniable connection. They both share a Scorpio Mercury, meaning there’s potential for mutual understanding for one another. Mercury is the planet that rules our communication styles and mindset. Scorpios can be aggressive communicators being that the zodiac sign is emotionally-driven and passionate, and because of this, they can be misunderstood by the other zodiacs. It’s likely that, while the two may seem odd on the surface, underneath, they can speak comfortably about what’s on their hearts without fear of the other being emotionally detached. Their shared Mercury could also speak to why Kardashian is so quote-unquote “intrigued” by Davidson.

There’s no way around it: Kim Kardashian and Pete Davidson don’t make a ton of sense on the surface. Although some differences in their birth charts, like a square-off between their air and water sun signs, are stark, a dig into their placements proves that their romance somehow isn’t totally left field. Sure, they’re both in totally different places in life, but when has that stopped anyone from exploring? And besides, defying conventions can be an important lesson for them — even if it’s just for fun.

More like this
Why Harry Styles & Olivia Wilde Make A Great Couple, According To Astrology
By Nina Kahn
Here’s Your Daily Horoscope For September 26, 2022
By Mecca Woods
This Tarot Card Means It's Time To Reach Your Magical Potential
By Brittany Beringer
Your Horoscope For October 2022
By Alexandria Lettman
Get Even More From Bustle — Sign Up For The Newsletter