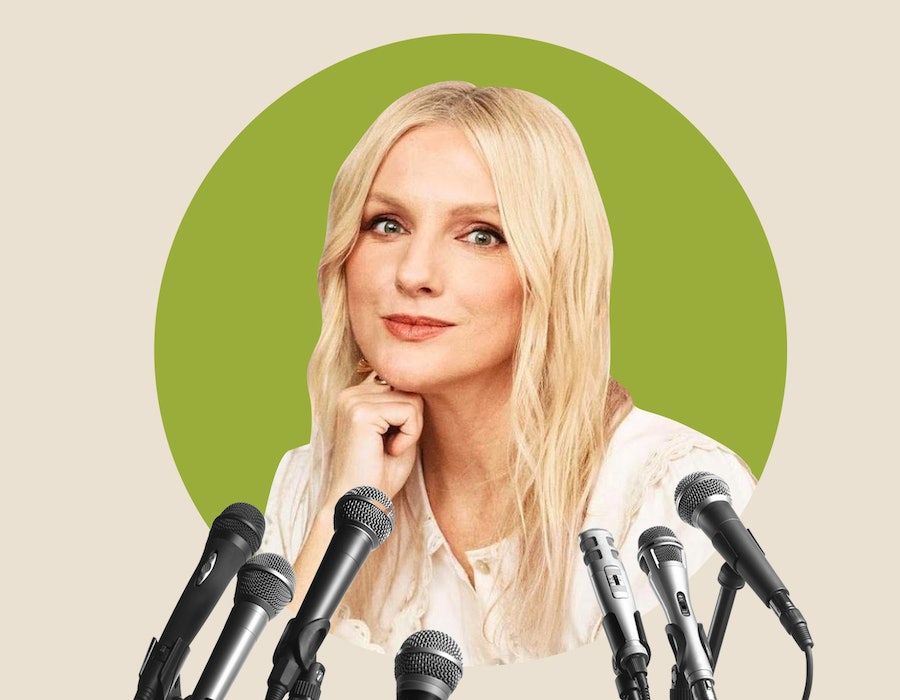 In Bustle’s Quick Question, we ask women leaders all about advice — from the best guidance they’ve ever gotten to what they’re still figuring out. Here, media mogul Laura Brown talks about navigating career challenges and the power of understanding your worth.

In February, InStyle shuttered its print edition, and editor-in-chief Laura Brown found herself out of a job. “I wasn’t sitting there thinking about, ‘Oh, I must go away and then come back and do a statement,’” she says. Instead, she posted a video of herself doing tequila shots with her former team, shouting, “Onward!” She says her attitude was, “I’ll come back with something later. I’m just eating a McMuffin right now.”

Nine months later, Brown has finished her snack and revealed her next venture, LB Media. This new chapter will encompass a lot: She’s executive-producing a movie about the fashion industry with HBO’s Bruna Papandrea, and she’s also designing a collaboration with Sézane and consulting for other brands. In early 2023, she’ll launch So Seen, a podcast in partnership with SeeHer, a nonprofit promoting accurate portrayals of women in media and advertising. She says, “I’m open to everything and I’m just going to see where it takes me.”

Whatever happens, she wants to create “a really positive community of creatives and brands and produce things that are helpful and entertaining and on the right side of history.” (This isn’t new territory for her; she made Dr. Anthony Fauci, Stacey Abrams, Me Too International founder Tarana Burke, and Black Lives Matter co-founder Ayọ Tometi cover stars.)

The Sydney-born editor’s half-million Instagram followers were excited about the news. “Everybody has been calling me and stuff, which has been lovely, but I’m [like], ‘Great, let’s talk in January. I’m going to Australia,’” she laughs.

Brown’s popularity is well-earned. She’s famously one of the friendliest people in media (her Instagram is an endless feed of selfies with the likes of Jennifer Coolidge, Kiernan Shipka, Tan France, and others), and even over the phone, she sounds like she’d be a hugger.

Ahead, Brown shares her advice for making work friends, her confidence tips, and how she moves on from setbacks.

You’ve talked about your worth not being dependent on your job title. Did you always feel those two things were separate for you? If not, how did you get to that place?

When I was younger, of course — “Oh my God, I’ve gotten this job at Harper’s Bazaar or InStyle and wow-ee.” I think a lot of people still get seduced by all of that. It’s funny, I was in LA last week and I ran into a bunch of editors who were there for a Céline show, and they’d been flown out. It’s not the airfare you can afford or the handbags. It’s all sort of gifted and grafted and obligation-centered. It’s lovely but it’s not actually your life.

I think it’s about realizing where your power lies. And I actually do not like the term “empowering.” I find it very condescending. Every woman has power, whether or not they can see it as easily as others. If you have a change of job situation, you can’t forget everything that you’ve worked for. All the skills that you’ve accrued do not just float away. They stay with you. But it's up to you to remember that. Everything that you do — your professional currency, reputation, your friendships — I always say it's like a little house you build, brick by brick.

How do you cope with setbacks?

Wine? So, the day we all got liquidated at InStyle, I remember I got my computer and got on with my team to say, “Look, we were the best at what we did.” Just be frank and pragmatic about it. This is not the be-all, end-all of your life. It’s just not. Don’t give things, people, or circumstances power that don’t deserve it.

I was lucky enough to have a lot of people who support me — and I support them. No matter how social you are, everybody has this network. But really, I had a deluge of messages and DMs for a week. It was like reading beautiful eulogies, but you’re still alive — people going, “Wow, Laura, you’re so great, InStyle was so great.” I wouldn’t have gotten this if I just left. At all. And I didn’t leave — I was going to take my leave a little later.

How do you turn your brain off after a long, stressful day?

I’ll just do some zombie-sit and watch the telly, like Stephen Colbert from the night before. I just love him. Or I’ll go somewhere like Barbuto, my favorite restaurant in the world, and eat a big plate of spaghetti.

When do you feel the most creative?

Oh God, I call them night flights. Sometimes when I’m lying in bed, these thoughts go whizzing through my brain — ideas and concepts and headlines, all that kind of stuff. I have also had ideas when I’m awake, but some of my best ones have occurred in this semi-conscious state. It sometimes takes me a while to get to sleep because my brain just gets all fired up. I always used to say, when Sheryl Sandberg’s book said lean in, I said lie down.

How do you pump yourself up before a big meeting?

Understand that you are in the room, too. I think that really helped me when I was younger and I would meet people that were known or presented in a way to be intimidating. And I was like, “Well, I’m also here and I’m pretty smart and I’ve got social skills.” Remind yourself to equalize yourself with people, and then I think you’re fine in any room.

What advice do you have for making friends at your job or in your industry?

It’s weird now because there’s no water cooler, is there? But you don’t have to over-calibrate. I always say you can smell the effort sometimes. Just relax, get used to what you’re doing at work, hopefully do well at what you’re doing, and the rest is really organically going to come. You're all there in the first place because you have similar interests. So in a weird way, it's been winnowed down for you.

When you were just starting out in your career, who was your role model?

I was never, “Oh my God, I love this editor-in-chief for this magazine.” The attraction for me at the beginning was more about having access to the culture — “I’m from Sydney, what do you mean I can go see this Helmut Lang fashion show with my own eyes?” That was more seductive than, “I want to be like that lady.” Even though, of course, I really enjoyed Carrie Bradshaw, because come on. I’m a living, breathing gal.

I always loved Tilda Swinton because I liked how she — I mean, it wasn’t all her — but how she communicated visually and how she was so distinctively herself. I’ve met her a few times, and she’s just really down and really funny, too. I really admire distinctive women with an individual cultural currency rather than just, "Hi, I went on the red carpet and I borrowed this dress and I got all these Instagram followers."

Whether in media or fashion, what advice would you give somebody who's just starting out now?

Internships, if you can get them. They're so tough now. God, I really miss the simpler days. I feel like this word is so overused, but I really mean it: Be humble. Get the sandwich. It doesn’t mean you are lesser. Some of the people who I’m closest with are interns who got me my lunch when I was trapped in a meeting. I had more face time with them than with people in the art department, people in the features department.

Also, really listen to your inner 8-year-old: What do you like? What do you not like? You’ve got to follow the path that makes you feel good, not scared or unworthy or obligated or trying to pretend to be somebody you’re not. You can’t force anything.

What is one thing that you need advice on?

I need advice on how to manage my energies and not give it all up to things and people who aren't quite worth it. I’m absolutely exhausted. I think I still have a bit of a way to go on that.

Pick one word to set your intention for 2023?

Community. I really love bringing people together to do something great, making them feel involved and mixed in with other people they can benefit from knowing — not just because it’s obligatory or scene-y or makes everybody look cool. I have no interest in that. Building that community is going to be really, really, really key for me — next year, after I lie down.

More like this
Savannah Guthrie Got Her First-Ever Tattoo With This Former Wild Child
By Suzanne Zuckerman
At 28, Rosie Perez Risked Her Career To Stop Playing Stereotypes
By Gabrielle Bondi
Jessica Simpson On The Time She Was Pursued By A Backstreet Boy & An *NSYNC Member
By The Editors
Hailee Kaleem Wright's Topsy-Turvy Path From MTV To Broadway
By Samantha Leach
Get Even More From Bustle — Sign Up For The Newsletter
From hair trends to relationship advice, our daily newsletter has everything you need to sound like a person who’s on TikTok, even if you aren’t.