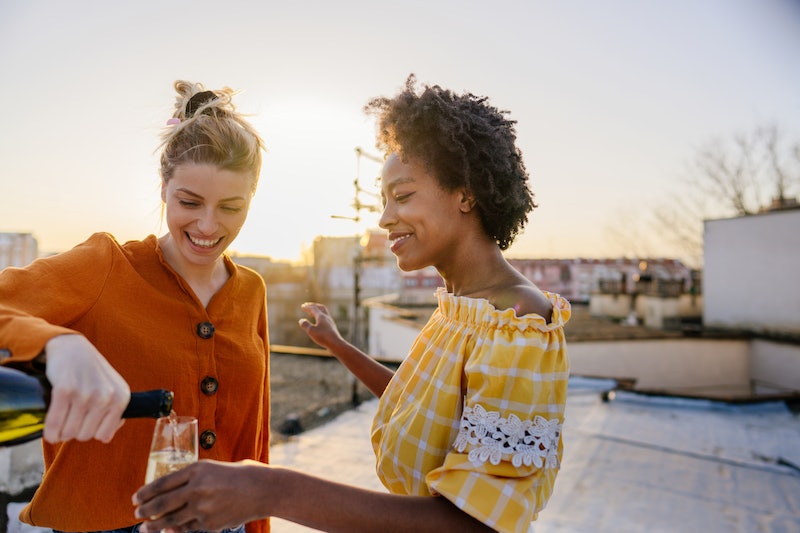 On October 22 or 23 of each year, the sun swims into watery Scorpio after spending a month airy Libra. If your birthday falls within a few days of these dates, then you might identify as a so-called Libra-Scorpio cusp.

Being born near one of the sun’s zodiacal ingresses doesn’t inherently make you a combination of two signs — planets can only be in one zodiac sign at a time, so even if you were born during the very last hour of Libra season, you’re still very much a Libra sun — but that doesn’t mean that someone born on the Libra-Scorpio cusp can’t have a significant serving of both energies present in their birth chart. Planets like Mercury and Venus always travel close to the sun in the zodiac, so there’s a solid chance that a late-October Libra will have some Scorpio planets in their chart (or vice versa for an October Scorpio). This could manifest as someone embodying both Libra and Scorpio characteristics, or what some might call Libra-Scorpio cusp traits.

Whether or not someone is born near the Libra-Scorpio cusp, all zodiac signs can feel the shifting energies when the sun transits through this part of the sky. Libra season always begins on the day of the fall equinox, which helps us find balance and build social connections as we begin our autumn journey. But we tend to get more introspective once the sun moves into Scorpio, and the surface-level interactions we had during Libra season have a chance to become more intimate and personal. The passage of each planet through the zodiac illustrates a journey — and in the case of the Libra-Scorpio cusp, this energy carries us into the heart of fall and asks us to build trust with the people around us.

While being a cusp sign isn’t technically a real astrological concept, you can still have lots of Libra and Scorpio zodiac energy in your chart if you were born near the sun’s transition between the two signs. If that’s the case, then understanding the Libra-Scorpio cusp traits can help you make sense of your most unique qualities.

As the sign associated with partnerships, it’s no surprise that Libras are often very preoccupied with their one-on-one relationships. And while Scorpios may not be one of the social air signs, these emotional water babies are equally invested in the transformative power of their interpersonal connections. People with Libra-Scorpio cusp qualities tend to seek deeper intimacy in their relationships and make their bonds a priority, as both signs know the value of being able to trust and connect with another person on an authentic level.

As the sign that symbolizes balance, Libras care about keeping the peace and avoiding conflicts — so they tend to be talented when it comes to checking the vibe and picking up on social cues. Scorpios are ruled by power-hungry planet Pluto, so they also know how to quietly read a room and gain the upper hand in a situation without drawing too much attention. While their motives may be different, both signs have a sixth sense about people and can see right through a personality façade — especially when they’re working together.

Both Libras and Scorpios tends to be very conscious of how they present themselves to the world, albeit for different reasons. Libras are ruled by Venus (planet of love and beauty), which gives them a strong aesthetic and a desire to be pleasing to others. Meanwhile, stealthy Scorpios are very private people, so they often create an impenetrable persona that keeps others at arm’s length. Combined, Libra-Scorpio cusp sign energy is especially masterful at keeping up a well-curated and controlled appearance, making them a powerful force to be reckoned with.

If you cross a Scorpio, you can expect to get stung by their stinger — but if you’re loyal to them, these fixed zodiac signs will fight for you through just about anything. When you blend this energy with that of social and people-pleasing Libra, you end up with some of the best and most trustworthy friends imaginable. Libra’s natural affinity for partnership combined with Scorpio’s steadfast devotion makes Libra-Scorpio cusp signs some of the most dedicated people to have in your corner.

The dichotomy between Libra’s surface-level smoothness and Scorpio’s raw, unfiltered intensity can feel like two opposite ends of a spectrum — but combined, these energies both speak to someone who needs to their time getting to know people before getting too vulnerable. Libras are gifted conversationalists who can find common ground with just about anyone, but they want to build confidence before they move from small talk to real talk. Similarly, sometimes-suspicious Scorpio zodiac signs require deep trust before they bare their souls. While getting to know a Libra-Scorpio cusp takes extra work and patience, they’ll eventually open up and be their true selves.

More like this
The 3 Most Organized Zodiac Signs, According To An Astrologer
By Kristine Fellizar
Here’s Your Daily Horoscope For January 27, 2023
By Mecca Woods
These 4 Zodiac Signs Make The Best Bridesmaids
By Nina Kahn
Andie From 'How To Lose A Guy In 10 Days' Is A Total Gemini
By Nina Kahn
Get Even More From Bustle — Sign Up For The Newsletter
From hair trends to relationship advice, our daily newsletter has everything you need to sound like a person who’s on TikTok, even if you aren’t.