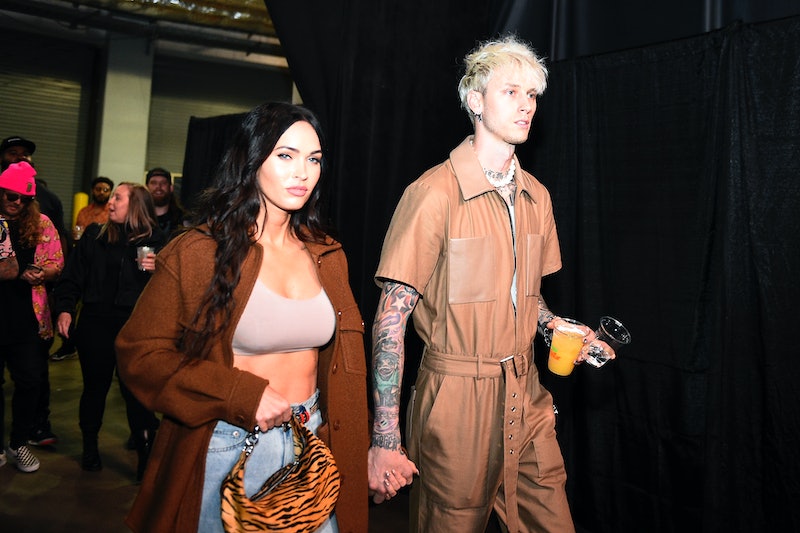 Actor Megan Fox and musician Machine Gun Kelly have dominated headlines with their steamy romance since the spring of 2020, and by the looks of it, they don’t seem to be shy about sharing pieces of their sensual relationship with the world. I mean, have you seen that sexy GQ photoshoot?! Rumors of their romance flooded the Internet for quite some time before the pair confirmed their relationship in the summer of 2020. Today, the couple continues to make waves with interviews and a slew of red carpet looks that suggest the Jennifer’s Body actor and the rapper have a sultry and magnetic connection.

But of course, we can only say so much about the two on the surface. With help from resident astrologer for SoulUnity, Ryan Marquardt, we look to the stars to get a better sense of Megan Fox and Machine Gun Kelly’s astrological compatibility.

Megan Fox (born May 16, 1986) is a Taurus sun that directly mirrors Machine Gun Kelly’s (born April 22, 1990) Taurus sun. Sharing the same sun sign certainly has its perks, since this planet represents vitality and our core being. That’s why the two may relate to each other in key ways like the Taurean need to for consistency and staying grounded.

But it comes with its downsides, including comparing yourself to your partner. “Dating someone who has the same sun sign as you can be disorienting because you easily notice your own negative traits in the other person,” Marquardt tells Bustle. “But if any sun sign can date one of its own, Taurus knows how to make it work,” he adds.

Taurus is a fixed earth sign, meaning they can be stubborn at times and anchored by their personal beliefs. They’re hard-working and super pragmatic, so they’re typically concerned with earthly matters like money, security, and work. “Even though Taurus is a fixed sign that can get stuck in its ways, Taurus Suns tend to be forgiving people. If Megan and MGK experience any personal conflicts with each other, they probably have a healthy way of resolving the issue and keeping each other accountable,” says Marquardt.

On the sexier side of things, Taurus is ruled by Venus, the planet of beauty and love, so it’s a safe bet to assume that intimacy and romance are the cornerstones of their relationship. “When Taureans date each other they tend to keep the relationship simple, pleasurable and grounded. They don’t want complicated situations or unreliable partners,” explains Marquardt. “It’s like Megan and MGK sprouted from the same soil. They see themselves in the other person, including the opportunities for sustainable growth,” he adds.

Although the couple has cosmic chemistry, like all relationships, they do have their differences. Megan’s moon sign is in the self-assured fire sign Leo while MGK’s moon sign is in the dreamy and sensitive water sign Pisces. (Reminder: Our moon sign represents our inner selves, our moods, and our emotional responses.) “A Leo/Pisces lunar connection can clash like fire and water,” explains Marquardt. “Leo moons are active and outward, needing frequent attention and appreciation, especially in public settings. Pisces moons thrive in more private situations where they can have the time to wade in their emotional waters and tap into their vulnerabilities,” he adds.

The two fell hard and fast — pretty on-brand for a brave-hearted Leo and a head-in-the-clouds Pisces, who find it thrilling to go beyond the norm and follow their hearts. While these moon signs share differences in needs — like Leo’s lust for the spotlight and Pisces’ craving for alone time — MGK’s Pisces moon has the power to adapt to Megan’s fiery needs, according to Marquardt.

“Despite the awkward aspect between their moons, fate is certainly playing its hand in Megan and MGK’s relationship. Megan’s moon in Leo is conjunct MGK’s South Node, which indicates a serious past-life connection. The immediate spark they shared is an indicator of familiarity from previous lifetimes,” says Marqardt.

Venusian Friction, But Make It Sexy

With Venus, the planet of romance and love enveloping their sun signs, one can assume that their connection is effortless. But a deeper look into their Venus signs tell a different story. Megan’s Venus sign is stationed in the curious and somewhat detached sign of Gemini, while MGK’s Venus sign orbits in romantic Pisces.

“These placements create a difficult perpendicular angle that often causes stress, but it can also spur breakthroughs. Gemini and Pisces are both mutable signs, so Megan and MGK are down to experiment with their romance, ” explains Marquardt. In astrology, mutable signs are easily adaptable. In relationships, this implies they can adjust to the romantic needs of their partner even if they clash.

“They ultimately want a reliable partner because of the Taurus energy, but their Venus placements give them a lot of flexibility and spontaneity,” Marquardt adds.

Those who have been observing Megan and MGK are dying to know whether the two are truly twin flames. Twin flames are intense spiritual connections that often happen fast, sharing profound chemistry that many can see on the outside. These types of cosmic relationships have a mission of cultivating a positive change in the world. But Megan has already cleared up the burning question for us back in 2020.

“Megan has talked openly about MGK being her ‘twin flame,’” says Marquardt. “This is important! Venus in Gemini gets a terrible reputation for being noncommittal and flaky in relationships. But when a Venus in Gemini is highly evolved, it desperately wants to find its ‘other half’ — because Gemini is the sign of the Twins!”

Those rooting for Megan and MGK can take solace in the idea that their romance is written in the stars. Their astrological synastry reveals a powerful and deep connection that beams from the red carpet.

“Whatever your opinion is on the twin flame connection, one thing is certain: this duo was meant for each other,” says Marquardt. “The harmonious aspects in their birth charts indicate longevity, sincerity, and pleasure. But even the tense aspects appear to have a larger purpose, spanning all the way back to previous lifetimes together.”

While the two have conflicting needs and may experience friction — though what couple doesn’t? — their birth chart shows they have zodiac placements fit for the challenge. After all, twin flames relationships are mirrors of the other: They highlight both the positives and shortcomings of each other so they can grow, adapt, and give the world more of that Venusian love it needs.

More like this
Why Harry Styles & Olivia Wilde Make A Great Couple, According To Astrology
By Nina Kahn
Here’s Your Daily Horoscope For September 26, 2022
By Mecca Woods
This Tarot Card Means It's Time To Reach Your Magical Potential
By Brittany Beringer
Your Horoscope For October 2022
By Alexandria Lettman
Get Even More From Bustle — Sign Up For The Newsletter