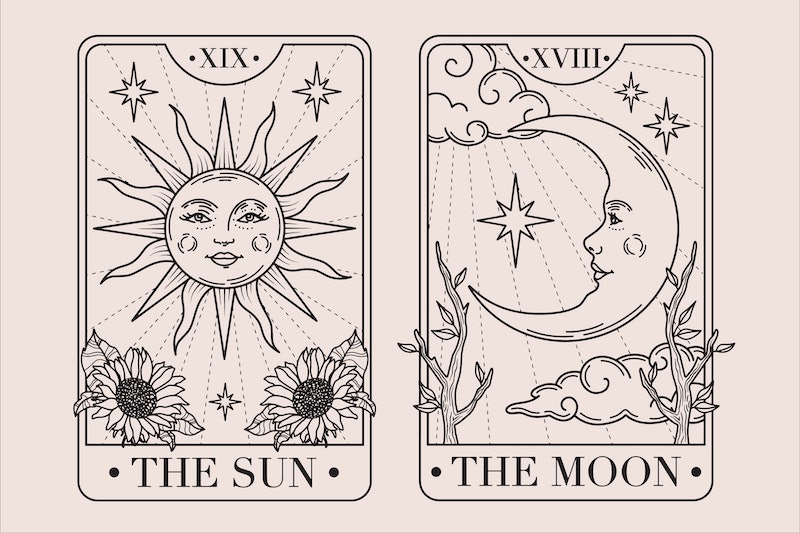 Whether it’s within the realm of astrology, folklore, or science class, the moon has always been an important symbol, and its presence in the tarot is just as powerful. While iconic and recognizable, the Moon card’s meaning is often misunderstood — which is actually quite amusing given that its presence often points to having a lack of clarity in a situation. That said, there are also many other messages that the Moon sends in the tarot that are worth exploring.

If you’re a tarot novice, understanding the basic structure of a tarot deck can help you make sense of the cards individually. A traditional deck includes 78 cards, which are divided into two parts: the major and minor arcana. The Moon is one of the 22 major arcana cards, all of which correspond with broader themes and lessons in our lives. Unlike the 56 cards of the minor arcana, the majors aren’t categorized by suit. Rather, these archetypes represent different phases of our allegorical journey through life. The Moon is card 18, and it’s associated with the dreamy and elusive sign of Pisces. Its meaning is all about navigating the way our subconscious fears, anxieties, and projections can shape the way we perceive things.

“The Moon is a card of mystery and illusion,” tarot reader Sarah Potter, author of The Cosmo Tarot, tells Bustle. “Are you really seeing everything as it is, or are you projecting your own fears and insecurities, swaying your perspective?” When the Moon appears in a tarot spread, it’s important to dig into your subconscious feelings and acknowledge that perhaps not everything is as it seems.

If you’re ready to dive into the deep and mystical meaning of the Moon card in tarot, read on.

What Does The Moon Tarot Card Mean?

Consider what it’s like to look at something in the moonlight. It’s harder to see clearly when it’s dark out, right? The moonlit shadows can distort your perception, and in darkness, your imagination can easily trick you into seeing something that isn’t actually there. Such is the case with the Moon in tarot. This card symbolizes all that is hidden from you in any given situation — whether that’s because those things are lurking in the dark and scorpion-laden waters depicted on the card, or because your intuitive vision is obscured by your own feelings.

While the Moon can certainly highlight the unknown, distorted, or hidden sides of a situation, it’s also associated with themes like dreams, intuition, and subconsciousness — and these can be helpful things to tap into. “This card has the energy of the full moon: It's intense, it's wild, and it has the power to throw us all into a tizzy with total lunacy,” Potter says. “It also [symbolizes] a powerfully charged time to connect with your intuition and magic ... as this card connects us to the realm of our subconscious.”

Overall, the Moon card reminds you that heightened feelings or personal experiences can affect the way you see things and distort your perception. “Everyone might be feeling a little more sensitive and emotional than usual, so not everything is quite as it seems,” Potter says of the card’s presence in a tarot spread. “There is a lot of confusion, and situations may be misconstrued.”

What Does The Moon Card Mean When It’s Upright?

While the Moon has a general meaning in tarot, some readers interpret cards slightly differently based on whether they were pulled upright or upside-down. When the Moon appears in a tarot reading upright, it’s customary to abide by its most straightforward interpretation (although a card’s meaning can also shift based on what other cards appear alongside it in a reading).

“When the Moon appears upright, it signals a divine pause for reflection on your current situation,” Potter says. “Pay attention to what's happening around you, gather more information, and sit with your thoughts a little longer in order to gain some much-needed clarity before making a move.” Because the Moon often highlights illusions and subconscious fears, its presence in a tarot spread asks you to unpack the unconscious biases and emotional influences that are keeping you from seeing things objectively. It’s a reminder of just how easily your judgment and perception can be clouded by your feelings, sensitivities, or even your current mood.

However, the Moon upright can also indicate that you may be missing some pertinent information about the situation at hand, or that certain facts are being shrouded — regardless of your own internal biases or emotional baggage. In either case, there’s likely more to things than meets the eye. “There's a fine line between anxiety and intuition,” Potter says. “Don't do anything rash or make an impulsive decision.” When the Moon shows up, trust that you’re probably not getting a full or accurate portrayal of whatever it is you’re dealing with. Instead of moving forward, take time to reflect on your own feelings and get more perspective on whatever’s happening.

What Does The Moon Card Reversed Mean?

Whenever the Moon card shows up reversed in a reading (assuming you use reversals in your tarot practice), then the interpretation of it may shift. Typically, if a tarot card appears reversed, it’s believed to invert the original meaning somehow or point toward a blockage in the card’s energy. So while the Moon card upright can indicate being overly influenced or confused by your emotions and anxieties, a reversal can be a sign to instead give more credence to your intuitive senses and psychic downloads. “Pay attention to your intuition, and don't talk yourself out of what you are feeling — if everything feels off, it probably is,” Potter says of pulling the Moon card reversed. “When we go against our instincts, that is when we find ourselves in trouble — so trust your inner knowing.”

Because the Moon in tarot often suggests missing information or a lack of clarity in a situation, a reversal of the Moon card can prompt you to search inward in order to find the full story. “Look for cosmic signs from the universe and pay attention to your dreams for the answers you are looking for but cannot find in your waking life,” Potter says. You may subconsciously have the missing pieces you’re seeking in a situation.