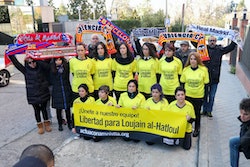 “Undermining of national security” and “attempting to change the political system” are the charges that Loujain al-Hathloul has faced for campaigning against the violation of human rights in Saudi Arabia. Hathloul has been detained in Riyadh along with several other women’s rights activists since 2018, resulting in a global #FreeLoujain campaign on Twitter (and beyond). But who is Loujain al-Hathloul and what is happening with her case now?

Who is Loujain al-Hathloul?

Loujain al-Hathloul is one of the most prominent women’s rights activists from Saudi Arabia, a civil rights activist who has been instrumental in the movement to overturn the driving ban on women and the “wilayah” male guardianship system.

What happened to Loujain al-Hathloul?

In 2018, Hathloul was taken from her bedroom and detained just weeks before Saudi Arabian authorities lifted the driving ban on women. For the first ten months after she was detained, Hathloul was not charged with or tried for any crime. According to Amnesty International, she was waterboarded, given electric shocks, sexually harassed, and was threatened with rape and murder.

In March 2019, Saudi Arabian authorities charged her at Specialised Criminal Court (SCC) for undermining national security and trying to change the political system of the country under the Kingdom’s broad counter-terrorism laws, a Reuters report said. According to the American Bar Association (ABA), the SCC was created to prosecute detainees that had been kept without charge after the 2003 terrorist attacks in Saudi Arabia, claimed by al-Qaeda. Shortly after its creation, however, the SCC was expanded to prosecute “alleged violent extremists to include political dissidents, religious minorities and human rights activists.”

Hathloul was charged under Article 6 of the Anti-Cybercrime law that penalises the production and transmission of material deemed to impinge on public order, religious values, public morals and life.

The Saudi Arabian authorities have repeatedly denied that Hathloul was arrested for campaigning for women to be allowed to drive, but instead for mounting a campaign to undermine the royal family. Campaigners and social commentators have interpreted the arrests as being part of Crown Prince Mohammed bin Salman’s campaign to take credit for lifting the women’s driving ban in June 2018.

Saudi Arabian authorities dropped charges that included Hathloul having been in contact with British, EU and Dutch embassies at the last minute, per the Guardian, possibly because all three are regarded as friendly powers and their involvement in the case might prompt higher levels of protest.

What is the latest news on Loujain al-Hathloul's case?

On Dec. 28, 2020, Hathloul was sentenced to almost six years in jail after being found guilty of spying with foreign parties and conspiring against the kingdom of Saudi Arabia.

Hathloul was sentenced to five years and eight months in jail which she will spend in al-Ha’ir prison in Riyadh, but may be released as soon as March 2021 after the court suspended 34 months of her sentence and backdated the start of her jail term to when she was first detained, in May 2018, meaning she only has three months left to serve.

While the prospect of release has been long-awaited, the news is not reassuring to Hathloul and her family. Her sister, Lina al-Hathloul, who has been tirelessly campaigning for Loujain’s release for the 958 days she has been unjustly detained, said on Twitter: “Loujain cried when she heard the sentence today. After nearly 3 years of arbitrary detention, torture, solitary confinement – they now sentence her and label her a terrorist.”

Loujain will appeal the sentence and ask for another investigation regarding torture, her sister added, but the prosecutor is also able to appeal the ruling. Lina wrote in another tweet that, although the ruling meant her sister could be released in March 2021, she was also subject to a five-year travel ban. Per the Guardian, Hathloul’s suspended jail time is also dependent on her not repeating any of the offences over the next three years, a condition that would put a block on her freedom of speech if she is required to stay in Saudi Arabia under the travel-ban.

What can I do from the UK?

While news of Hathloul's release is a relief, she and her family still have a long way to go in securing justice. And Hathloul is not the only women's rights activist in Saudi Arabia who is facing mistreatment and detainment; Grant Liberty, a non-profit human rights organisation, is aware of at least nine other women’s rights activists currently in prison for the same, or similar, reasons to Hathloul. Staying up-to-date with the fight for human rights in Saudi Arabia is one big way to help from afar.

Here are some other ways to help: