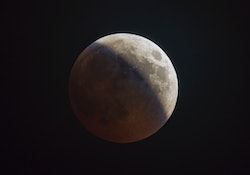 Of all the regularly occurring cosmic events in the calendar, eclipses put on the most dramatic shows. Seeing a “ring of fire” in the sky during a solar eclipse or an eerie red-faced moon during a lunar eclipse is an unforgettable experience — but these phenomena are more than just astronomical spectacles. Astrologically, eclipses are powerful shaker-uppers that relate to themes like fate and destiny. Understanding what eclipses mean in astrology can help you relate to and work with these special celestial moments in a more significant way.

In astrology, eclipses are known for being major harbingers of change. They bring fast-paced shifts, shocking revelations, sudden endings, and swift new beginnings to people’s lives. The events that seem to coincide with these unpredictable lunations can be dizzying, which is why they have a reputation for being chaotic and intense. But in spite of that, eclipses also serve as important cosmic interventions that help to align us with our true paths and connect us with our spiritual destinies. The shifts that occur during eclipse are believed by any astrologers to be of a fated nature — meaning, everything that happens would have happened anyway, but the power of the eclipses allow things to unfold more quickly.

What Is An Eclipse?

By definition, an eclipse occurs when one celestial body obscures the light from or to another celestial body. When we talk about eclipses, we’re referring specifically to the placements of the sun, Earth, and moon, which align several times a year to form both solar eclipses or lunar eclipses. Eclipses take place when either a new or full moon aligns perfectly with the ecliptic, which is the sun’s apparent path through the sky. Lunar eclipses happen when the Earth aligns exactly between the sun and moon, blocking the light going from the sun to the moon (and these always coincide with a full moon). Conversely, solar eclipses happen when the moon aligns exactly between the Earth and sun, blocking the light going from the sun to Earth (and these always coincide with a new moon). When this happens, the sun, moon, and Earth form a straight line, obscuring the light from either the sun or moon (depending on what kind of eclipse it is). That’s what sets a lunar or solar eclipse apart from a regular new or full moon. It’s also why eclipses can have such a striking visual appearance, if you’re seeing them from the right part of the globe.

Those are the astronomical factors that create an eclipse. In terms of their cosmic meaning, when the sun and moon line up with the Earth to form an eclipse, they’re also aligning with two astrologically significant points on the ecliptic called the North and South nodes, which are also referred to as the “lunar nodes” or the “Nodes of Fate.” These points correspond to matters of destiny, karma, and spiritual purpose, so that’s why in astrology, eclipses relate to these themes, too.

How Often Do Eclipses Happen?

Eclipses happen anywhere between four to six times per year, and they arrive in back-to-back pairs. One always occurs on a full moon, and the other happens on a new moon. Occasionally, we’ll even have three eclipses in a row. When we enter a period that’s marked by a pair (or trio) of eclipses, we call that an “eclipse season,” and we usually have two of these periods per year.

While eclipse seasons happen about every six months, these eclipses are actually part of longer cycle known as an eclipse series. During an eclipse series, eclipses continuously take place on a single "axis" of the zodiac wheel, which consists of two opposing signs (like Cancer and Capricorn, for example). Eclipses will keep occurring in this same set of zodiac signs for about two years at a time, and sometimes eclipse series will temporarily overlap. The signs in which any given eclipse series take place within always correspond to the current zodiacal location of the North and South nodes. This means that every time the lunar nodes move into a new set of zodiac signs (which occurs approximately every year and a half), we’ll be in the midst of wrapping up one eclipse cycle and transitioning into a new one. The general themes of each eclipse cycle will also correspond to the themes of the zodiac axis on which it’s taking place. The April 2022 new moon solar eclipse, for example, takes place in bullish Taurus, the zodiac sign that rules values and material possessions. You might expect how you feel about these themes to change during this time. The following full moon lunar eclipse takes place in Machiavellian Scorpio, Taurus’ opposite on the zodiac, and you might expect to change how you feel about power and control.

When we enter an eclipse season, we should be prepared for things to get raw and real, as these periods can usher in loads of big life changes and emotional realizations. Some astrologers believe that eclipses hold the power of multiple new or full moons wrapped up in one, which is why things tend to shift so rapidly during these periods. Solar eclipses often align with exciting new beginnings, twists of fate, and the arrival of unexpected updates. Lunar eclipses, on the other hand, are more likely to bring about sudden endings, conclusions, or powerful changes of heart. Either way, the fast-paced events of an eclipse — however rocky and disorienting — help us to let go of what’s no longer serving us and embrace the truth, which allows us to move forward in a more spiritually aligned way.

Because eclipses are known for being chaotic and change-filled periods in astrology, they’re also not a good time for the moon rituals, manifestations, or moonlight crystal charging sessions that we might do during a regular new or full moon. Eclipse energy can be volatile and unstable, as it tends to shake things up quickly. Instead of trying to set our own intentions during these periods, it’s best to simply listen to the universe and stay open to the realizations and events that are unfolding in your life. Everything happens for a reason during eclipse season, so pay attention to what comes up.

While eclipses can certainly be periods of turmoil, they’re not to be feared or dreaded. Rapid growth always comes with growing pains — and after we complete any given eclipse cycle, we’ll find that we’ve come out the other side much stronger and more aware.

More like this
The Temperance Tarot Card Wants You To Connect With Yourself
By Kristine Fellizar
The Fool Tarot Card Meaning, Explained
By Nina Kahn
The Law Of Assumption Manifestation Method, Explained
By Brittany Beringer
The Spiritual Meaning Of The September 2022 New Moon
By Nina Kahn
Get Even More From Bustle — Sign Up For The Newsletter

This article was originally published on November 15, 2021