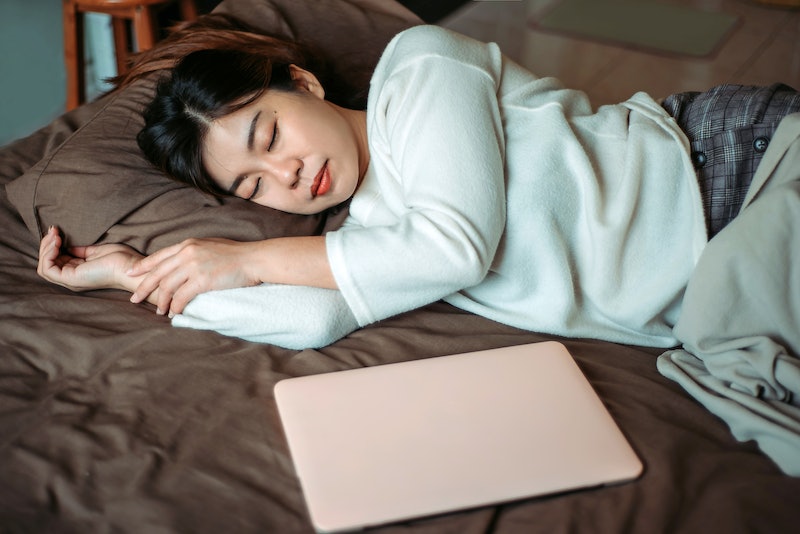 Squid Game is the type of show that sticks with you long after the credits roll. It’s tense, it’s thought-provoking, and on top of that, it’s super gory. If you just watched all nine episodes, Squid Game dreams may be bringing the spooky elements of the series to your mind even while you sleep — which would certainly leave you wondering what it all means.

If you fall asleep watching Squid Game and then have a weird dream about one of the actual games — like tug of war or red light, green light — it doesn’t necessarily mean you’re about to face a life or death situation like the characters on the show, says professional dream analyst Lauri Loewenberg. “We tend to dream at night about what affected us the most during the day,” she tells Bustle. “So if you watch a scary TV show and it’s on your mind as you drift off, odds are very good that images and emotions from the movie will permeate your dreams.”

Read more: What Do Dreams About Cats Mean? Here's What Experts Say

Regardless of what they’re about, the vivid dreams that occur right when you fall asleep are considered “house cleaning” dreams, Loewenberg explains, meaning they’re the brain’s way of clearing out useless clutter to make way for deeper, more meaningful dreams that happen later on in the night. It’s these later dreams (and yes, nightmares) that are worth analyzing.

“Remember, dreams are messages from you, to you, about you, in order to improve you, especially the scary ones,” Loewenberg says. “[In fact,] the more disturbing the dream, the more important the message.” And that’s where the Netflix show comes in: While dream analysis is personal and subjective, here are a few Squid Game dream interpretations to help you figure it all out.

Dreams About Being A Contestant On Squid Game

If you’re dreaming about being in Squid Game, it could be a sign that you relate, in some way, to the stressful situation the characters are in. “Our dreams allow us to deeply examine our current life, struggles, goals, relationships, and behaviors,” Loewenberg says. “And they will often bring pop culture elements in to give us a comparison so we can see things differently so we can gain a better understanding of ourselves.”

Are you going through a financial struggle? Family problem? Relationship issue? “You should ask yourself what part of your life — in some way — mirrors the show,” she says. “Where in your life do you feel like you are being unfairly tested?”

According to Inbaal Hongigman, a mystic and dream expert with MattressNextDay, dreaming about being a contestant on the show could also point to your underlying desire to “win” at something in life.

If you have a general dream about wearing a teal tracksuit and running around Squid Game, it could reveal that you're feeling side-lined and so you'd like your chance in the limelight, Hongigman tells Bustle. “A high-octane game show like Squid Game, however, shows how high the stakes are.” To interpret this type of dream, consider if there’s something you really want that you aren’t going after.

Loewenberg says the rules and nature of each game featured in Squid Game may resonate with a certain area of your life. If you dream about red light, green light, it could indicate that something is starting and stopping. Are you in a relationship that is like that? Is someone playing “head games” with you? Are you working on a project that you keep starting but can't finish? Loewenberg suggests considering how the theme applies to you.

These dreams could also point to a sense that you have to sneak around. “The red light, green light game in a dream is very much like the Grandma's Footsteps,” Hongigman says. “It shows that stealth and silence will get you to where you want.”

Dreams About Tug Of War

Since dreaming about tug of war might point to the dynamic of one of your relationships, Loewenberg suggests thinking about any power struggles you’re currently experiencing, whether it’s with a family member, partner, or coworker. And if this interpretation rings true, lean into the meaning a bit more.

“Dreams often serve as a dress rehearsal and can provide direction you can take into your real life,” she says. “There was an interesting strategy used in the Squid Game that allowed the lead character's team to win. If you are dreaming of that tug of war scene, examine it closely and see how you can apply the same strategy of giving in order to get in your life.”

Dreaming about the tug of war scene might also indicate that you’re being pulled in two different directions, possibly between two important choices. “It shows that you are experiencing an internal struggle, trying to decide the best course of action for yourself,” Hongigman says. “Dreaming of winning this game shows you've already got the answer, and you just need to act on it.”

There are lots of heights and levels featured in Squid Game. In tug of war, for instance, the players literally fall to their demise after being pulled off a ledge. There’s also the glass stepping stone game, where players have to leap their way across a platform hundreds of feet in the air.

“If you have the fear of falling off the platform in this dream, like in the game, there may be something going on in your real life where you feel you are teetering on the edge,” Loewenberg says. “Do a mental health check on yourself. Do you feel you are on the verge of ‘falling’ into a depression? Or is there something else that is on the verge of going in the wrong direction?”

Dreaming about being a contestant is one thing, but dreaming about actually winning Squid Game is something else entirely. “These dreams might mean you're willing to take a massive risk in life because you're certain that you are in the right, and you know you will be proved correct if given a chance,” Hongigman says.

It could also be connected to an accomplishment you recently had — in the show’s context, however, a word of caution: “With Squid Game, the win comes with a huge amount of loss, so you should ask yourself if a recent accomplishment in your real life was worth it,” Loewenberg says.

Now, let’s say you dream about actual squids. While the animal isn’t related to the TV show, except in name, the image of it might sneak into your mind and reveal something buried in your brain. “First, the many tentacles of the squid could show a desire to control a situation or control someone else,” Hongigman says. Think about meddling or getting your fingers into something you shouldn’t.

Then there’s the water element. “As an underwater creature, the symbolism of water as emotion would portray a squid in a dream as ruled entirely by emotion, someone who can only make decisions with their heart, not their head,” she says. So, have you been emotional lately, possibly because you’re going through a tough time? Consider how these dream interpretations apply to your waking life, and you might be able to get to the bottom of all your strange Squid Game dreams.