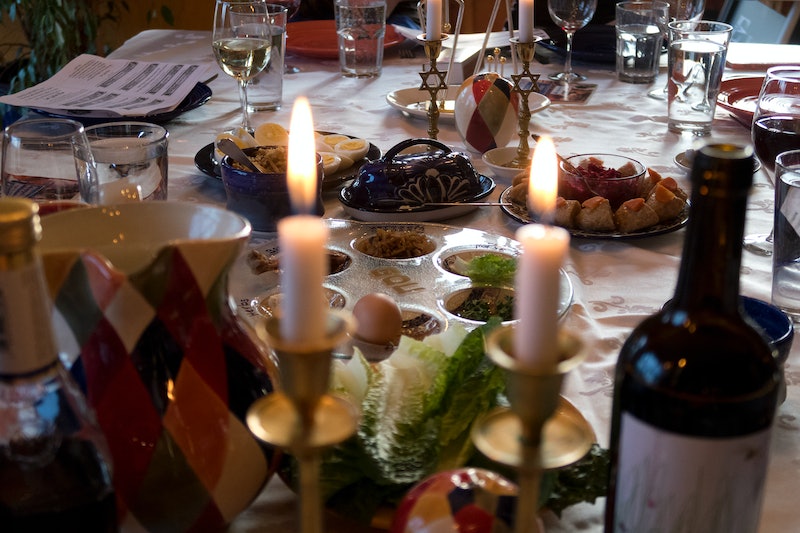 Just because Passover is coming doesn't mean you have to give up your favorite adult beverages for eight days. So, what alcohol is kosher for Passover? Follow this quick and easy guide for what you need to know about kosher alcohol, and make your seder just as memorable as any spring festival.

The most important question to ask yourself when unsure of any alcohol's pareve status is, "Is this made with wheat, barley, spelt, rye, or oat?" Doing a few seconds of internet research can pay off in the long run when you're enjoying vodka sodas per usual instead of begrudgingly begging the bartender for Manischewitz on a Wednesday.

If you're partaking in Passover’s events, it's never a bad idea to refresh your memory on the history of Passover, either. It's a celebration of the Israelites' liberation from Egypt, and as every religious holiday necessitates, there is a certain amount of reverence that should be given to Passover's origins. Once you commune with your roots, it's time to turn toward the most comforting and enjoyable part of any social gathering: the food, drink, and conversation.

With your memory freshly jogged on the reason for the season, it's time to grab a kosher beverage and enjoy the evening. Follow along this list of alcohol kosher for Passover and stay within religious guidelines while turning up for Passover 2022.

Your safest bet for Passover Seder is always wine. Traditionally, those present are expected to drink four cups. Because wine is made from fermented grapes and not fermented grains, it's usually a go. To exercise extra caution, check the bottles to make sure it is mevushal, or kosher for Passover. The label will will let you know which wines are definitely kosher.

Made from agave, regular or white tequila is the recommended option for those keeping kosher. The aging process necessitated by other types of tequila, like gold or reposado, calls into question its pareve status for some. There are certain tequilas that are kosher for Passover, including Patron Silver and Mezcal Amaras Cupreata, but you can see a comprehensive list from The Supervisores en Calidad Kosher of Mexico on tequilas that are kosher for Passover here.

All domestic vodkas produced from 100% neutral grain spirits are kosher, while imported selections require certification. As for vodkas that are kosher for Passover? If it's potato-based instead of wheat, you should be fine.

You’ll want to look for certification before cracking open a hard seltzer. It’s a bit of a toss-up whether a given seltzer is made with any wheat, rye, or barely, and it really depends on the brand. While White Claw is not kosher certified, Vizzy Hard Seltzer is kosher, and so is Coors Seltzer.

Any beer made with wheat, barley, spelt, rye, or oat is not kosher for Passover. Unfortunately, this makes up the majority of the beer market. But don’t worry — if cracking open a cold one during Passover sounds irresistible, there are some options out there. Companies like Boulevard Brewing Co. and Matt Brewing Co. make a number of certified kosher beers.

Because many Jews abstain from consuming anything that contains fermented or leavened grain, bourbon is usually off the table during Passover. Bourbon is, by definition, produced from at least 51% maize, and the rest is some form of grain, like rye, barley, oats, or wheat.

Scotch can either be single or double malt. Regardless of the type, if the scotch is listed as having been aged in sherry casks, then it’s not recommended. You should also check the label and avoid anything that says double or triple finish or matured, dual casks or finish, European or French casks, Madeira finish, port, sauterne, sherry, or other wine casks.

Blended whiskeys need to have certification. Check with your rabbi if shots are the order of the day. A few popular certified kosher whiskeys include Jack Daniel’s Black Label, Gentleman Jack, Old Number 27 and 37, and Single Barrel.

Rum generally requires certification to be considered kosher. Unflavored rum is generally recommended, but keep an eye on the label for any wording suggesting it was finished or aged in wine casks.

If you're keeping kosher and have any questions, consult your rabbi. L'chaim!

More like this
10 Pumpkin Recipes That Are Way More Creative Than Pie & Lattes
By Rebecca Deczynski and Alexis Morillo
10 Stranger Things-Inspired Halloween Costumes For True Fans
By Emma Carey
6 'Game Of Thrones' Halloween Costumes That Aren't Overdone
By Nina Kahn
64 Genius Gift Ideas For Every Single Guy In Your Life
By Teresa Newsome, Mia Mercado and Brittany Leitner
Get Even More From Bustle — Sign Up For The Newsletter

This article was originally published on April 22, 2016