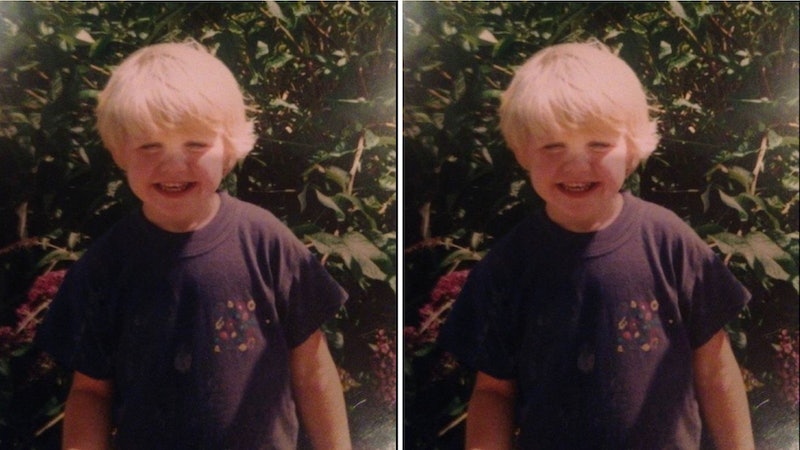 Having a big family is a really amazing thing that not many people get the joy to experience. However, a whole lot of people means a whole lot of personalities — and everyone knows that having the same blood does not mean you actually are in any way alike. But wait one second. Imagine that all your siblings had one thing in common that you didn't: their gender. I grew up with four brothers, and let me tell you, it's been a journey, and it's been real.

The reaction from most women when you mention having only male siblings is usually that sort of inhale through the teeth that builders do when you show them a potential leak in your property. Add to that being the only queer in the family, and you may get an inhale so intense that a front tooth threatens to come loose. Occasionally you'll get questions and comments (generally from people you don't actually know very well) such as, "Oh that's why you're gay." (This used to be like red rag to a bull, but now it just induces a momentous eye roll.)

Imagine that all your siblings had one thing in common that you didn't: their gender.

Being the only girl has been, in some ways, pretty lonely. Not devoid of love or support — quite the opposite, actually. I'm very lucky to have a lovely, kind family. But, in terms of my siblings, there lacks a distinct type of empathy that one may experience more freely from a sibling of the same gender.

Growing up, I possessed a deep yearning to fit in with my brothers, desperately reaching to find common ground or pretending to be interested in stuff I just wasn't. However, at the same time, I wanted so much to stand out on my own as a strong, female person. Like the pendulum of a grandfather clock, I swung endlessly between doing what made my life easier and doing what made me happy — and never really reaching a middle ground. Forever stuck in a world of extremes and knowing no matter what, I'll never be one of the lads.

This leads to a sense of longing for a big sister to answer the kind of questions you're embarrassed to ask older female relatives. Stupid questions relating to intimate things (let's be real, I mean your bits), friendship advice, or how to shave your legs without ending up in a "death by a thousand cuts"-type situation. Or you long for a younger sister to mould into your very best pal, to be always have on your side, and to help develop the same tastes in constructed reality TV as you.

When you're the only girl, you imagine a fairytale vision of sisterly love that, in reality, nobody actually has. (Because let's be real: no matter what gender your siblings are, you always end up driving each other full cray.) But that doesn't mean the longing isn't there.

When you're the only girl, you imagine a fairytale vision of sisterly love.

As well as the small stuff, there are a heck of a lot of niggling and super grim parts of being female that I wish I had a sister to talk to about, or to have warn me of what was to come. How can you expect someone to understand what it is like being treated badly by an employer of the opposite sex because they don't find you sexually attractive without a little guidance? And who's going to talk to you about the experience of unwanted advances from a taxi driver, in a moving car, that you cannot get out of? And what about discussing the best way to hold your keys in your hand on your walk home just in case? Those are the kind of things that you want to prepare yourself for before they happen, but I had to learn the hard way.

In my experience, sharing the daily struggles women face to a group of men can lead to them thinking you have an anti-men (rather of pro-equality) stance. It becomes an insult, a slight. In trying to engage allies, you actually end up isolating yourself even further. It becomes less and less about what you were actually discussing and more and more about how wrong and stupid you are. Silly little girl. And these discussion become increasingly difficult as the silly little girl becomes a silly little woman who is fairly sick of the nonsense in this world.

In trying to engage allies, you actually end up isolating yourself even further.

Having said all that, growing up with only brothers has also been a wonderful, and enlightening, experience. One thing I have definitely gained from it is a pretty deep understanding of men — a kind of understanding that some of my female pals simply don't have. (To the extent that several pals will ask me to vet their new beaus and — whether they listen to my advice or not — I tend to be able to suss a good-un or, erm, not so good-un with, dare I toot my own horn, a fairly perfect track record.)

Something I try to remember is that a number of life's difficulties are genderless: mental health issues, financial woes, and physical health, to name a few. There is room for discussion between all of us here.

I try to remember is that a number of life's difficulties are genderless.

When it comes to discussions surrounding gendered, feminist issues, I think that a lot needs to be done on both sides of the debate for us to achieve any meaningful progress. More so on the side of men, of course. They need to listen to women, to believe their stories, and to do all they can to elevate women in society. However, the rhetoric that "men are the source of all the world's problems" is getting us nowhere, and it's not one I adhere to. I think there are nuances to uncover in this debate, and that will only happen if we actually talk to one another. I know not everyone will agree but, hey, that's just the opinion this only girl.

The main thing above all that I have learned growing up with only brothers is that we all need to begin to find things that bring us together, rather than set us apart. And we need to listen to one another. In my experience, when everyone is shouting, nobody is heard.