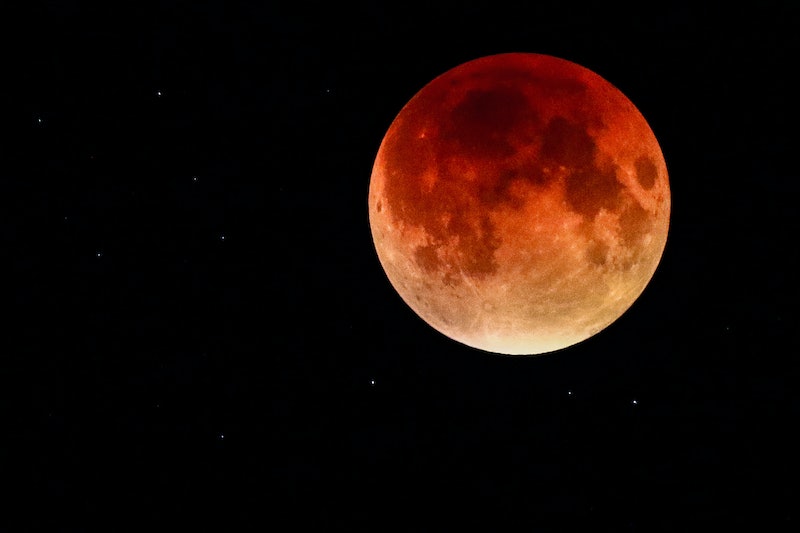 Full moons have long earned a reputation for being a period of high tension, release, and chaos. And as if the power of the full moon isn’t fierce enough, lunar eclipses, which happen when the moon passes through earth’s shadow, hold a unique surge of energy that bolsters the emotional drama. Eclipses give the moon a reddish hue and can only occur during a full moon. This lunar affair occurs about one to three times a year or sometimes less. With the November 2021 full Beaver moon on Nov. 19 being a partial lunar eclipse, both the astrologically-inclined and those less so are preparing to watch this lunation.

In astrology, eclipses are centered around the art of letting go. It’s a time to go inward and release the parts of ourselves that might be holding us back from fully realizing our needs, desires, and passions. In order to get the most out of the lessons of a lunar eclipse, you may want to understand what an eclipse is. Typically, full moons beam a bright light on situations and personal matters that are otherwise kept in the dark, and during a lunar eclipse, you may see that tenfold as you come to head with revelations that can change the course of your work, career, love, or spirituality.

What Is A Lunar Eclipse?

Basically, a lunar eclipse has different stages it moves through. A total lunar eclipse is the most visible and straightforward phase, as you can see shades of red and orange radiating off the moon. A partial lunar eclipse, like November’s full moon, will look like a typical full moon but will be partially overshadowed. The earth casts the slightest shadow during a penumbral eclipse, making it the least noticeable.

Is It Safe To Look At A Lunar Eclipse?

Unlike with a solar eclipse, you don’t need special glasses to look at a lunar eclipse. It’s totally safe to view with the naked eye according to the American Academy of Ophthalmology. Unlike the solar eclipse, which can cause serious long-term damage to your eyes, the moon doesn’t reflect any light rays that can be harmful to your retinas in the same way the sun does. So you can enjoy the beauty of a lunar eclipse from your backyard.

How To Watch The November Full Moon Eclipse

Per NASA, the November full moon partial lunar eclipse should be visible from most of the planet, at least for a bit. In the U.S., east coasters will be able to see it starting at 2 a.m., and it’ll reach its maximum coverage at 4 a.m. West coasters will be able to see it at a slightly more humane time, three hours earlier. Per Inverse, the November full moon will be the longest eclipse of the century, at three hours and change, so you’ll have plenty of time to catch it. Not in a place where you can view the lunar eclipse? You can also stream the event online.

The Astrological Meaning Of A Lunar Eclipse

Although an eclipse occurs in earth’s dark shadow, by no means does its astrological significance lessen. On the contrary, eclipse energy has all the inner workings of a full moon, but even more so — they add an extra dose of cosmic drama to your evening.

“During eclipse season, we undergo an immense transformation,” astrologer MaKayla, aka the StarryEyedMystic, tells Bustle. “It's a time to surrender to the cycles of our life, remain open-minded to change, and to reflect.” With all of these uncomfortable changes in the air, you can imagine the tension it can cause within and around us.

Traditionally, a full moon serves as an ideal time to cast your manifestation ritual. But according to McRae, the chaotic energy of the lunar eclipse makes it a bad time to do so. “Manifesting during a lunar eclipse can be a spell for disaster. Things that start during this time are usually temporary, fleeting, unstable, and erratic. This is a time to maintain what has already been started prior and to release what no longer serves,” explains McRae. Better to stick to personal reflection rather than taking action.