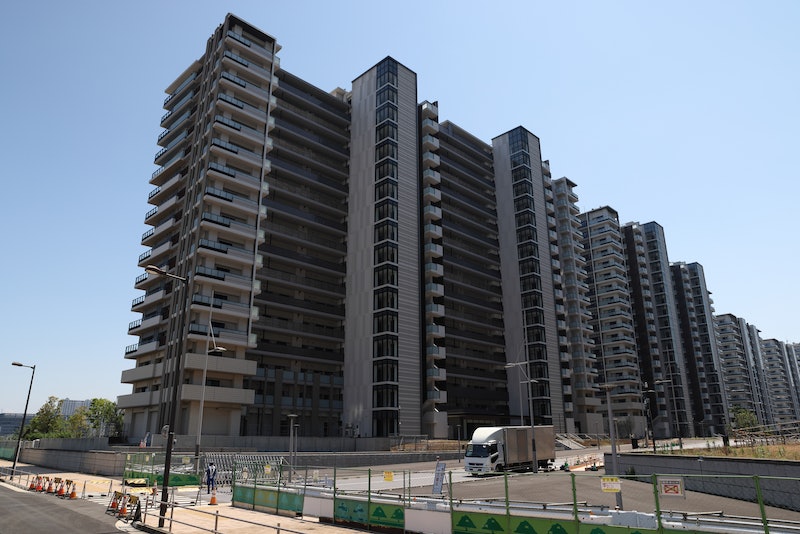 ICYMI in years’ past, there’s much more action to the Olympics than you’ll see on TV. During the 2016 Olympics in Rio, condom brands bragged about how many prophylactics they pumped inside the village, dating apps released record stats about usership surging, and athletes were shameless on Twitter about their after their after-hours workouts.

The games got so heated, the Brazilian government famously handed out 9 million free condoms, with 450,000 condoms given directly to athletes and staff in the Olympic Village. (100,000 of which are internal or “female condoms,” that can be inserted anally or vaginally.) The numbers were a steep incline from the 150,000 condoms handed out in the London Olympics in 2012.

While this may sound like a modern trend, the Olympics began giving out free condoms in 1988, to raise awareness and reduce the spread of HIV. Since then, condom brands have stocked the Olympic Village in an unofficial capacity (for the 2012 Games in London, it was Durex, for example) and then rely on social media to spread the word.

According to the World Health Organization (WHO), only 8% of Japan is fully vaccinated. In efforts to keep everyone safe, officials are urging athletes, trainers, journalists, and others in the Olympic Village to keep to themselves for the duration of the games, noting that this year’s 160,000 free condoms will be handed out goody bag style — upon exit.

Needless to say, in wake of COVID-19, the debauchery of the Olympics is looking a little different. Nevertheless, here's what else we know about sex in the Olympic Village this year.

1. The Beds In The Olympic Village Are Small

When you think of world-class athletes going at it, you probably picture lots of throwing, moving, and upside-down positions. With beds like these, athletes probably have to get creative. According to NBC News, the Olympic Village will host the athletes on 18,000 single beds made of heavy-duty recyclable cardboard, as part of Japan’s sustainably movement. The athletes will be housed across 21 apartment towers, with strict rules about common spaces and going into other buildings and rooms.

On June, 15 The International Olympic Committee (IOC) and International Paralympic Committee (IPC) released the third and final edition of the Tokyo 2020 Playbook, encouraging athletes to “keep physical interactions with others to a minimum” and “avoid physical contact, including hugs and handshakes.” According to the playbook, failure to comply may result in fines, disqualification, metal stripping, and for serial offenses, deportation. Athletes will be assigned COVID-19 Liaison Officer (CLO) for support and regulation during the games. They need to make a list of the people they will be in contact with while in Japan, (like coaches, their roommate, and immediate team members) and will have to share their list with their CLO.

Security in the Olympic Village is super tight to protect the athletes and keep them focused on their events without distraction from the media — or their parents. It's frequently described as having a "first day of camp" or "first day of college" vibe, which obviously lends itself to seizing a rare moment of freedom.

Yet, this year is stricter than ever. Dining halls and common areas are at limited capacity, and athletes are urged not to spend too much time with each other. In addition to rules within the Village, athletes aren’t allowed to eat out, use public transit, or sightsee in Japan.

3. Expect Dating Apps To Pop Off

According to CNBC, dating apps in Japan have been on the up and up. In fact, the country saw a 125% increase in dating app usage from 2019 to 2020. With an influx of tourists and Olympic-based travelers, it’s likely this numbers will continue to surge. Dating apps have a strong history with the Olympics. In 2016, the games were dubbed “Raunchy Rio” with Tinder usage increasing 129% in the Olympic Village. And let’s not forget when Grindr fully crashed during the 2012 Games in London.

4. There Are Typically *A Lot* Of Olympic Village Sex Participants

Well, there was. In ESPN's oft-cited exposé on Olympic Village sex in 2016, swimmer Ryan Lochte estimated the number of Olympians who participate at "70 to 75 percent." (For perspective, 47.62% of the U.S. is fully vaccinated, according to Our World In Data.)

5. Group Sex Happens At The Olympics

Thanks to athletes' competition regimens, they arrive at the Games with a ton of pent-up energy, eating 9,000 calories a day, and then coasting on endorphins and adrenaline when they compete. According to Dr. Uchenna "UC" Ossai, pelvic health physical therapist and sex educator, Olympic athletes are ready to bring it in the bedroom.

“It is widely known that high-level physical performance and fitness have an elevating effect when it comes to overall sexual function,” Dr. Ossai previously told Bustle. "Sexual activity is a truly loyal friend when it comes to mood, pain management, sleep quality, and pelvic floor function.”

While some coaches encourage their team to abstain from X-rated activities during training out of fear it’ll interfere with performance, a 2016 study published in the journal Frontiers in Physiology said there was no scientific evidence to back that up that theory.

This article was originally published on Feb. 6, 2018