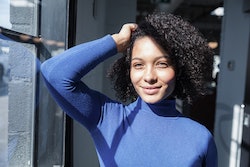 Are you ready for a mini astrology lesson? Today we're talking about what a stellium in astrology means, which is basically just a fancy word indicating that multiple planets are clustered close together in one zodiac sign or astrological house. When we have a bunch of planets coming together in one area of the zodiac, we're more likely to feel an influx of the sign's energy in our lives — and yes, it can be intense. Knowing what a stellium means in astrology and how you can work with the energy can help you take advantage of these sometimes-overwhelming transits.

First things first, each planet in astrology moves through the zodiac at a different pace. For example, the moon switches signs every few days, while the sun switches signs every month. The sun and moon move quickly, but as you move further out into the solar system, the planetary orbits get much longer. Uranus spends about seven years in each zodiac sign, while Pluto spends upwards of 20 to 30. That said, you can see that the odds of having a whole cluster of planets in just one of the 12 signs at once are slim, which makes stelliums a notable astrological event.

What Makes A Stellium In Astrology?

To be considered a stellium, three or more planets must be grouped together in the same zodiac sign (or astrological house, if you're looking at a birth chart). That's because if it's only two, it's probably just a conjunction aspect — which happens pretty frequently.

However, according to many astrologers, if the planetary grouping includes either the sun or the moon, then the number of planets necessary to constitute a stellium goes up to four. This is likely because the sun and moon move relatively quickly through the signs, and therefore align with other planets more regularly than most.

If you were born during a planetary stellium, then your birth chart will reflect that — and the stellium sign's energy will likely be prominent in your personality. In a birth chart, stelliums can also occur when planets are clustered closely together in one astrological house (versus one zodiac sign). In this case, the influx of energy would involve the themes of that house even more so than the zodiac signs involved.

What To Expect From A Stellium

With so many planets bringing their often-clashing personalities to one area of the zodiac, we can expect to feel an influx of that sign's energy, both personally and collectively. This can be a little uncomfortable sometimes, as we may feel overwhelmed by having such a heavy planetary emphasis on just one area of our lives. Other the other hand, it can also be an amazing opportunity to align ourselves with the stellium's zodiac sign energy and learn whatever lessons it has to teach us.

You can also gauge the vibe of a stellium based on the planets that are involved. If there are multiple personal planets present (such as the sun, moon, Mercury, Venus, or Mars), then expect to feel the energy in an intimate way that can affect your personality, mood, and relationships. If the planets involved include the more distant, transpersonal planets (such as Jupiter, Saturn, Uranus, Neptune, or Pluto), then the stellium's energy will likely be expressed in a more collective and overarching manner.

For example, in February 2021, there will be six planets clustered closely together in Aquarius, which puts a huge emphasis on the Aquarian qualities of innovation, progressive thinking, community focus, and tech breakthroughs. Because this stellium involves personal planets (sun, moon, Mercury, and Venus), as well as slower-moving social planets Saturn and Jupiter, the Aquarius vibe will be felt heavily in our day-to-day lives and on a broader collective scale.

How To Work With A Stellium

If there's a stellium happening in the skies, try to embrace the astrological energy of the zodiac sign that it's taking place in and figure out how to best express it in your own life. Look up the planets involved in the stellium and qualities of the zodiac sign they're sharing — then lean into that sign's most productive and positive qualities. For example, if there's a stellium in earth sign Capricorn (as there was in early 2020), then it may be a good time to focus on your career, set super tangible goals, and embrace your more disciplined side.

If you have a stellium in your birth chart, the same thing applies, except it's more personal — and managing the influx of energy in one area of your chart is something that'll be ongoing instead of transitory. You may sometimes feel like there too much emphasis in the area of your life or personality that's related to the stellium's placement. If that's the case, here's a trick: Lean into the opposing sign's energy. Look at the zodiac wheel of your birth chart, and locate the house and sign that's directly opposite to your stellium. Now, look up the qualities of that sign/house and try to find ways to bring more of those vibes into your life. This can help you counteract some of the stellium's overwhelming energy and bring more balance to your astrological make-up.

Whether it's a stellium in your birth chart or just a fleeting moment in the stars, these powerful planetary alignments can bring major breakthroughs if we're willing to align ourselves with their energy.

More like this
These 4 Signs Are The Sarcastic Jokesters Of The Zodiac
By Brittany Beringer
The 3 Most Mature Zodiac Signs
By Brittany Beringer
The 3 Most Family-Oriented Zodiac Signs, According To An Astrologer
By Nina Kahn
Here’s Why Sagittarians Should Pursue A Career In Academia
By Nina Kahn
Get Even More From Bustle — Sign Up For The Newsletter