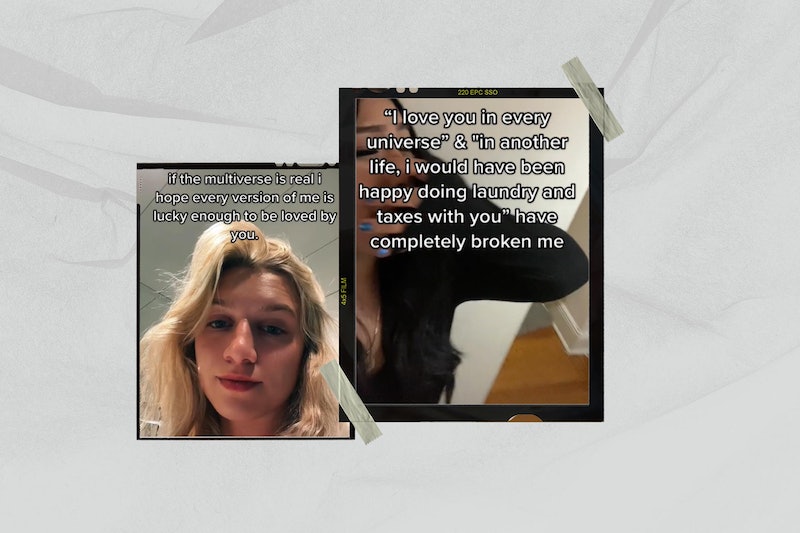 Perhaps the internet’s word of the year thus far? “Multiverse.” On TikTok, the tag #multiverse has more than 2.8 billion views with thousands of videos cracking jokes and shedding tears over the possibilities of lives across universes.

In a theoretical sense, the theory of the multiverse suggests that the universe we inhabit is not the only one that exists, and that an infinity of other universes exist which abide by their own laws of physics and center around their own collections of stars and galaxies. In the commercial sense, the multiverse is a concept largely popularized by the Marvel Cinematic Universe which allows avengers to perish and continue returning for countless sequels.

In popular culture, the multiverse is taking on new meaning beyond costumed science fiction and stunt doubles. For the film crowd, the March 11 release of A24’s Everything Everywhere All At Once made the idea of multiple universes a bit more romantic. The multiverse plot line of the film has led viewers to consider their sense of self across a multiverse and is likely one reason the term has catapulted to popularity online.

In the movie, laundromat owner Evelyn Wang travels throughout a number of alternate universes. She sees herself as a famous movie star, a chef, a woman with hot dog fingers (among other versions of herself), but ultimately finds that the life and universe she knows, complete with family feuds, divorce papers, and IRS audits, is the one she would choose again and again. One specific line from the movie made it big online and sparked sentimental conversations around the concept of a multiverse, “In another life, I would have really liked just doing laundry and taxes with you.”

The multiverse trend spread quickly online, with users taking moments of gratitude and reflection for the beauty of life – a trend more wholesome than TikTok’s usual fodder. Many of the videos in this trend have been paired with a song from artist Stephen Sanchez, titled “Until I Found You.” On TikTok, the song has been used in nearly half a million videos.

One user, @annaxsitar, used the song to share a sweet sentiment in the vein of Everything Everywhere All At Once. Her video, which sits at 4.1M views and more than 600k likes, reads “if the multiverse is real I hope every version of me is lucky enough to be loved by you.”

Another user, @ajclementine, used the trend to share her hopes for a family. Her video, which has more than 817,000 views, reads, “if the multiverse is real i hope there’s a version of me that experienced creating a bby and lives in a cozy lil cottage.”

Other users have found solace in the idea of a multiverse, sharing with the internet their most painful losses of those they hope are still just a phone call away in another life. User @midwestavenger paired the bittersweet song and trend with the memory of his late sister, his post reading, “if the multiverse is real, I hope there’s one where I still have my big sister.” The video has more than 400,000 views, 109,000 likes, and more than 1,000 comments showing support and quoting Wandavision (another multiverse epic) with, “what is grief if not love persevering?”

The reality of a multiverse, like many theories, is up for debate, but online, it is very much real. The conversations happening in the tags of #multiverse are a reminder that if our universe is the only one, it’s best to make it a good one.

More like this
What Does POV Mean On TikTok? The Popular Acronym, Explained
By Emma Carey
Here’s How To Get Verified On TikTok
By Emma Carey
13 Selfie Instagram Caption Ideas That Exude Main Character Energy
By Jessica Booth and Emma Carey
Myra Magdalen Is TikTok’s Queen Of Chaotic Maximalist Fashion
By Sophia Moore
Get Even More From Bustle — Sign Up For The Newsletter