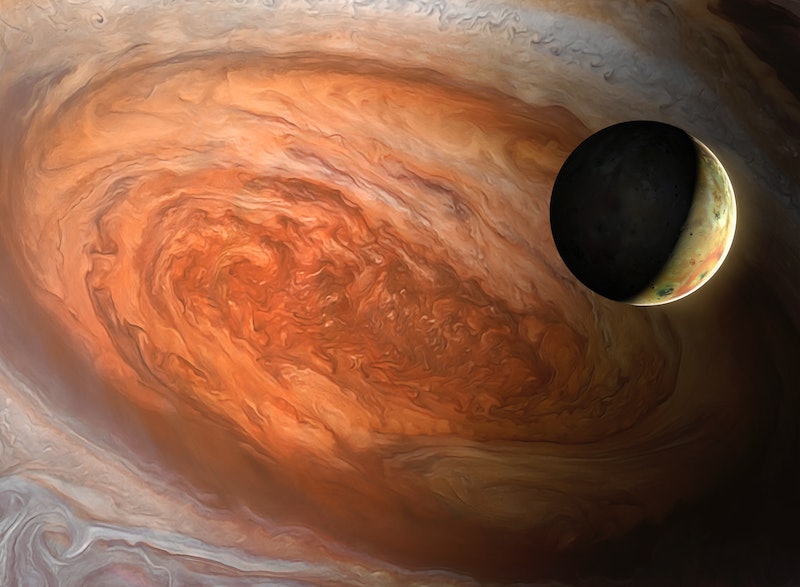 You may know your sun, moon, and rising signs like the back of your hand, but do you know which planets actually preside over these signs? Each zodiac sign has its own planetary “ruler” in astrology, and their energies influence and correspond with the qualities of the signs they rule. When it comes to fun and free-spirited Sagittarius, its ruling planet is the largest planet in the entire solar system — so it’s no wonder that these fire signs are so keen on spreading their wings and exploring new heights.

That’s right: Sagittarius’ ruling planet is the mighty gas giant Jupiter. While some signs are associated with two planetary rulers (one modern and one traditional), Sagittarius is ruled by Jupiter in both ancient and modern-day astrology practices. Jupiter in astrology is all about growth, abundance, and mental expansion. And like its cosmic ruler, Sagittarius zodiac energy aligns perfectly with these themes, too. Sagittarians are known for seeking knowledge, chasing spiritual awakenings, and always staying open to different perspectives.

Even if you’re not a Sagittarius, getting to know this sign’s ruling planet can help you make sense of your own birth chart and the meaning of the zodiac’s archer in a deeper way. Read on to learn more about the ruling planet for Sagittarius.

All About Jupiter, Sagittarius’ Ruling Planet

In astrology, Jupiter is the planet of growth and expansion, of both the mental and spiritual sort. Its knowledge-seeking energy is associated with subjects like philosophy, ethics, and our belief systems — so it encourages us to think big, challenge our personal paradigms, and explore our spirituality. Named after the “King of the Gods” in Roman mythology, Jupiter’s auspicious energy is also associated with abundance and good fortune, hence why it’s considered the luckiest planet in the zodiac.

In traditional astrology, Jupiter was known as the “greater benefic” planet — a nickname that alludes to the slew of benefits that it tends to deliver wherever it travels in the zodiac. While Jupiter’s positive energy can certainly bring us good luck and the ability to level up, it also has a tendency to exaggerate things, which can cause us to dramatize events or overindulge.

Jupiter is considered one of the “social planets,” as it’s located between the inner “personality” planets and the outer “collective” planets. This means that in both our birth charts and day-to-day astrology, Jupiter affects personal values (such as how we form and relate to our belief systems), as well as our more outward relationships with society.

It’s easy to see Jupiter’s influence when looking at Sagittarius’ zodiac traits. Sagittarians love to be on the move and see the world, and they have an insatiable appetite when it comes to learning new things. This makes sense, considering the fact that Jupiter rules things like long-distance travel and higher education. We can also see Jupiter’s optimism in Sagittarius’ happy-go-lucky personality. Sag can easily see the silver lining on any storm cloud, and as the zodiac’s archer, they’re always shooting for the stars. Thanks to good-luck planet Jupiter being on their side, these risk-takers tend to hit their targets.

When planets transit through the signs of the zodiac that they rule, they’re able to express their cosmic attributes more easily and effectively — which can benefit everyone, regardless of their sign. The next time Jupiter will be in its home sign of Sagittarius is from Oct. 22, 2030 through Nov. 15, 2031, so let’s all look forward to experiencing Jupiter’s high-functioning magic for a whole year.

More like this
Here’s Why Sagittarians Should Pursue A Career In Academia
By Nina Kahn
Here’s Your Daily Horoscope For September 26, 2022
By Mecca Woods
This Tarot Card Means It's Time To Reach Your Magical Potential
By Brittany Beringer
Your Horoscope For October 2022
By Alexandria Lettman
Get Even More From Bustle — Sign Up For The Newsletter