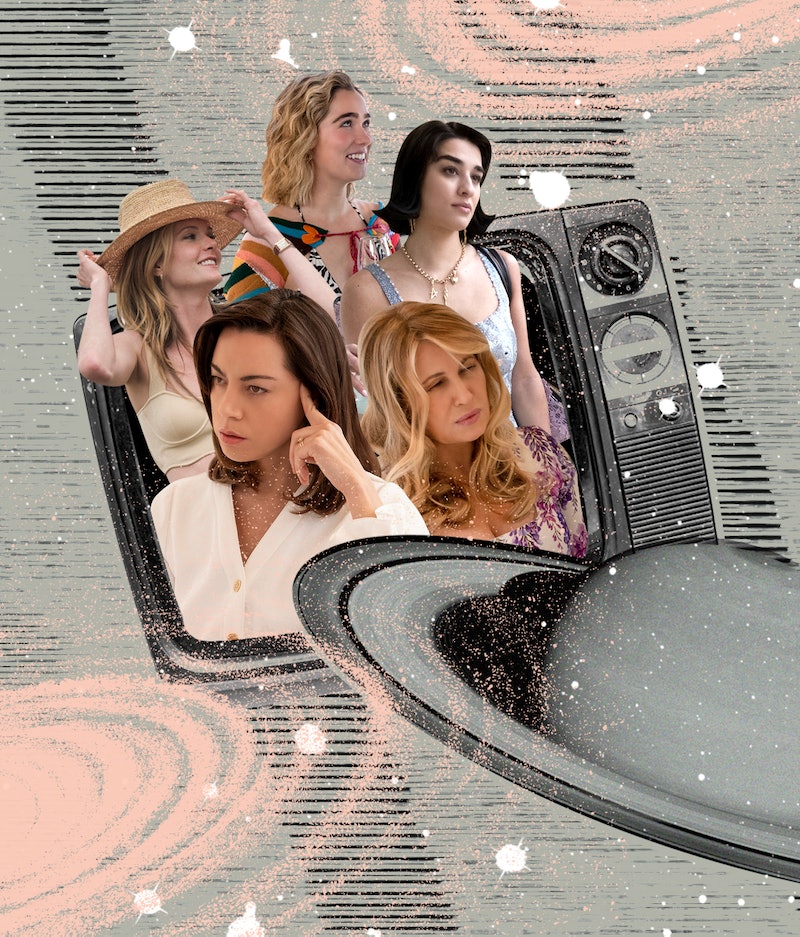 In Astrologically Speaking, astrologers make their case for your favorite characters’ zodiac signs, based on specific scenes, quotes, and even fashion choices. Here, Nina Kahn, author of Astrology for Life and Wander the Stars, explains the possible zodiac signs of the main characters of White Lotus, Season 2. Spoilers for The White Lotus follow.

Sunday nights won’t be nearly as salacious or suspenseful once the Season 2 finale of HBO’s White Lotus airs on Dec. 11. Throughout the season, viewers have followed a complex cast of characters during their week-long vacation in Sicily — all of whom have served up layers of loaded dialogue, juicy secrets, and questionable behaviors to analyze. Naturally, as an astrologer, I’ve also been hypothesizing about each character’s zodiac sign in addition to their motives, and I have a lot to say on the topic.

In case you need a refresher, The White Lotus Season 2 plot follows the relationships, sex lives, and interpersonal dynamics of a group of wealthy vacation-goers (plus a few locals) at an exclusive resort in Sicily called the White Lotus. The witty and tension-filled social satire explores issues such as class, gender, power, sexuality, and race — all set against the backdrop of a luxurious dream vacation. The subtle nuances and shocking twists throughout the season have spawned countless fan theories about what will transpire in its fever-pitch of a finale, but I’m not here to wax fancy on whose body may have been found floating in the ocean back in Episode 1. I’m here to break down what I believe are the most likely zodiac signs of the White Lotus characters.

There may not have any fictional birth certificates for the main characters in White Lotus, Season 2, but some educated guesses can still be made about the astrological influences that help make them who they are. Read on to take a tour through the zodiac signs of some White Lotus favorites.

Tanya Is A Piscean Dreamer

Pisces often prefer the mystical realm of their fantasies over the harshness of reality, and such is definitely true of the sensitive and slightly-loopy Tanya McQuoid. For example, when Tanya notices what appears to be a youthful photo of her husband alongside her new acquaintance Quentin, she continues on with her extramarital hookup without a beat, seemingly pushing this alarming revelation aside in order to stay lost in the moment. Pisces are also known for being intuitive and spiritual, so it makes sense that Tanya would seek out a tarot reader for guidance or theorize that she might be “cursed” by the “witchy” healer from Maui.

Portia Is A Quirky Aquarius

Everything from Portia’s quirky sense of style to her objective and sometimes-disconnected way of relating to the world totally screams Aquarius. Aquarians are known for being a little eccentric and they like to rebel against the status quo. These qualities are seen in Portia as she repeatedly laments the chronically-online nature of modern life and fantasizes about having a relationship with someone who is clueless about “the discourse.” This desire to embrace counter-culture totally aligns with this fixed air sign’s vibe, as does her struggle to live in the moment — Aquarians are always deep in thought about one thing or another!

Jack Is A Sagittarian Party-Animal

“If you want an adventure, stick with me,” Jack tells Portia in Episode 3 like the spontaneity-loving Sagittarius he obviously is. Jack fully embodies the free-spirited and happy-go-lucky energy of a Sagittarius sun sign. Whether it involves gallivanting through the streets of Sicily with a romantic fling, fleeing a restaurant without paying for the arancini, or possibly pretending to be Quentin’s nephew as part of some sort of elaborate scam (that’s a theory, anyway), Jack is always down to get wild and take a risk. Hopefully, he lands on his toes, as these lucky Jupiter-ruled signs are wont to do.

Harper Is A No-Nonsense Capricorn

“We're all entertaining each other while the world burns," Harper says in Episode 1 — spoken like a true Capricorn! This earth sign is ruled by the stern and serious planet Saturn, which makes Harper tough, practical, and a little edgy — and also explains her dark sense of humor and penchant for pessimism. As the star lawyer of her firm with plans to start a nonprofit foundation, she’s clearly ambitious, which is another classic Capricorn quality. True to her business-minded sign, Harper immediately calls that Cameron will likely approach Ethan with some “money-making scheme.” And of course, she’s right, as Capricorns usually are.

Ethan Is A Dependable Taurus

Taurus signs are known for being stable and dependable, and Ethan fully embodies this fixed sign’s energy in his work, his friendships, and his marriage. For example, he appears to have a solid relationship with Harper, and maintains a longtime friendship with Cam, despite not having much in common with him. Ethan’s relatively delayed success at work makes sense, too, given that Tauruses prefer to work at a slow and steady pace. Speaking of success, Harper also notes that Ethan hasn’t changed “at all” since becoming wealthy, and that “he’s exactly the same.” That’s some true Taurus reliability.

Cameron Is A Feisty Aries

Aries are known for being impulsive, assertive, and competitive — and the bold and feisty Cam perfectly exemplifies this fire sign’s vibe. Ruled by warrior planet Mars and symbolized by the ram, Aries can be quite hot-headed and pushy, and this side of Cam comes out when he’s yelling on the phone with the airline that misplaced his luggage and when he’s pressuring Ethan to go along with his plans. Viewers see more of Cam’s Aries-like brazenness when he starts flirting with and making moves on Harper right in front of their significant others.

Daphne Is A Balance-Loving Libra

Diplomatic Daphne gracefully sails past every social snafu and awkward bit of tension throughout the season — and like a true Libra, she does it with a smile on her face. Libra is the sign that rules peace and partnerships, so it makes sense that Daphne chooses to maintain harmony in her marriage despite her awareness of her husband’s infidelity. She may avoid any confrontational moment with her husband, but viewers mustn’t forget that Libras are invested in justice, too. “Do what you have to do to make yourself feel better about [your partner cheating],” she advises Harper in Episode 5. Based on her anecdote about her trainer, it sounds like she’s following her own advice and balancing the scales in her own way.

Lucia Is A Magnetic Leo

Only a Leo can manage to look both glamorous and confident, even while dragging herself through the halls of a hotel in last night’s makeup and party dress. So when it comes to Lucia, there’s no doubt about her fiery zodiac sign status. Leos are fixed signs, so as is seen in Lucia, they’re willing to work hard for their goals and are relentless once they set their mind to something. Lucia’s Leo qualities bestow her with dedication, warmth, optimism, and a taste for drama — and she has an undeniable star power that’s hard to resist.

Albie Is A Sensitive Cancer

Albie’s mother refers to him as a “sweet and sensitive man,” and there couldn’t be a more Cancerian way to describe someone. Soft-hearted Albie is naturally nurturing, emotionally connected, and tries to be supportive to the people around him, just as a Cancer would. However, the cosmic crab is also highly passive-aggressive — they prefer to scurry sideways along the shores of a problem rather than facing it head-on. This quality is seen in Albie when instead of addressing his frustration about Portia’s new fling, he winds up attempting to make her jealous and uncomfortable by kissing Lucia in front of her.

Dominic Is A Brooding Scorpio

Brooding, intense, and full of secrets, Dominic gives off serious Scorpio vibes. Scorpios are known for being dark and mysterious, and Dominic most certainly has some skeletons in his closet. Whether it’s the sex workers he’s attempting to hide from his family or the murky transgressions that have led to the dissolution of his marriage, Dominic is haunted by his secrets at every turn. In modern astrology, Scorpio is sometimes associated with the themes of the eighth house, which include sexuality, shame, and taboos. Dominic appears to struggle with an intersection of all these things, which only amplifies his Scorpio-like energy.

Valentina Is A Leo Leader

White Lotus, Season 2 takes place during the month of July — and because Valentina’s birthday occurs during episode 5, it’s known that she technically has to be either a Cancer or a Leo. My money is on Leo, as Valentina is most certainly the regal and lion-like ruler of the White Lotus. As the resort manager, Valentina is able to show off her Leonian leadership skills as well as her flashy and fabulous pantsuits (Leos pull off eye-catching looks with ease). Flattery can also get you pretty far with a Leo, so it isn’t too surprising that Mia’s sweet-talking finds her on Valentina’s softer side.

More like this
Andie From 'How To Lose A Guy In 10 Days' Is A Total Gemini
By Nina Kahn
These 3 Signs Are The Master Chefs Of The Zodiac
By Kristine Fellizar
These 4 Zodiac Signs Make The Best Bridesmaids
By Nina Kahn
These 3 Zodiac Signs Could Write A Bestselling Novel
By Brittany Beringer
Get Even More From Bustle — Sign Up For The Newsletter
From hair trends to relationship advice, our daily newsletter has everything you need to sound like a person who’s on TikTok, even if you aren’t.