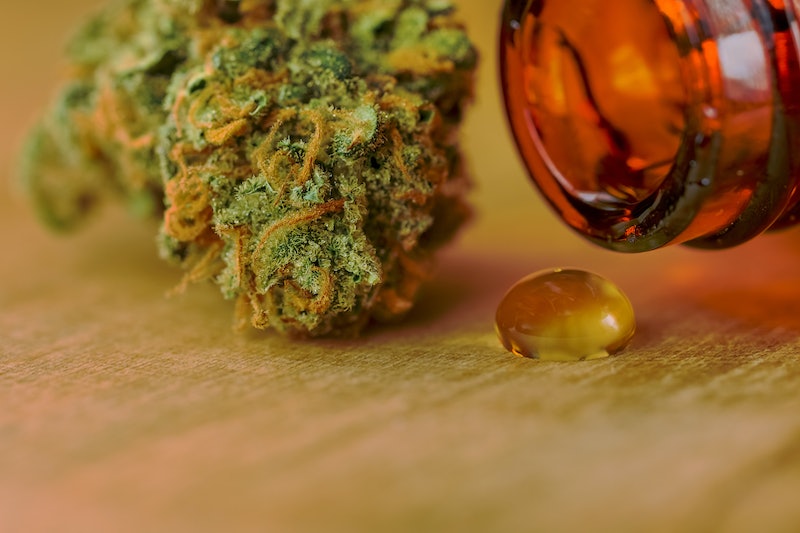 For many people, the way they think of cannabis is influenced by “stoner” culture — so it’s not unnatural if Pineapple Express is the first thing that comes to mind when someone mentions it. But cannabis is a term that encompasses hemp, marijuana, and various chemical compounds, and people sometimes mistake them for one another. Marijuana, aka “weed,” and CBD are, in fact, two very different things.

CBD is usually extracted from hemp, which is defined as cannabis plants that contain less than 0.3 percent THC, according to The Brookings Institution. THC, or tetrahydrocannabinol, is the compound in cannabis that gets you high. By contrast, marijuana usually contains about 12 percent THC on average, according to a study published in the journal Society of Biological Psychiatry.

It’s because of the difference in THC content that marijuana makes you feel different than CBD products do. According to the National Institute on Drug Abuse, smoking, eating, vaping or otherwise consuming marijuana can cause impaired thinking, mood changes, and altered senses. On the other hand, even though CBD comes from cannabis plants, taking it won’t provide the high that comes with using marijuana.

CBD is often taken for pain, anxiety, and depression, according to a study published in the Cannabis and Cannabinoid Research journal. The majority of people involved in the study cited a medical condition as the reason for using CBD, and about 43 percent of those people were aged 55 and older.

While THC can cause paranoia in some people, you’ll probably just feel tired if you take too much CBD, according to Dr. J. H. Atkinson, MD, co-director of the Center for Medicinal Cannabis Research at the University of California, San Diego.

Atkinson notes that a lack of government regulation is one thing the two compounds have in common, and that lack of regulation contributes to consumers’ confusion between CBD and THC. “In studies done by the state of California, it appears that a good deal of product labeling is incorrect — the dose or percentage of CBD or THC is usually overstated,” he tells Bustle. The U.S. Food & Drug Administration (FDA) recently announced plans to hold public hearings and create a working group to explore how to potentially regulate CBD products.

Even though our parents and grandparents are smoking marijuana at high rates, recreational marijuana use remains illegal in all but 10 states, which has a disproportionate effect on people of color. Despite white and black people using marijuana at roughly the same rate, black people are nearly 4 times more likely to be arrested for it, according to the ACLU. Lawmakers in Congress are working to legalize marijuana at the federal level, but that’s likely a long way off.

The legality of CBD, however, has proved to be a gray area despite the fact that the 2018 farm bill legalized the sale and growth of hemp across the country. While the Drug Enforcement Administration says it isn’t interested in prosecuting CBD users, and many states have explicitly legalized CBD, law enforcement agencies are still conducting raids on businesses that sell it in places like Arizona, Iowa, and Nebraska. Since the FDA hasn’t developed regulations for CBD products yet, it can be hard to figure out what’s allowed and what isn’t depending on where you live.

So just remember: Even though CBD and weed both fall under the cannabis umbrella, they are not in any way interchangeable — and they’re governed by very different sets of legal guidelines.

Readers should note that the regulations and data surrounding CBD are still developing. As such, the information contained in this post should not be construed as medical or legal advice. Always consult with your doctor before trying any substance or supplement.