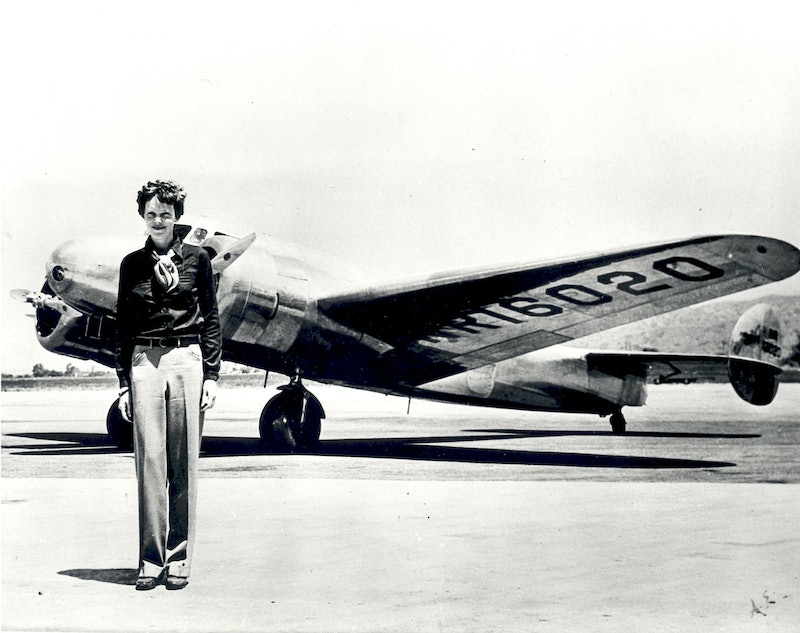 As you may have heard there’s been quite a hullabaloo the past couple of days surrounding a particular historical aviatrix — so now seems like a good time to take a closer look at all the creepy facts surrounding Amelia Earhart’s disappearance. Because believe you me, there’s a lot of ‘em — starting with this newly-discovered photo that might just hint at what actually happened to her. Brace yourselves, lovers of weird history, because everything you think you know about one of the greatest mysteries of all time might be a lie.

Here’s what we know: On July 2, 1937, Earhart and her navigator, Fred Noonan, vanished somewhere over the Pacific Ocean during what was meant to be a round-the-world flight. What we don’t know, however, is what exactly happened to them. They were never found, and they were never heard from again. The prevailing theory is that they ran out of fuel, crashed, and perished — but on Wednesday, in preparation for an upcoming History Channel documentary called Amelia Earhart: The Lost Evidence, a photograph was revealed that might change everything.

The photo, which was found buried deep in the National Archives, is believed to have been taken in 1937. Marked “Jaluit Atoll” — Jaluit Atoll being one of the 29 coral atolls that make up the Marshall Islands— it shows a dock, a group of people, and a ship towing a barge in the background. The ship, believed to be the Japanese vessel Koshu, is pulling something that looks to be about the same size as Earhart’s Lockheed Model 10-E Electra — and two of the people standing on the dock are believed to be Noonan and Earhart herself.

If the photograph shows what people think it shows, then it might be evidence that Earhart and Noonan survived their plane going down — and an indication of what happened to them afterwards. “We believe that the Koshu took her to Saipan, and that she died there under the custody of the Japanese, said Gary Tarpinian, who executive produced Amelia Earhart: The Lost Evidence, to NBC News — which, by the way, is a theory that's existed for quite some time. However, authorities in Japan contacted by NBC News said they have no record of Earhart ever being in Japanese custody.

Personally, I’m not convinced we’re ever really going to know what happened to Earhart and Noonan; either way, though, it’s certainly a fascinating development in the case. It’s far from the only creepy thing about the disappearance, though — these 10 tidbits definitely give me the heebie-jeebies. Anyone else?