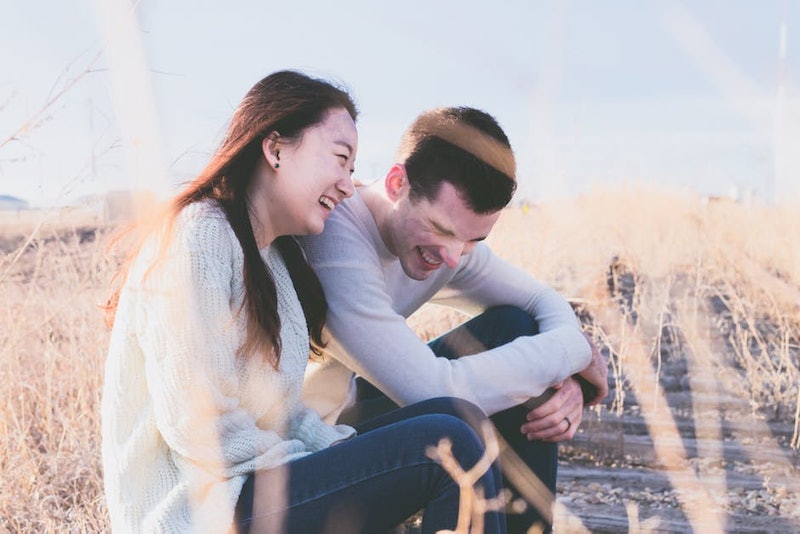 No one wants to be in a difficult relationship, but sometimes it doesn't work out that way. Life is tough, things get rocky, and before long you and your beloved may find yourselves struggling. But that doesn't mean you aren't with the right person. As long as there is mutual respect, and a few other important traits, it's likely you've still got a healthy — and normal — situation on your hands.

As life coach and author Jaya Jaya Myra says, "There is no such thing as a 'perfect' relationship. Relationships are just that: relations with you and another person, and that takes work. If it were solely about love and caring, it would be called a loveship, not a relationship." That's why you shouldn't give up or feel like you're with the wrong person, just because things aren't 100 percent happy. Ideal situations like these simply don't exist.

So, when things get difficult — possibly due to money issues, health problems, or a misunderstanding or two — don't throw in the towel. If your relationship has a few of the traits below, it's likely you two are going to be OK. It just may require a dose of understanding from both sides, as well as some extra work to make things, well, work. And, more often than not, that's totally worth it.

1. You Know How To Help Each De-Stress

Like I said, life can be tough and relationships can be rocky. But if you both retain the ability to laugh about it all, you'll likely be OK. Do you watch movies to de-stress? Or make each other laugh? "These shared experiences help couples connect in essential ways," says relationship therapist Julienne B. Derichs, LCPC. "It helps you learn how not to take things too personally, which is so helpful in any long-term relationship."

2. They Always Make You A Priority

If your partner makes you a priority in life, that's an excellent sign they're good for you. "We all have a lot pulling for our attention these days so if you’re still at the top of the list when times are rough, that’s a sign that your partner still respects and holds you dear," relationship coach Audra R. Upchurch tells Bustle.

3. Your Partner Has The Utmost Respect For You

As I said above, respect is another foundation of a healthy relationship. "Respect can carry your relationship a long way, especially when emotions are tested," Upchurch says. "Don’t allow momentary difficulties to cloud your judgement." If they still have that R-E-S-P-E-C-T, then you should consider keeping 'em around.

4. You're Both Still Willing To Make An Effort

The moment your partner doesn't want to put in the work is the moment you'll know they've got to go. But, if they are willling to work things out, think twice. As Upchurch says, "The desire to continue fighting is huge! That means you both still feel and see a future together, even if the vision is cloudy. There is something there that is worth holding to."

5. You Trust Them And Feel Secure In The Relationship

It's OK if you two don't see eye-to-eye on everything, as long as there is a sturdy foundation of trust. "If you can trust your partner it's a good sign they are right for you," NYC-based therapist Kimberly Hershenson, LMSW tells Bustle. If this doesn't ring true, however, it may be time to rethink things.

6. They're Always There To Listen And Offer Support

Another sign of a healthy relationship? An ability to give and accept support. If your partner asks how you are doing, and listens to your problems without judgment, it's a good sign they've got your best interests at heart, Hershenson tells me. And that's the sign of a good match.

7. Fights Are Always Rational And Fair

While it's OK to argue, it's not OK to fight dirty. So consider your partner a keeper if they know how to argue in a healthy way with you. "When you have a fight not only do you and your SO fight fair ... but ... you know how to repair after and during an argument," Derichs says.

8. You Communicate Clearly And Honestly No Matter What

It's been said a million times, but communication is where it's at when it comes to healthy relationships. So, if you and your partner know how to talk (and listen), then you're likely good for each other. "They make time and effort to communicate clearly and honestly, no matter what," Myra says.

9. You Both Remain Optimistic, Even In Tough Times

Life can get as rocky as it wants without destroying your relationship, as long as you both know how to remain optimistic. "Choosing to remain open and optimistic is a foundational piece of success that will allow for a resolution in all things," Myra says. "If a person gets stuck in their ways or ideas, working through things is difficult. If they are open to possibility and really hearing what you have to say, improvement is nearly guaranteed." And that's the key to long-term success.

10. Most Problems Exist Outside The Relationship

Things like family troubles, money issues, or a loss of a job can really impact your relationship — and maybe even lead to a few arguments. But that doesn't mean you two aren't meant to be together. "All of the above circumstances have to deal with how the couple handles life issues and not whether or not they are actually compatible," says dating expert Kevin Darné. "Granted, sustained difficult times can cause one or both people to want to throw in the towel. But as long as they're not both feeling that way at the same time there is hope."

11. Your Partner Shows A Genuine Concern For Your Well-Being

At the end of the day, you're with the right person if they make it obvious how much they care — even when things aren't so fun. "Love doesn’t disappear because times are rough," Upchurch says. "If your partner can look beyond what’s going on in the relationship and still be there for you as a person, this is someone you might want to hold on to, even during difficult times."

12. Neither Of You Try To "Win" Arguments

There are few things more toxic than a partner who wants to win an argument at any cost, so take note if yours seems to be OK with being wrong. "Having problems and talking them through, even if you just agree to disagree, is a sign that you’re with the right person," marriage and family counselor Art Jackson tells Bustle. "When it comes to arguments, it’s less about 'winning' and more about learning how to communicate your point effectively."

13. You're OK With Spending Time Apart

The healthiest of partnerships consist of two people who are cool with spending time apart. So count yourself among the lucky if you know how to give each other space. "That gives you time to do your things," spiritual counselor Davida Rappaport tells Bustle, which is a huge key to success.

And a sign that you're with the right person.

More like this
21 Signs You're Not In Love Anymore
By Sara Altschule, Kathleen Ferraro and Carolyn Steber
5 Sneaky Signs That You're Dealing With Narcissistic Gaslighting
By Lexi Inks
10 Ways To Be More Empathetic To Your Partner
By Raven Ishak and Lexi Inks
Think Your Partner Is Cheating? These Tarot Cards May Confirm Your Suspicions
By Kristine Fellizar
Get Even More From Bustle — Sign Up For The Newsletter