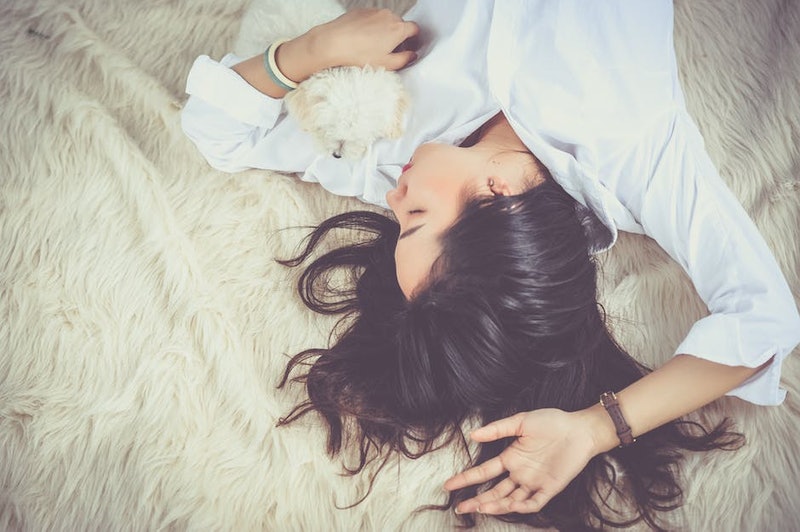 I think we can all agree that sleep is strange. As you lie there, unconscious, your brain waves change, your eyes dart back and forth (known as "rapid eye movement" or REM), you have vivid dreams, and you might even get up and walk around. These are a few well-known things that can happen to your body while you sleep, but they hardly begin to scratch the surface when it comes to what else can occur during the night.

It may sound weird (and kind of scary) that so much goes on while you're totally unaware. But when you think about sleep and what it does to the body, it starts to make more sense. "Our body hits the brakes," Adam Tishman, sleep expert and founder of Helix, tells Bustle. "Your heart rate falls, blood pressure drops, and breathing slows. Your body temperature also lowers one to two degrees. Your muscles go into a weak state called atonia. Because of this, your body can do all kinds of weird things through the night."

Odd things can happen during the first few moments of sleep, when you're just on the edge of drifting off. And lots more can happen hours later, once you're in those deeper dream stages. Read on for some interesting examples, so you can finally know just what happens when you sleep.

1. You Might Experience The Nightmare That Is Sleep Paralysis

If you've ever felt paralyzed in a nightmare while right on the edge of sleep, it's likely you experienced "sleep paralysis" — and it was probably downright terrifying. "If you get stuck in this state ... you will be asleep enough to think [you're having a] dream, but awake enough to know you are in bed and can't move," professional dream analyst Lauri Quinn Loewenberg tells Bustle. During these moments, some people swear they see ghosts, shadow people, or demons standing on their chest. "This is only a hallucination caused by the amygdala being highly active." But still, terrifying.

2. Your Whole Body Shuts Down And You Become Paralyzed

As mentioned above, your body becomes paralyzed once you enter REM (or the dream stage) of sleep, about 90 minutes after nodding off. "At this point the neurotransmitters gamma-aminobutyric acid (GABA) and glycine switch off the specialized cells in the brain that allow muscles to be active, thereby literally paralyzing your skeletal muscles," says Loewenberg. "This is a nifty built-in safety mechanism so we don't get up and act out our dreams." Once you're asleep and dreaming, you'll have no idea you can't move. But it may explain why you sometimes have to "pull yourself out of" a dream if you wake up suddenly in the middle of the night.

3. It's Possible To Orgasm During A Sex Dream

We've all heard about "wet dreams" for guys. But did you know they can happen for us ladies, too? "Sex in a dream feels very real and an orgasm can soon follow," Loewenberg says. "The body doesn't know the difference between a dreaming event and a waking event so it will react the same." Pretty cool, right?

4. Some People Stop Breathing (Just For A Few Seconds)

On a way less fun note, some people have a serious medical condition called sleep apnea, which, as Dr. Scott LeSueur tells me, causes you to stop breathing for periods of time during the night. The condition affects up to 25 percent of the population, and often needs to be identified and treated by a doctor at a sleep clinic. Two things that might tip you off to a problem: waking up snoring, and feeling totally exhausted during the day.

Ever feel like you're falling right as you drift off to sleep? "This happens in the transitional period between wakefulness and sleep and is called a hypnic jerk," says Tishman. "It’s an involuntary twitch associated with rapid heartbeat, fast breathing, and sweating." And it can cause you to literally jerk back awake.

6. It's Possible To Get Up And Act Out Your Dreams

For some, that paralyzing safety measure might not kick in, causing you to move during your dreams. "REM sleep behavior disorder is a condition where one actually physically acts out dreams, both good and bad, with sounds and sudden movement during their REM cycle," Tishman says. Kinda weird/kinda scary.

7. Snoring Can Become A Major Problem

Some people snore, while others truly snore. As Tishman tells me, this annoying issue is all thanks to your body relaxing during sleep, which causes the muscles in your throat to become floppy. As you breathe, those muscles vibrate around, causing the snoring sound. And the narrower your throat, the louder the snore.

8. You Body Turns Off Some Of Its Senses

If you think the scent of an amazing breakfast (or something scary, like smoke) will wake you up, don't count on it. "The deeper the sleep, the harder it is to rouse someone by smells," Tishman explains. "Though this is debated, it is thought that the sense of smell shuts down during sleep. That’s one reason why smoke detectors are so critical — there’s a good chance that the smell of smoke won’t be enough to wake you up."

If you feel like you need to move your legs once in bed, it may be a sign of a weird condition called Restless legs syndrome. "You’re not supposed be running a marathon all night, every night," Jacob Teitelbaum, MD tells Bustle. "Yet, that’s what it’s like for people with Restless legs syndrome, where their legs are running all night." He tells me RLS is a movement disorder caused by an inadequate amount of the neurotransmitter dopamine, which might be due to an inadequate amount of iron in your diet.

10. It's Possible To Have Some Pretty Horrific Nightmares

Nightmares can happen for any number of reasons. But some are truly scary ones — like the kind that wake you up in a sweat — might be due to low blood sugar. "This is especially so if you get 'hangry' ... during the day," Teitelbaum says. If this sounds like you, it could explain why your brain turns into a horror movie once you fall asleep.

I've been known to grab a snack in the middle of the night, but did you know plenty of people do so without ever waking up? "While sleeping, some people engage in nighttime binge eating," Pete Bils, vice president of sleep science and research at Sleep Number, tells Bustle. "This tends to happen during light sleep."

12. Some People Have Been Known To Text

If you have some unexplained text messages on your phone, it could be due to a late night sleep-texting session. Which is apparently something people do. "Research from Villanova University found that at least one third of students were found to hear and respond to texts while they were asleep," Bils says. "This tends to occur during REM sleep." Yikes.

If you're a sleepwalker, you will literally climb out of bed (usually during light sleep) and walk around your apartment. Bils tells me many sleep walkers also talk, and some even have their eyes fully open. If you know someone who sleepwalks, Bils tells me the classic advice is true — do not wake them up. It will only prolong their sleepwalking episode.

I mean, is there anything weirder than that?

More like this
15 Easy Pranks To Play This Halloween
By Emily Kelley and Lauren Grant
10 Stranger Things-Inspired Halloween Costumes For True Fans
By Emma Carey
Bobby Berk Explains How To Maximize Every Inch Of Your Bedroom Storage
By Marilyn La Jeunesse
21 Signs You're Not In Love Anymore
By Sara Altschule, Kathleen Ferraro and Carolyn Steber
Get Even More From Bustle — Sign Up For The Newsletter