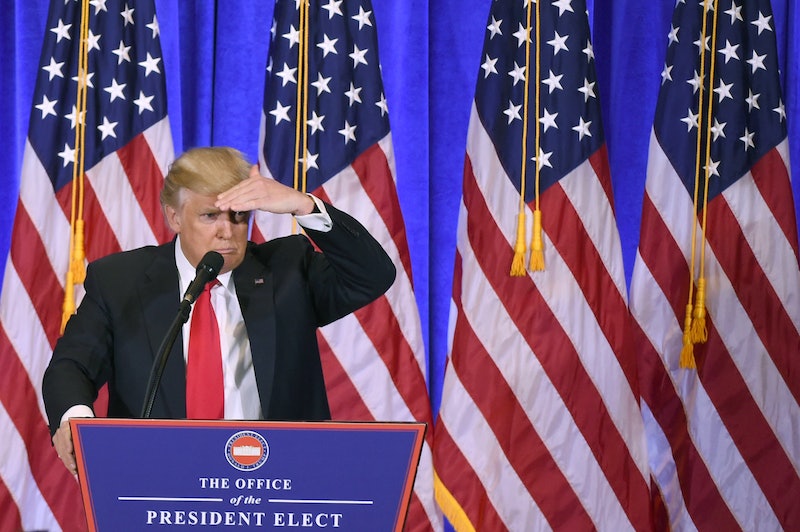 The President-elect's long-awaited press conference on Wednesday afternoon went in several different directions as, after a brief statement, Donald Trump took questions from reporters. He stepped aside at one point to let his lawyer take the podium and discuss his business and conflict of interest issues. But he was there in true Trump fashion, offering plenty of new eyebrow-raisers, such as saying the public doesn't care if he releases his tax returns, comparing intelligence leaks to Nazi Germany, and calling BuzzFeed News a "failing pile of garbage."

The entire press conference took place beside a giant pile of papers and manila folders that Trump said were "just a piece of the many, many companies" he will be turning over to his sons Eric and Donald Jr. The event was broadcast by CNN via Facebook Live, but no doubt one of the more entertaining ways to keep up with Trump's remarks from the press conference was on Twitter.

He had barely taken his first breath at the podium before jokes about his first press conference in 169 days began flying online. And boy were there some winners. Check out some of the funniest tweets about Trump's latest face-to-face encounter with reporters:

On His Promises To The American People

On Reporters And Media Outlets

On The Press Conference Overall

This latest press conference has given the world ample material to parse through for clues as to what Trump's impending presidency promises next. And despite his and his lawyer's reassurances, questions about the President-elect's businesses and the conflicts of interest they could hold will continue to plague him as he takes office.

Undoubtedly, this event was a serious one with very real implications for the American people and international relations with the United States. Still, when faced with a presidency as monumental and unprecedented as Trump's will be, using humor to process it all can't be avoided. Twitter and other social media outlets will continue to be abuzz with serious concerns and jokes alike about the press conference for days to come. Luckily, living in the hyperconnected, global community of today, the internet, and Twitter especially, offers millions a platform and avenue to appeal to.